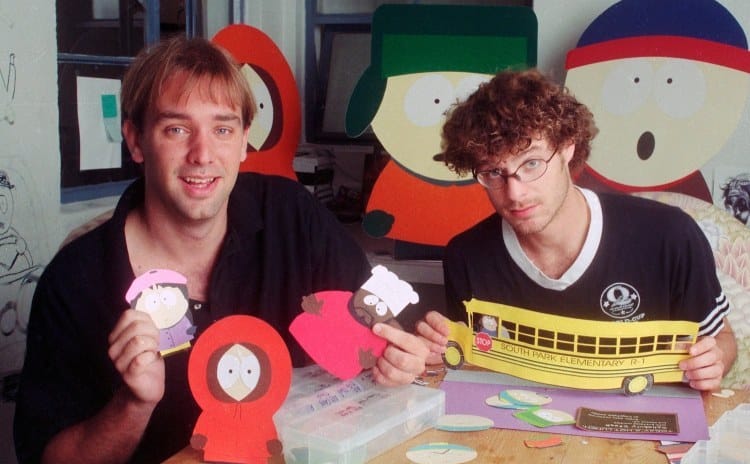 In every screenwriting class, you are going to learn about many rules. However, the most important one is always the same: give the story energy to keep the viewers engaged. Keeping an audience entertained is, after all, the entire purpose of a story.

However, everyone who has ever tried to write a script will have found themselves in a position where maintaining a constant engaging narrative that relates to the audience and has a logical flow to it is hard work.

Thankfully, there are some tricks and tips that can help writers out in such situations. In this article, we will be looking at the “but and therefore” rule. This is a method to ensure energy, continuation, and connection in a script.

To understand this rule and ensure a good grasp of how to use it we will follow three steps:

The “But and Therefore” Rule

The same happened to professional screenwriters Trey Parker and Matt Stone, best known for South Park. When they hit their first success with South Park, they soon felt the pressure to live up to the hype. But when they had to develop more brilliant episodes they found themselves stuck.

So, the question was how to get out of this writer’s block and keep an engaging narrative. This is where the “but and therefore” rule comes into the story.

What is the But and Therefore Rule?

The rule consists of a simple approach of replacing the words “and then” with “but and therefore” in a story.

Here is a simple example to convey the idea.

As this example shows, the simple use of but and therefore creates tension and helps create a flow of circumstances and consequences in the narrative structure. The events that take place suddenly aren’t happening because of the writer’s desire. They happen due to a chain reaction from what happened previously in the story.

Why Use the But and Therefore Rule?

So the rule is a great trick to prevent writer’s block during the production of a script. Whenever there is a new event in the story, you can simply think of an obstacle that can come in the way of what the character wants. As a consequence, the character makes a decision or action to work through that challenge.

This can also help avoid dull and passive stories. In the process of writing a story, most people fall into the routine of writing in a list format. They write as if they were preparing an essay rather than a piece of entertainment.

Even though this makes a story clear, it is not always a useful approach as it dulls down the narrative structure and can leave the viewer uninterested after a few scenes. Parker and Stone’s approach facilitates achieving a lively and entertaining story. By creating obstacles to the character’s dramatic wants and forcing them to come up with clever solutions in order to achieve their goal, they produce an exciting story the audience wants to take part in.

The But and Therefore Rule Throughout Time

Even though Parker and Stone defined the rule with a name and a clear explanation, the rule can be traced back to thousands of stories many years before the South Park creators gave it a name.

To avoid the feeling that events happen in random order and out of nowhere during a story without a cause or consequence, writers have needed techniques to help create a logical story flow where one point connects to the other.

To identify the indirect use of the but and therefore rule we are going to look at some examples. Specifically, let’s look at famous pieces of literature that have their own film adaptations. These examples prove how the but and therefore is essential to all forms of storytelling, not just screenwriting and not just South Park episodes.

The events in Romeo + Juliet do not happen by accident, they are all part of a calculated flow. This is recognizable in the overall outline of the story:

Moreover, the rule is also used during specific events.

Every event is connected to the previous one via the use of the but and therefore rule. The narrative is consequential, each strand of the plot leading to another.

Harry Potter and the Philosopher’s Stone shows another great use of causes and consequences in the outline as well as in specific scenes.

If we want to take a look at a more specific event, then the Halloween feast is a great example.

In this example, the but and therefore rule prompts Harry into action. This is vital to the agency he has as a protagonist. Harry is a protagonist that is right at the heart of the action at all times. And it’s consequently vital that he’s thrust into this action in a believable and logical manner.

The But and Therefore Rule’s Complexity

The examples above provide a very clear and simple understanding of the rule’s usage. However, the above examples are also relatively straightforward and uncomplicated.

What happens if a writer wants to create a more complex story with a narrative arc that is not in chronological order? How would the causes and consequences that this rule establishes be incorporated in a story where the first scene we see does not directly connect to the scene that follows?

Let’s analyze the rule in two famously non-chronological films and prove the but and therefore rule’s wide-ranging applicability.

Memento follows a man who suffers from anterograde amnesia and is trying to hunt down a man who, he believes, killed his wife. Due to his amnesia, he resorts to tattooing important information on his body in order to remember it after each blackout.

The But and Therefore Rule in this Timeline

Consequently, how does the but and therefore rule apply to this narrative that mixes scenes that do not directly correlate to each other? Well, the rule is there but the viewer must do a bit of detective work to find it.

If we take the first two scenes we see, we won’t find a correlation. The film starts with the main character, Leonard, taking a polaroid picture of a man who he then shoots (scene in color). Then we jump to Leonard waking up in a motel room (scene in black and white). From these two scenes, we don’t have a direct use of the rule. If we tried to apply the rule now it would not make much sense.

That has little continuity.

Still, when we start to go deeper into the movie, the scenes will start to connect. The third scene of the movie (a scene in color) shows Leonard with another man (Teddy) going to a warehouse. When they arrive Leonard reads from one of his polaroids a message saying he needed to kill the man. Thus, he shoots Teddy. So, here we have our first connection using our rule.

The third scene we see is the one that gives us the context for what happens in the first. On that account, the rule applies, we just needed to wait to understand which scenes connected to create the causes (but) and consequences (therefore).

This final example again has a more complex narrative structure than the first two films analyzed above. It does not have a typical chronological structure. However, it is not quite as complicated as Memento.

During the first scene, (the first sequence) two of the main characters, Vincent and Jules, have breakfast at a diner, with a suitcase.

So, how did we get from sequence A to sequence B? Let’s try to apply our rule…

The But and Therefore Rule in This Timeline

The rule could make sense in this written context. But, seeing the sequences on screen, we know that the connection the rule tries to establish does not correlate logically with these scenes.

However, what happens if we include sequence C? Sequence C is actually the sixth episode in the film, and it shows the aftermath of the accidental death of the character in sequence B. Here Vincent and Jules are trying to get rid of the body of the person they accidentally shot. Taking this new information into consideration the rule can apply to unify sequences B and C.

Hence, the rule once again applies, continuity is created, and the story is interesting because there are causes and consequences in the events. In this context, the but and therefore rule proves vital in piecing together a complicated narrative structure, where it’s not always initially clear who we are following and why.

The but and therefore rule is one of the simpler screenwriting techniques to apply. At the same time, it is also particularly versatile. One can utilize the rule for complex narrative structures or for simple, chronological scenes.

Adopting this rule into your scriptwriting process is a great practice as it can get you out of a situation where you do not know what to write next. Furthermore, it will create a natural flow and energy for the story at hand. Removing “and then” with “but and therefore” is perhaps as easy as it gets in the hard and complicated process of creating a script.

Of course, that doesn’t mean that the natural answers will flow straight away. But this technique can be a key way to give your narrative the spine it needs to support a convincing and natural story. Ideally, it will set you on a path to creating the beats your audience needs to maintain engagement.

The but and therefore rule is really just a way of forcing you to ask why. Most importantly, why will the audience be compelled to watch and keep watching?

This article was written by Valentina Vlasich and edited by IS Staff.