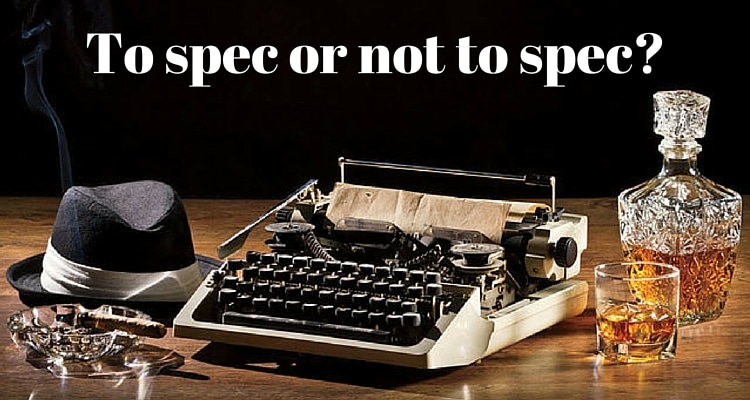 Something For Nothing – Writing Spec Scripts

There’s a terrific viral that periodically does the rounds where a restaurateur advertises on Craigslist for a solo musician to play in his restaurant for five nights a week, with a specific set list, in exchange for free publicity and exposure. It’s a prescriptive little advert that ends up leaving you feel like the favour’s on the author and very much not the other way round. Seeing this, and clearly furious about it, some very clever dick responds as such:

“Happy New Year! I am a musician with a big house looking for a restaurateur to promote their restaurant and come to my house to make dinner for my friends and I.  This is not a daily job but only for special events which will eventually turn into a nightly event if we get a positive response.  More fine dining, exotic meal, and mixed ethnic fusion cuisine.  Are you interested to promote your restaurant? Reply back ASAP!”

Ha ha ha ha, we laugh, the cheek of it! Imagine asking someone to come and make not just free food for you and all your mates but to specify exactly what kind of nosh he expects on his table, the exact hours he requires you and, on top of all that, you are left with the feeling that you should be grateful for the experience.

Or not. I have a lot of imaginary property in the land of the free. A wasteland where the phrase, “have you ever thought of just writing it on spec?” is given to you with the reverence of the recipe for alchemy.

I am not proud to say that it has been a very long time since someone spontaneously offered to pay me for my ‘talents’ just off the bat but this is the way of our world.  To get anything away these days you have to be willing to give it up for gratis upfront.

Let me, as ever, just qualify this. I am a big fan of the spec. I wrote my only credited and produced movie on spec. I had no-one to answer to as I wrote it, no deadlines, no boxes to fit in, no notes to argue with, no people to wait for.

The freedom was immense and enjoyable, and the rewards were veritably reaped. The door had opened and I was in. Except I wasn’t, you idiots. What do you think this is? Paramount Studios, 1949? I haven’t even got the address of most of the doors and if, by chance, I am invited over it’s to hand out the drinks whilst others dine, or in my case, the gossip whilst others listen.

Everybody is expected to work for nothing nowadays in our type of industry so that the cash cows can try before they buy.

I am more than happy to do a couple of pages in order to give the producer, and the moneyman who holds the power and payment I so desire, a flavour of just how brilliant my dish will be.

The problem with things that are potentially delicious and filling is that, as we all know, one spoonful is never enough. They want more. Of course no-one wants a document that ends with “And madness ensues dot dot dot” because that madness section sounds like the best bit! But to come up with the entire third act is an awful lot of work and suddenly there’s a deadline on you because they’ve heard that everyone in the entire English speaking world has had the same idea as you.

To get that ensuing craziness down on paper means that the first act needs clearly setting out, which by virtue dictates that the journey to get there has to be sorted to boot, which is obviously the whole midsection, and oh, look, you’ve just done a beat sheet for the entire thing and it was, after all, the butler wot did it in a series of twists you wish you’d had more time to come up with.

Now, though, time will stand still. Six weeks go by as you wonder how you got cajoled into committing an entire movie treatment to an awful lot of your own printer paper for absolutely no money whatsoever before a call comes from your embarrassed producer and you can tell merely from his hello that he’s been putting this arduous task off for a few days. You, however, must feign an air of joyous nonchalance because nobody wants to work with a misery guts.

“Oh, they hate the butler character and were going to ask for him to be cut out if we ever went any further with it but, now they’ve seen he’s the linchpin to the entire thing, they don’t think it’s for them…(horrible uncomfortable pause)” Awwww, they thank me for showing it to their company though? That’s soooo nice.….it was… nothing…it was only…two months work to get there and my drawer had a space for more spent ideas anyway so…I’ll…(holds back tears until the embarrassed producer shoves off never to be heard from again).

Ok, so that’s a worst case scenario that’s only happened to me five or six times in my entire career. I’m just trying to harden you so that you’re prepared for the inevitable. It’s too nice a job. There are too many of us wanting to do it and not enough gigs to go round. Things are too expensive to make to take risks on guesswork so something had to give.

Here’s the upside, however. A writer’s gotta write. The more you do it, the better you’ll get. The more work you put in, the more the world allows you to take you.  One day, it’ll be your turn and the old movie adage “if you build it, they will come” really will start to work out.

Last time I was in LA, a very well known company offered me an idea of their own to spec. It was a privilege that they liked my writing enough for me to try out my stuff on one of their ideas and I knew that but, in the end, I decided to get my own projects down on paper instead. I duly did so and one of them’s not a bad little idea when it’s all said and done.

My UK agent sent my 16 page pitch for that movie out – with a caveat that it needed ‘fleshing out a hell of a lot more’ – to a very cash rich international company not so long ago and it was with great excitement that I found out I had a meeting on it (and hoped it wouldn’t be like some other meetings I’d experienced).

Therefore, I am thrilled to tell you that if the person two above the girl I got to meet, likes it they will aid my speccing of it with their house guidance and notes until I have a script.

I have to say that, despite everything, I am somewhat excited by this prospect. As I said, a writer’s gotta write.

Tamzin Rafn is a screenwriter and former Development Executive, represented by Independent Talent in the UK and WME in LA. She wrote ALBATROSS and worked in the main vein of script development in the UK at an organisation of note. No she cannot read your script, Industrial Scripts do that and do it well thanking ye kindly. You can follow Tamzin on Twitter and you can check out her IMDb profile.

If you enjoyed this article, why not check out our article: Screenwriters and The Flash of Genius?