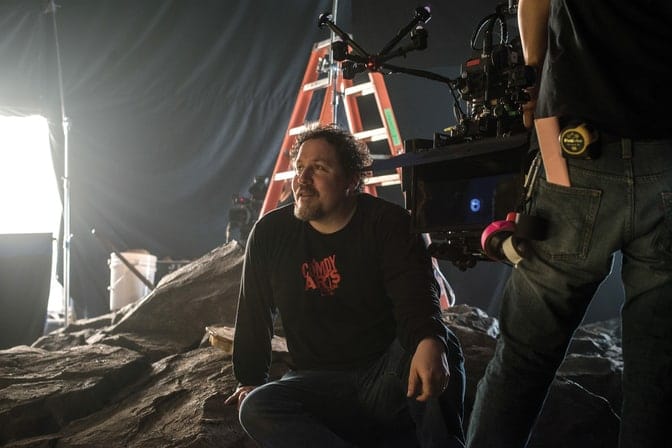 Where to start with a filmmaker, actor, producer and writer as malleable and prolific as Jon Favreau? The multi-talented director behind Iron Man, the Mandalorian and The Lion King has been at the top of the industry for decades.

In light of this, we’ve compiled 15 inspiring Jon Favreau quotes to demonstrate the expertise and wisdom this titan has to share.

Most people credit Swingers with introducing Jon Favreau to the film and TV world. Whilst it was not strictly his first work, it’s certainly what brought him to the attention of Hollywood at age 30. He wrote the screenplay for the film as well as starring in it.

Whilst this established Favreau as a working actor, helping him secure a variety of roles such as in Friends, Deep Impact and Love & Sex, it would be another five years before he made his directorial debut with Made.

Despite establishing himself as a well-recognised and well-regarded actor, it would ultimately be as a director that Favreau would make the most impact in the industry. It was perhaps a surprise, considering his previous work, when he turned up directing family-friendly movies such as Elf and Zathura.

It would be the beginning of a journey into mastering this genre, creating stories that entertain both adults and younger audiences, and capturing the market for big broad, cinematic storytelling. Iron Man, Cowboys and Aliens, The Lion King, The Jungle Book – these films proved that Jon Favreau had an instinct for accessible and entertaining movies. It was perhaps this track record that led him to helm the latest iteration of the granddaddy of this genre, Star Wars, with The Mandalorian.

In addition, Favreau has also shown himself to be at the forefront of the latest cinematic technology. In The Lion King and The Jungle Book, he helped steer the latest and best visual effects technology, whilst The Mandalorian has won praise for its innovative use of virtual production.

So how does this great mind work when it comes to screenwriting and filmmaking? Well, we’ve complied 15 of the best Jon Favreau Quotes to give an insight into his approach.

1. “Every time I’ve taken a risk it’s paid off. Maybe not in the way I thought it would. But I’ve always come out of that experience knowing more and once you’re comfortable with failure then there’s nothing that can be done to you. I’ve never done cautious.”

2. “I’m a very lazy person by nature. I have to be really engaged, and then I go straight from lazy to obsessive. I couldn’t study chemistry, but I could memorize all the books for Dungeons and Dragons. It was ridiculous. The trick is to find what I like to do.”

3. “Between the theme parks and the movies, the Disney iconography was probably the first set of archetypes that I was exposed to. Walt was able to expose me as a child to the full array of emotions, including fear and sorrow. Those movies and attractions haunted my dreams and made a deep impression on me as a child.”

4. “I’ve been watching the way they do it at Pixar, for many years and been really impressed with the work that they’ve done and every time I’d hear interviews or talk with people like John Lasseter, who I’ve known for many years, they would always say the same thing. I would ask them technical questions and they’d always go back to story. How do you do the visual effects? How do you render this and that? Story, story, story. That’s all they care about. And the way they explore story is through both writers and the story department.”

5. “Get the shading right, the lighting right, and there are things you can do to make the CGI look more real. People end up going crazy and give themselves a little too much freedom in how they use CGI, and if you overuse it, it draws attention to itself.”

6. “My fascination is with where technology and storytelling overlap. Méliès, the Lumière brothers, Walt Disney, Jim Cameron. It comes from the tradition of stage magic. When you have a tech breakthrough like Star Wars, like Avatar, like Jurassic Park, people’s minds go into a fugue state where they just accept this illusion as reality.”

7. “Part of what’s so beautiful about the lighting and camera work and shots is that we were able to inherit the full artistry and experience from our fantastic team (on The Lion King). It’s nice to see technology as a way to progress and not just as a way that’s going to change everything that came before. There’s a balance between talent and innovation.”

Jon Favreau on… the Realities of the Industry

8. “There is no free lunch, so if you’re playing with the big train set – on big movies – it’s a lot of money they’re entrusting you with, and you have to get that money back for them. I don’t take that responsibility lightly.”

9. “Unfortunately, we are not painters and authors, where we can do something in isolation. We require a lot of money to create what we create. It’s almost like being an architect: You can’t be an architect and build whatever buildings you want to.”

10. “I’ve been very lucky that I’ve been able to make decisions purely out of what I wanted to do and what I thought would be creatively best and what had the best shot at being a good movie. That doesn’t mean you’re guaranteed to be making a good movie, but, at least, if you’re going in thinking you can be doing something good, your odds are better than if you’re coming into a situation where you’re compromised.”

11. “People think bigger movies are bad, and that’s just not true – there’s bad big films, and there’s bad little ones. The bad big ones have to make their money back, so they’ll push them down your throat, but the little ones just disappear if they’re bad.”

12. “I like a naturalism to my dialogue and my comedy. I would rather have a few jokes sail by that might be more subtle than have every single joke hit hard. I’d rather the comedy come out of character as opposed to feeling forced. Even if you’re giving some laughs up for it.”

13. “I feel like all high concept movies are intrinsically ridiculous. That’s the whole idea of high concept. You’re taking a crazy situation and you’re bringing reality to it. That’s every high concept film. That’s every action film. A guy makes an iron suit. A guy injects himself and turns into the Hulk. Trucks turn into robots. The trick for the filmmakers is you gotta make that emotionally accessible experience into something that has a character arc.”

14. “I like the image of the Mandalorian because it really hearkened back to the Westerns and samurai films that had originally influenced Lucas…It’s a deconstructed version of Clint Eastwood in ‘The Man with No Name.’ That’s a great, mysterious, fun character to see the world through.”

And Finally… Jon Favreau Inspires You to Make Your Film!

15. “Nowadays, there’s no excuse. If you want more creative control, just go smaller. Back at the time we made Swingers, it cost six figures to make a movie. Now you could make a movie now for hundreds or thousands. They’ll be small, they’ll be digital, you’ll be editing it on your laptop, but you can make a movie.”

Enjoyed our list of Jon Favreau quotes? Why not have a look at our other quotes articles, such as Phoebe Waller-Bridge and Guillermo del Toro.