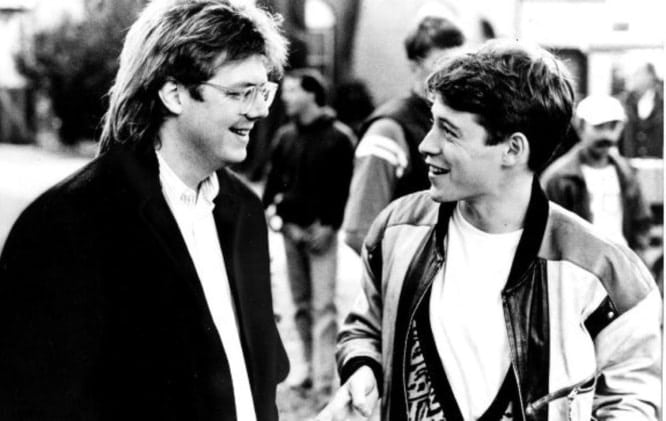 John Hughes influenced the cinema landscape immensely largely during the 1980s. His most beloved movies include The Breakfast Club, Ferris Bueller’s Day Off, Sixteen Candles and Pretty in Pink. But he continues to influence writers and filmmakers to this day in the way he captures that most universal of experiences – teenage life. So we’ve put together 15 John Hughes quotes that are timeless in their ability to inspire writers and filmmakers.

The many works of John Hughes were often inspired by his childhood and upbringing. Hughes’ childhood was filled with multiple relocations, meaning he was quick to adapt to new and unfamiliar situations. It was attending different high schools that developed the acute insight that make his films resonate.

John Hughes started his career as an advertising copywriter in the 1970s after dropping out of the University of Arizona. He then moved to New York to work as a regular writer for the National Lampoon Magazine. Here he was known as a hard worker and a quick writer.

Alongside this success, his directorial debut, Sixteen Candles (1984), established his long-running relationship with young actors, Molly Ringwald and Anthony Michael Hall. Both also co-starred as leading actors in The Breakfast Club (1985).

Planes, Trains and Automobiles (1987) marked one of his biggest hits of that era and established him as a skilled comedy director away from just the territory of teenagers and high school.

Ultimately, despite his fame as a master of the teen genre, the scope of his work is vast. All his films could arguably fall under the umbrella of ‘family film’. However, within this, his films cover a wide range of topics. From a more serious tone in Uncle Buck to the farce of Baby’s Day Out to the romantic comedy of Career Opportunities.

He sadly passed away in 2009, aged 59, with Drillbit Taylor (2008) being his last movie released before his death. However, the legacy he leaves behind is an expansive body of work. John Hughes remains an inspiring screenwriter because of his prolific output and his range as well as his insight.

His movies not only influenced the children of the ’80s but have an impact on all ages, still to this day. He captured something in his screenwriting that isn’t easy to – the essence of the coming of age experience. His films might be inextricably tied to a certain time period in terms of their setting and style. But they have an evergreen appeal in their characters, themes and emotions.

1. “My heroes were Dylan, John Lennon and Picasso, because they each moved their particular medium forward, and when they got to the point where they were comfortable, they always moved on.”

2. “Those who say you only live once have never read a book.”

3. “I so desperately hate to end these movies that the first thing I do when I’m done is write another one. Then I don’t feel sad about having to leave and everybody going away. That’s why I tend to work with the same people; I really befriend them.”

5. “Art goes a long way towards getting you through loneliness because you’ve always got your art to fall back on and it builds a certain amount of self-reliance. And I didn’t really much care what other people thought of me because I could go look at my work and say I like that, and I did that, and it was self-recognition.”

6. “When you’re in the middle of something it’s very hard to chronicle it, it’s much easier when you’ve been through it. You can look back and the wounds have healed, and things have been put into perspective. The highs aren’t so high anymore and the lows aren’t quite so low.”

7. “What a director should be doing is making it appear as though there was no script.”

8. “I borrow liberally from the past and the present. All this stuff, I’ve been witness to it first-hand or I’ve either gone through it or seen someone else going through it.”

9. “My main intent in directing is getting the performance from the actors to execute the story correctly and clearly. Fill it up with wonderful little performance pieces. I’m not a technical director, I’m not interested in lenses or the other technical aspects.”

10. “When writing a screenplay, you’re not done. You haven’t completed the idea. You’ve just taken it a certain distance. Then a director comes in and takes it the rest of the way. It’s very frustrating for me to take an idea halfway and give it to someone else to take the rest of the way. Not to follow the process through. When you’ve completed a screenplay you’ve only really completed part of a total project. I just want to follow the process all the way through.”

11. “I happen to go for the simplest, most ordinary things. The extraordinary doesn’t interest me. I’m not interested in psychotics. I’m interested in the person you don’t expect to have a story. I like Everyman.”

12. “I think any good comedy has to have a variety of styles. You don’t want to just keep hitting the same notes with jokes. I’d like you to smile. To laugh. I’d like you to chuckle. I’d like you to go grab the seat in front of you and shake it and scream with laughter. I want all of it. A balance of these different kinds of laughs.”

13. “It’s like being at the kids’ table at Thanksgiving – you can put your elbows on it, you don’t have to talk politics… no matter how old I get, there’s always a part of me that’s sitting there.”

14. “The thrust of my work has been ordinary people. It’s keeping it as ordinary as possible. As true to life as possible.”

15. “Characters are those people you’d be interested in meeting. I always try to tailor the speech patterns for the character. Not just the words that they say. But how they say them.”

Enjoyed our list of John Hughes quotes? Why not have a look at our other quotes articles, such as Donald Glover quotes and Tiny Fey quotes.

This article was written by Hannah Taylor and edited by IS Staff.