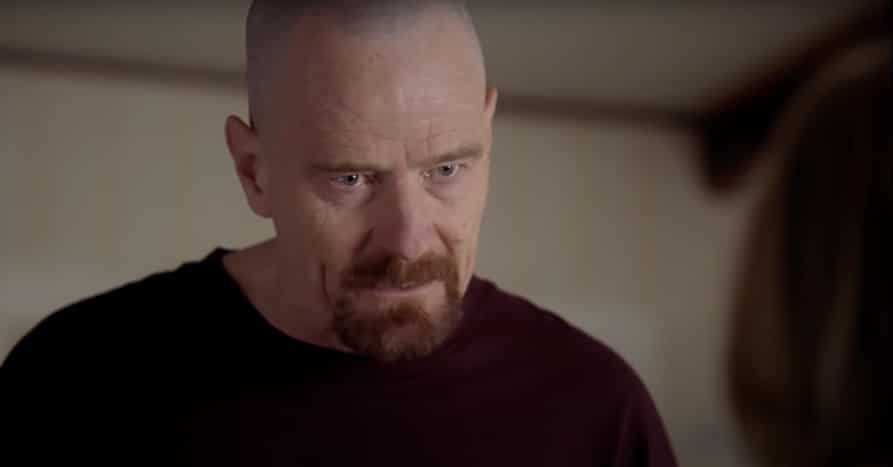 In this series, we’ll take a look at great, well-known scenes from films and TV. We’ll analyse these scenes to figure out what makes them work so well, what they add to the overall piece, and why they prove so memorable. Today, we’re going to take a look at the Breaking Bad scene – ‘I am the one who knocks’ (also known as the ‘I am the danger’ scene).

The character of Walter White has an iconic place in TV history. Whether it’s his shaven head & beard, character arc or pork pie hat and glasses, he’s a symbolic, iconic figure. When you hear ‘I am the danger’ and ‘I am the one who knocks’, you immediately think of Walter White.

This scene signifies perfectly how far Walt, as a character, has grown at this stage of the series.

First & foremost, what do we know prior to this scene?

Alongside Walt’s rise, his wife Skyler (Anna Gunn) learns about his new life. Subsequently, this begins the gradual decline in their marriage.

“I am not in danger, Skyler, I am the danger”

Finding out he has lung cancer gives him a new lease on life. He makes a deal with the devil, realising he can make lots of money quickly… just with simple chemistry.

But why is the ‘I am the one who knocks’ scene so important?

The Chemistry Teacher in Over His Head

In the scene, conflict stems right from the onset. Skyler talks down to Walt amid concerns for his safety. He objects, only for Skyler to raise a stern tone in return.

She digs into Walt, almost insulting him. But she is simply spelling out the reality, exposing his weakness. “You’re in over your head”. You’re not some hardened criminal, Walt”.

Walt doesn’t want to hear this.

He shakes his head, bewildered at her claims. Skyler continues, indicating everything Walt is – in over his head, desperate for money, roped into things.

Skyler: “That’s what we tell them, that’s the truth”

Walt: “That is not the truth”

He knows the truth, along with everything else he has done so far. We as the audience have seen it all unfold, but Skyler is blind to his.

Walt gets up, back turned, still allowing her to speak her piece. All until the use of a single word: Danger.

‘I Am the Danger’: Power or Pride?

It’s this exact moment, where the ‘I am the one who knocks’ scene reaches boiling point. Seeing that offended look on Walt’s face, we can see this is clearly the last straw.

Now is the moment where the audience sees the real Walter White. He’s power-mad, egotistical and stubborn. For his own wife to suggest he is in danger is a dent in his pride.

Furthermore, Skyler too refuses to concede Walt is a criminal. Even so, he is the danger…

Walt responds, “Who are you talking to right now?”. This showcases Walt’s delusions. Beginning to brag about how important he is and how much money he makes, Walt towers over Skyler.

“Do you know how much I make a year? I mean even if I told you, you wouldn’t believe it. You know what would happen if I suddenly decided to stop going into work? A business big enough that it could be listed on the Nasdaq goes belly-up, disappears, it ceases to exist without me.”

The Pacing of the ‘I Am the One Who Knocks’ Scene

What makes the ‘I am the one who knocks’ scene so remarkable is the shift in power between Walt and Skyler.

The moment Walt takes off that shirt, along with Skyler telling him to admit he is in danger, that is the calm before the storm. As soon as Walt turns around and speaks, he’s in total control, he could do anything to her, and Skyler notices this.

The moment he leaves the room, the audience is with Skyler as she trembles in fear. He is no longer the man she thought he was. It’s hard to distinguish who Walt actually is at this point. Is he still Walt? Or has he been consumed by his alter ego?

Even his own wife is now deemed unworthy to speak to him in such a way. At that moment, she no longer stares at Walt, but Heisenberg. Instantly, her concerns about Walt’s safety are flipped. Just in a brief moment of silence, & Skyler’s face, we see the realization. Clearly, she is now the one in danger.

Throughout Breaking Bad, characters are having to adapt to new situations and setbacks. It’s how they process these events that makes their development interesting to the audience.

When it comes to the series overall one can struggle to identify good guys from villains. This is perhaps the show’s primary agenda, to blur these lines. Aside from those completely outside of Walt’s operation (like Walt Junior), you could consider most of the key characters as villains, though all have some redeeming qualities.

When it comes to Walt and Skyler specifically, they’re both far from perfect at their core.

Taking a look back at the first episode, we see just that. A scared man in his underpants, about to end it all. At that point, he was everything Skyler said he was, ‘In over your head’. Now in S4 E6 (the episode of the ‘I am the one who knocks’ scene), he’s grown into something completely different, both personally & mentally. The worse aspects of himself have come to the fore.

Without a doubt, Walter White is one of TV‘s greatest antiheroes. With each episode, his personality grows darker, not to mention more flawed.

According to creator & producer Vince Gilligan, Breaking Bad is a southern expression meaning “to raise hell”. A perfect symbolisation of Walt’s character.

At this point, Walt’s ego has soared to the highest of hights. What Skyler doesn’t know is that Walt enjoys this lifestyle, the power it gives him. It’s an addiction.

“A guy opens his door and gets shot and you think that of me? No, I am the one who knocks!”

For a man claiming to be ‘the danger’, he’s found himself at the mercy of it several times. What makes Walt’s character beguiling and infuriating is the arrogance he possesses, along with the fact he is living on borrowed time.

It’s not about Skyler highlighting the possible danger imposed on their family that triggers him. It’s the claim that he’s in danger, which strikes a chord. Despite being adamant he is doing all of this for the family, doubts about their safety don’t seem to concern him.

Skyler’s doubts about his strength light the fire. It’s at this moment we know what Walt’s priorities really are. Power, strength, authority & money. All buried deep down to appease his fear of being weak and alone.

Whilst Walt has written his own story with Heisenberg, Skyler is still writing her own. Throughout the series, her role is constantly changing.

Like Walt, she gets a taste for crime and enjoys its benefits. One of the elements that makes Skyler such a well-written character is the fact she is somewhat of a hypocrite. Unlike Walter, who grows into Heisenberg, Skyler shifts throughout the seasons.

By the end of the ‘I am the one who knocks’ scene, Skyler realises who Walt really is, a hardened criminal – the very thing she said he wasn’t moments before. What the writer does so well is face Skyler with a choice, stay or run?

What Makes the ‘I Am the One Who Knocks’ Scene So Memorable?

The ‘I am the one who knocks’ scene is one of the standout moments in Breaking Bad overall. Walt has roamed far from the man we were introduced to in the very first episode.

In this scene, the journey of the series is not only completed but summed up. All the characterisation that has led Walt to this point is on display here.

It is no longer Walter White we see, but Heisenberg.

This article was written by Sam Lyne and edited by IS Staff.

Love Breaking Bad? The show’s producer, Karen Moore, is a judge of the 2021 TITAN Screenwriting Contest. Submit your TV show or movie script today for a chance to ensure Karen reads your script personally.

1 thought on “Forensic Scene Analysis: Breaking Bad’s ‘I Am the One Who Knocks’”