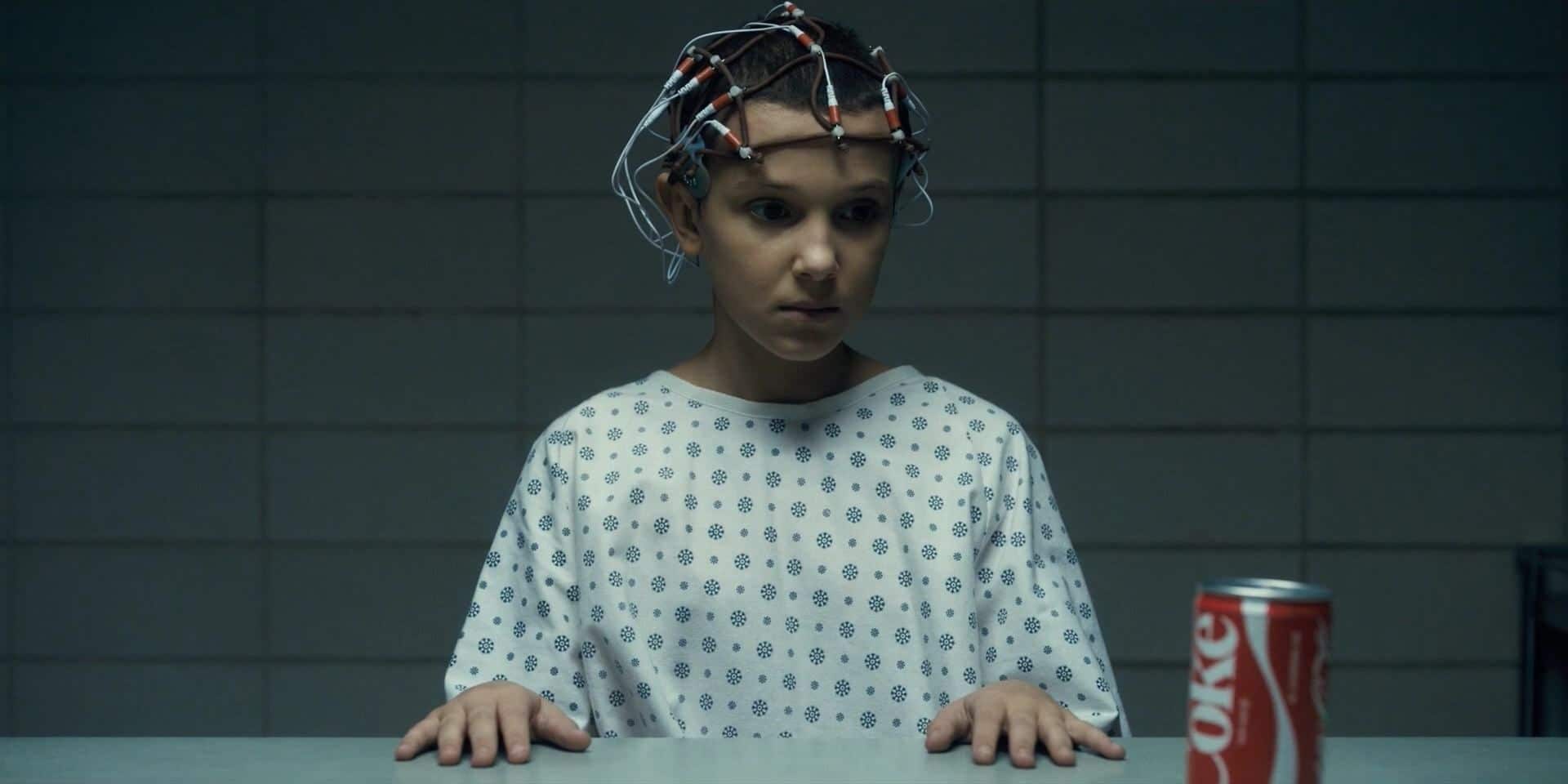 Welcome to Original Characters, an ongoing series of Industrial Scripts’ articles examining the most original characters to appear in both TV and film. This article will focus on Eleven from Stranger Things.

Whether plucked from real life, an amalgamation of real people or just simply a genius stroke of creativity, these are original characters…

The eighth in our original characters series will look at one of Netflix’s most beguiling heroines, Eleven from Stranger Things.

Who is Eleven from Stranger Things?

Eleven is arguably the most important character in Stranger Things.

The series is set in a small town called Hawkins during the 1980s.

Eleven’s unique history unfolds throughout the series as a whole. We first meet Eleven abandoned in the woods, covered in dirt, with a shaven head and in a hospital gown. Her lack of dialogue raises questions as to who she is and what happened to her.

With her minimal understanding of the world, it doesn’t take long to realize something strange has happened. Eleven’s time in captivity starts to unfold through the use of flashbacks. These help construct an understanding of her nature.

Eleven develops a stronger sense of self in Season 2. She takes it upon herself to find out about her biological mother. This takes her on an unexpected adventure, befriending a rebellious outsider group. Here, Eleven discovers her powers are stronger than she originally thought.

Then, in Season 3, Eleven starts to develop a stronger connection with Max – her first close female relationship. This season is when we truly see Eleven develop more conventional relationships within the group of friends.

From a timid scared outsider to a confident teenager, Eleven is the heart of the Hawkins crew and is crucial to their survival.

What Makes Eleven from Stranger Things So Unique?

Eleven’s uniqueness is created with minimal dialogue yet extreme emotion and conviction. Eleven’s charisma and intrinsic allure add to the sense of mystery that surrounds her. Additionally, her background and telekinetic abilities add to the uniqueness of her character, generating a desire to know more.

Eleven adds an extra layer to her personality and identity that we simultaneously explore with her in every season. This keeps an added quality to each season – what will we discover about Eleven this time?

Her withdrawn and wary personality is put to the test when she befriends the group of Hawkins boys to help find their missing friend. We quickly see Eleven’s character develop from a shy young girl to the series heroine.

Eleven lures the audience in. In many ways, it could be argued that the series is her series. She’s the one with the most significant change. She starts off as a captivating and mysterious presence who we want to know more about and ends as a more fully rounded and relatable character. Could Eleven be the protagonist of Stranger Things?

For characters to remain intriguing from season to season, complexity and depth are essential.

This craft is not easy. Staying true to the nature of the character whilst ensuring an element of relatability shines through, and the correct amount of mystery is a balancing act. Making sure characters have their unique qualities at the forefront compels the audience to want more than a surface personality.

Because of this initial push and pull, this breakthrough is deeply rewarding, making the audience feel that they have earned it.

Of course, Stranger Things wouldn’t be the show it is without the other key characters.

As much as Eleven is an essential protagonist in Stranger Things, the Duffer brothers composed characters who each have their own distinct narrative and are intrinsically intertwined with one another.

The majority of these characters have been a part of the series since the first episode. However, a few develop their way into the series later on.

Max is introduced in the second season and she mixes up the dynamic of the friendship group.

In the third season, their relationship takes a new turn. Max helps Eleven develop her feminine side after spending the majority of her time with Mike. Max demonstrates to Eleven some interests that might be typical of a teenage girl in this era.

Consequently, Max becomes important to Eleven’s character development. Their relationship helps Eleven grow beyond her relationship with Mike. We see a side to Eleven we haven’t seen before.

Hopper adopts Eleven in Season 2 as he finds her hiding in the woods. He takes her under his wing and houses her in his Grandad’s old cabin in the woods. This is when their relationship grows and an almost father-daughter connection is developed between them.

With Hopper having lost his biological daughter in previous years, he takes Eleven in as his own. Consequently, Eleven gets to understand a familial relationship, from love to frustration, for the first time.

Hopper’s fatherly love for Eleven is shown in a variety of expressions from making Eggo Waffle towers to sharing his heart-breaking past. Hopper also keeps Eleven away from her friends in Season 2 to protect her from danger. Though, this ultimately creates a strain on their relationship as Eleven feels trapped after a while.

Eleven and Hopper’s relationship is something inherently relatable. When we eventually see this parental bond break, it proves gut-wrenching. Seeing Eleven go through this kind of grief marks her journey from an otherworldly presence to a thoroughly human one.

From the beginning, Eleven develops a closer relationship with Mike compared to the rest of the group. Their initial attraction is evident as they spend more time together in Season 1. By Season 3 they have built and developed a genuine romance.

Eleven being away from the Hawkins gang for the majority of Season 2 allows her to explore her own self. This also happens when she dumps Mike in Season 3. We get to see a different side to Eleven when she’s away from Mike. The time apart adds to Eleven’s character arc, as she grows as her own person.

This being said, Mike helps Eleven start her development in Season 1. Mike brings Eleven’s personality out and teaches her about the world.

Eleven, in turn, also teaches Mike. For example, she shows him how to stand up for himself more and be brave. Their relationship, both within it and outside it, truly develops both characters.

Mike Wheeler: “I never gave up on you. I called every night. Every night for -“

It is safe to say they are both happiest when they’re together. We see both Mike and Eleven mourning the loss of each other when apart in Season 2, emphasizing the strong connection they have made.

What is intriguing about Eleven’s character development throughout Stranger Things is her purpose and motivation. Her initial purpose of escaping Papa and the laboratory soon shifts to helping the boys find Will Byers.

Throughout the series we see Eleven understand and get to know her powers for the better. With each season, she gets stronger and tackles more dangers.

These experiences add to her motivation to keep everyone safe, emphasising that her purpose has helped shape her personality. It is clear Eleven would do anything for the people she loves. And this is in part so much to do with that absence of love in her inception.

Eleven from Stranger Things is a character that is searching for a purpose. She arrives somewhat disorientated and goes on a journey to discover the extent of her powers and how she can best use them.

This is in part why she is such a rewarding character. We are along with her for her journey of self-discovery, learning as much about her throughout as she learns about herself.

The Character Arc of Eleven from Stranger Things

Eleven goes through numerous challenges within Stranger Things which evidently shape and impact her character. One example that stands out is when she is being kept hidden from the outside world by Hopper due to his concerns for her safety.

Eleven’s character arc develops through her learning more about the world, herself and developing her own relationships. The challenges which inevitably follow her and the group make her a dynamic character as she’s always at the center of the action.

Eleven’s character arc is arguably the most substantial of the series. Whilst she’s not the only character to go through serious emotional turbulence, she’s the one who we see the biggest and most discernible change in.

This is what makes a meaty character arc: change and growth. Whilst all the characters within the series experience it, Eleven’s otherworldly nature means her growth has to be the most significant.

In Conclusion: What Makes Eleven From Stranger Things an Original Character?

What makes Eleven from Stranger Things such an original character?

Her supernatural gifts make her a beguiling presence. But it’s the way in which she uses these gifts that make her compelling and original. She holds onto them until the moments in the series that have the highest stakes. But furthermore, Eleven also weaponizes her powers to subvert traditional trappings of the coming of age genre.

In this, Eleven is an encapsulation of the series. She’s a unique character in a familiar context. Eleven represents the element of Stranger Things that makes it so compelling, a fantastical twist on a relatable, well-tread setting.

Want to have a go at creating great characters like Eleven from Stranger Things? Check out our Ultimate Guide to Writing Characters That Fascinate.

This article was written by Georgie Watts and edited by IS staff.