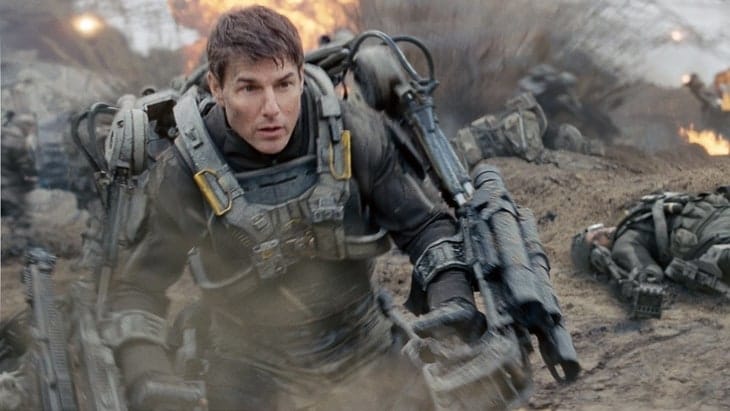 Time loop movies have been popular since their classic, most famous origin, Groundhog Day. This style has risen in popularity particularly within the last decade due to the inventive depictions and increasingly clever escapes and excitement within the time loop monotony.

When every day feels the same, how do we make them count? The best time loop movies, such as Groundhog Day, Edge of Tomorrow, and Palm Springs, all highlight the human frustration of feeling stuck. They challenge us to consider the meaning of life and our place within it.

Built on the foundation of characters who find themselves trapped in a time loop, repeating the same day over and over, time loop movies present a complicated challenge: how do you make repetition unique?

The Key Elements of a Time Loop Movie:

Time loop movies depend on their characters. When each day is the same, the development of the film comes from the changing of the characters. Let’s look at some examples.

Groundhog Day is the blueprint for time loop movies and its protagonist contributes greatly to the film’s persevering success.

Connors’s character does grow as he relives the same day. He stops indulging in one night stands, copious amounts of food, crime, and manipulation granted by the knowledge he gains from living the day so many times.

His improvement keeps viewers hooked; they, of course, want to see him break the time loop. But more importantly, they want to see him become someone different by the end of the loop. What would be the lesson of reliving the same day if Connors solved the loop and did not change?

Give your characters space to improve, and do so by assigning specific flaws to your characters. Connors’s flaws aren’t automatically there; they had to be chosen by the screenwriters. Select the ways in which your character will be flawed.

It is also important to decide on the balance between watching the main character grow and keeping the viewer entertained. The character cannot take too long to change. The audience has to sense this change is happening throughout, no matter how gradual it might feel.

William Cage in Edge of Tomorrow

In Edge of Tomorrow, Major William Cage, played by Tom Cruise, is inexperienced in combat and lives life prioritizing his own well being. He is at his core a self-preservationist.

This mindset is challenged as Cage enters the time loop. He is the only one with a shot at saving humanity from its demise and must become someone mentally and physically strong enough to kill the invasive alien race.

This setup allows for Cage’s character to grow. Despite the movie focusing on the same day, each day feels different because Cage is different. His improving combat skills, his developing relationship with Rita, and his growing understanding of the alien race and the problem at hand allow for each looped day to feel like a new one.

Nyles and Sarah in Palm Springs

Both protagonists in Palm Springs have unresolved issues at the beginning of the film.

Throughout the film, Sarah is ridden with guilt over having an affair with her sister’s husband-to-be. Though overcoming this remorse is not the key to escaping the time loop, it is necessary for Sarah’s character to come to terms with her actions in order to find the determination and a way out of the loop.

Nyles and Sarah are good examples of writing flawed characters that viewers continue to care about and stay invested in. Their growing relationship, their confrontation with each of their personal problems, and their ultimate growth by the end of the movie hooks viewers and makes them engaged with the story.

Make your characters imperfect. Make them weak, ignorant, or selfish, and then use the time loop to give them the time and the means to improve. Not only will this grant you an intricate, compelling character, but it also will capture viewers’ attention and keep them invested in the story in a fundamental way.

2. Create a Clever Setting for the Loop

While the characters primarily carry time loop movies, the plot and conflict still drive the story. The day that is being looped needs to be open enough to allow the characters to do many different things within the confines of the story. So the setting is vital in this regard.

Palm Springs has the perfect balance of possibility and structure.

The breakup between morning and evening allows for the movie to have a break from repetition. The wedding is ample opportunity for lots of character interaction. It’s used in comedic ways, such as Nyles trying to steal the bride away during the first dance. Or it’s used in emotional ways, such as Sarah giving a profound toast.

The wedding setting also allows for characters such as Roy to enter the story. Roy’s vengeful pursuit of Nyles, a result of Nyles getting him stuck in the time loop as well, adds suspense and danger to what is otherwise a benign story.

In Edge of Tomorrow

Edge of Tomorrow uses geography to drive the plot forward.

This physical progress not only allows the days within the loop to differ but also creates stakes.

Ultimately, you need to use your setting as a tool. A good backdrop will act as a catalyst for the story, and should give you opportunities to explore different experiences within the same day of a time loop.

A crucial part of good time loop movies is a satisfying solution. How do the characters break the time loop?

Each movie approaches this in a different way.

What Do Each of These Movies Do Right?

Each loop is unique and makes sense within the context of the movie. The end of the loop in Groundhog Day depends on Connors’ happiness because that is the crux of the film. It wouldn’t make sense for anything else to be the solution to his problem.

The Edge of Tomorrow time loop is connected with the alien’s biology.

While the time loop in Palm Springs is solved by using quantum physics, it is ultimately driven by Sarah’s resolve.

In conclusion, the solution to breaking the time loop should be unique and specific to the characters, story and setting. Don’t manufacture a time loop break based on previous time loop movies. Instead, connect to the core distinctiveness of your story.

One of the crucial don’ts of time loop movies is unoriginality. If you choose to copy an existing time loop movie, the audience will know; you will be repeating repetition.

Paying homage to a classic or referencing other time loop movies is acceptable. But being original with your ideas is critical with this particular style of movie. Make sure the origin of your story is not the desire to create a time loop movie but that instead, you are using the time loop device to enhance your story.

Many time loop movies include a sequence in which the characters make every decision right and don’t miss a step. For example, they save a person from walking into the street just in time or catch something that normally would have hit them in the head.

This perfection is briefly interesting, as viewers get to watch the characters use the knowledge and reflex gained from experience to perfectly execute the day. The reality is that most viewers would love to experience that feeling, the moment where they can have that much control and make the right decision with no doubt.

Don’t use this satisfaction of confidence as a crutch, though. There is a line that if you cross it will produce an effect in which the audience is bored. While it is satisfying to watch characters exert full control over their situation, it isn’t interesting to watch repeated success; viewers want to see characters struggle and then triumph.

DON’T Rely on the Stereotypes

There are also a few clichés and tropes to avoid when writing your script for a time loop movie:

Minimize or utilize the main characters’ bewilderment about the time loop.

Death and suicide are commonly used in time loop movies since the characters no longer have the consequence of staying dead.

Finally, don’t shy away from the metaphysical, the astrophysical, the geophysical. Time loop movies, although often comedic, touch on serious and complicated themes.

All three movies touch on one’s existence in the universe; how do we interact with the world? How does human interaction shape us, and what does it mean to have those interactions erased every day? Don’t be afraid to explore these big concepts in your script.

Writing time loop movies requires significant creativity. With the structure of the story being focused on repetition, you must make your characters and what they do unique and engaging.

Your main character should not have life all figured out. A protagonist who is perfect at the beginning of a movie would have little growing to do in a time loop. A flawed character, however, is confronted with their imperfections and desires when taken out of their day-to-day life.

Furthermore, choosing the right setting for the time loop is crucial. This day, the surroundings and its people will be on screen over and over again. Make sure it is something viewers are willing to watch repeatedly, and something that you as a screenwriter can utilize to create many engaging scenes.

Finally, make your solution stand out. With time loop movies rising in popularity for both audiences and screenwriters, it is key that your time loop differs from the others. What makes your movie, your time loop, worth watching?

What is a Time Loop Movie?

A time loop is a plot device where characters continually experience the same span of time, which is repeated until they eventually can find a way to break out of it.

How Do You Write a Time Loop Movie?

The three most important elements of writing a time loop movie are creating a compelling, believable protagonist, constructing a rich setting and finding a rewarding escape from the loop.

What to Avoid in Writing a Time Loop Movie?

Avoid stereotypes and embrace originality by making the time loop device crucial to your story and its themes. Don’t shy away from getting to grips with big ideas and lean into the complexity that time loop movies can ignite.

This article was written by Reese Collins and edited by IS staff.

2 thoughts on “The Best Time Loop Movies: How Do You Make Repetition Unique?”