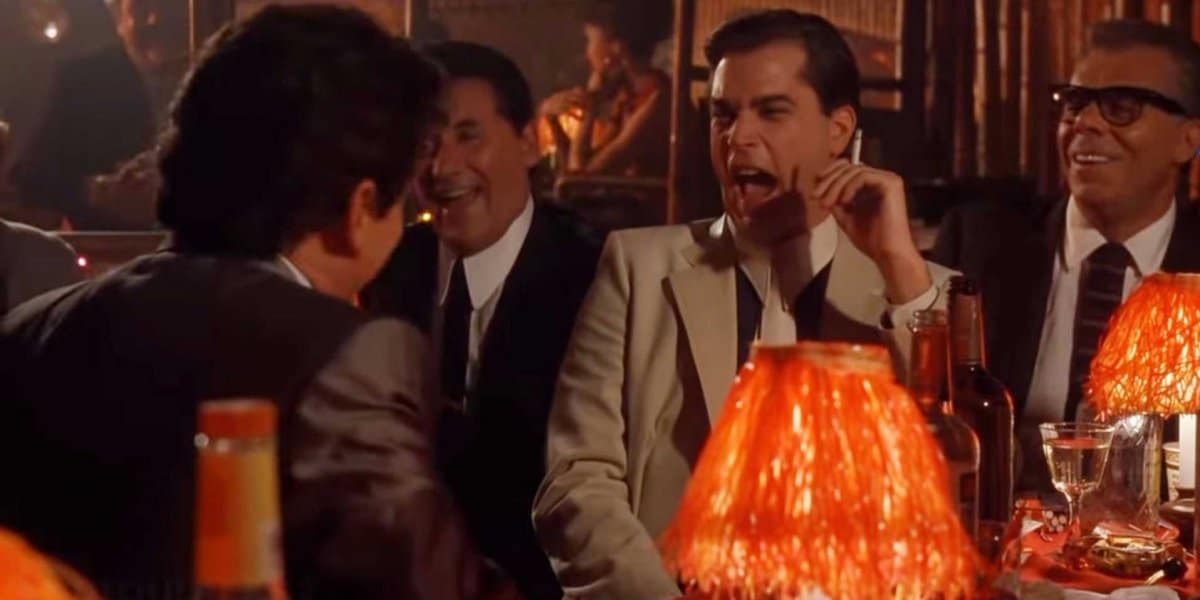 It sounds like a dull writing exercise. Put your characters in a room and see what happens, arguing or laughing. But here are 10 great, cinematic scenes that prove being stuck in one room doesn’t have to mean being stuck in a boring scene.

The tone of this scene turns on a dime. Tommy is telling a story and everyone is laughing. Suddenly Tommy sours at a seemingly innocuous remark and the scene turns deadly serious.

Even though Tommy says he’s only joking, the audience can never see him the same way again. Tommy is unpredictable and quick to violence, as demonstrated when he smashes a glass on another man’s face towards the end of the scene.

It’s hard to tell what’s more unsettling, the act itself or the way everyone laughs as if it were just another one of his jokes.

This is a great example of how Martin Scorsese (who also co-wrote the screenplay with Nicolas Pileggi, from Pileggi’s book) uses comedy to both relieve and build tension.

Really, the whole film qualifies for this list. It plays out in real time as a jury deliberates over a murder case where, if a guilty verdict is returned, will result in a death sentence for the accused.

Despite being set in a single room, it’s a cinematic and thrilling film.

By this late stage in the story, there is only one juror, number 3, who remains unconvinced that they should vote not guilty.

Juror 8, who’s gradually convinced the others to vote not guilty, patiently listens to 3’s objections.

This scene is so powerful because of the clear power dynamic at play. 8, already soft-spoken, has very little to say at this point. There are no new arguments or pieces evidence he can introduce to make his case.

Instead, his silence and the accusatory silence of the other jurors speaks volumes. He knows he’s on the side of justice.

3 stands up and goes to the window, effectively cornering himself. He breaks down unprompted, revealing the backstory, the root cause, behind his prejudices.

As well as the actual verdict, this is the victory 8 wins, to bring 3 to real self-knowledge. 3 is the antagonist but through arguing he’s persuaded to defeat himself.

In their apartment, eating a meal.

Sebastian suggests that Mia come to Boise where he’s performing. When she shoots this down, he’s hurt even though he was joking in the first place.

Both have their creative pursuits and both are trying to support each other the best they know how. And yet what one wants in terms of support is not what’s best for the other to hear.

Writer-director Damian Chazelle uses this one small line of dialogue to divert the course of the entire scene. It’s no longer simply a romantic meal but a full-blown argument about how they’re following and not following their dreams.

All the hidden bitterness of their relationship, and how far apart they’ve drifted, comes out in this moment, causing irreparable damage. (Sebastian is even playing jazz as background music, something he earlier claimed to hate).

In a film that often takes place in a heightened, fantastical musical world, this scene gets to the real emotional heart of the story and the central relationship.

In the Darkos’ dining room.

In a short space of screenvtime, a family evening meal reveals several complex layers of tension in the Darko household.

First up, there’s the political, economic, and generational divide between Elizabeth and her father.

Then there’s the gender divide, Elizabeth pointing out the sexism of “your husband’s paycheck.” Her mother, perhaps unexpectedly, gives a little cheer when she points this out.

There’s a sibling rivalry between Donnie and Elizabeth. However, Donnie makes clear, this doesn’t mean he sides with their parents either.

Instead, he throws back the fact that he’s in expensive therapy in their face. Donnie is not normal, this scene is saying. His problems are not on the domestic scale of other people’s problems. And he has no allies.

Backstage before Jobs launches the Apple Macintosh 128K in 1984.

Jobs’ ex-girlfriend visits him. She complains about how inadequately he’s been supporting her and the girl she claims (but he denies) is his daughter.

Aaron Sorkin‘s dialogue crackles and Danny Boyle‘s camera is as dynamic as usual, but importantly here neither ever let characters off the hook for their many failings that come up in their arguing.

Jobs is destined for greatness professionally but proves very difficult in his personal life. Chrisann isn’t portrayed as a shrew or money-grabber, as Jobs himself characterises her later, but a person with real wants, needs, and frustrations. Jobs is wealthy and she had to apply for welfare.

Despite being our protagonist and a genius, in this scene Jobs is heartless, even cruel. Reconciling these two sides of his character (or the impossibility thereof) is the major theme of the film. It’s never more powerful or apparent than in this scene.

The character of Chrisann doesn’t recur in the subsequent two time periods. However, this interaction is so powerful that it colours the father-daughter relationship that’s key to Jobs’ arc.

6. THE EDGE OF SEVENTEEN

The genius of writer-director Kelly Fremon Craig’s film is how she can play to both sides, both generations, at once. The film understands Nadine while recognising that she’s difficult for others to handle.

In this scene, the teen audience can relate to Nadine’s frustration at not being taken seriously. She needs to have someone, an adult, listen to her problems. In her mind the easiest way to do that is to threaten suicide.

At the same time, the audience can see that she is not actually suicidal. (Otherwise Mr. Bruner’s casual reaction would read very differently!) Older audience members, who might feel slightly disconnected with her at this point, can relate to Bruner’s frustration.

When Nadine continues to spar with Bruner, holding her own, in a way she wins the audience’s respect back. Bruner respects her intelligence to the point where their relationship is more that between equals than teacher-student.

Albert is upset at himself, his lack of progress with his stutter, his position in his family, and his standing with the public.

The relationship between him and Logue has not been entirely smooth. Yet it’s through this that a remarkable (and hilarious) breakthrough is made.

Albert’s status doesn’t matter here. Much to Albert’s annoyance prior, Logue calls him by his nickname “Bertie,” normally only used by his family.

Albert needs to lose his stutter so he can give speeches in his official capacity. Yet it’s only here, outside of the constricting world of duty and royalty, that Albert is comfortable enough to try the stranger techniques that actually help him.

This scene, arguing turned into a joyful tear of stutter-free swears, is a microcosm of the film’s themes.

A mining facility on the moon.

The scene begins with the two Sam Bells arguing over a model, but it quickly escalates to threats of violence and then a fight.

Their arguing isn’t really over the model. It’s just a breaking point for the pair, who have unexpectedly found themselves cohabiting what should be a solo lifestyle, and with a clone of themselves.

The disagreement about the model is symbolic of their disagreement over who owns the living space of the facility and therefore who is the “real” Sam Bell. When one flips over and destroys the model, it indicates that only one of them can stay alive.

With the model destroyed, which one is “real” and which is “fake”? Can there even be a meaningful distinction between the two?

In the Mitchell house, in Hawaii.

Matt has discovered that his wife, comatose after a boating accident, was having an affair. He presses his friends for details.

Grief makes people act in strange ways, and this film is an exploration of that.

Matt experiences a full range of emotions in this one scene. There’s definite anger at his wife, and at his wife’s friends and his friends, which expresses itself in extreme callousness and arguing (“lipstick on a corpse”).

Then there’s a measure of regret and even tenderness. Among all this, he still wants and needs to know if she loved the other man.

The roles flip so quickly, and yet it’s sold well in the dialogue and the performances. Matt thought Kai’s attempts to stick up for Elizabeth, his wife, were pointless. Now Kai finds his question of love irrelevant after she now knows that Elizabeth is going to die.

Each character wants something, some semblance of emotional assurance, from the other. However, this is something neither are equipped to provide.

Billy Costigan Jr. (Leonardo DiCaprio), in the mob as a double agent for the police, and Dr. Madolyn Madden (Vera Farmiga), a psychiatrist.

The pressure of maintaining his undercover identity has become too much for Billy. His frustrations come flowing out in this scene, although they’re couched in a Bostonian irony.

Arguing about getting Valium, Dr. Madden’s ability at her job, and the value of her profession is all cover.

The subtext of this scene, which Billy inadvertently lets out, is that he’s afraid. He may not actually be suicidal, but he’s afraid of being discovered and killed, or worse.

As he implies, his machismo prevents him from being able to fully, sincerely admit this. It’s a great scene because Billy Costigan, as tormented as he is, is so incredibly ill-suited for therapy, a process that relies on him willing to admit his vulnerabilities.

That he’s been directed to talk to Dr. Madden for support is another indicator of how low those in charge value his actual well-being.

Like any great scene, these scenes all have their own mini three act structures. They have a beginning, build to a climax and then resolve in a way that alters the status quo.

While they take place in a single room, some of them empty (THE KING’S SPEECH) or highly familiar and mundane (DONNIE DARKO), the people and their relationships are interesting and they’re all highly cinematic as a result.