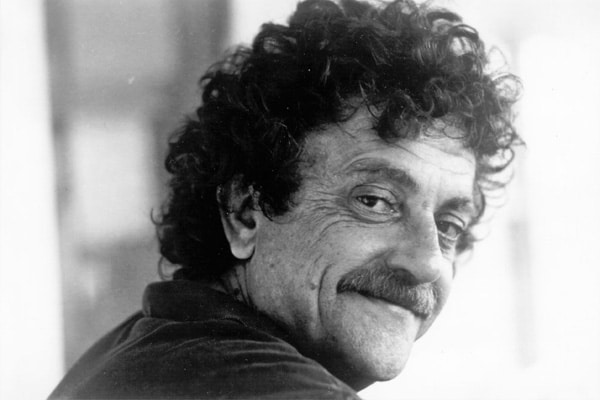 Perhaps this is why Vonnegut has rarely been adapted to film, and even rarely adapted successfully. George Roy Hill directed a SLAUGHTERHOUSE-FIVE film in 1972 from a script by Stephen Geller.

Jerry Garcia of The Grateful Dead bought the rights to The Sirens of Titan in 1983, only later confessing that this was partly to prevent it from being made into a bad film. Leonardo DiCaprio’s Appian Way Productions has been developing Cat’s Cradle for several years.

Still, Kurt Vonnegut’s unique creativity and philosophical viewpoint is very valuable for screenwriters. These lessons for writers, drawn from his fiction and non-fiction, reveal Vonnegut as a sharp observer of human nature and all of its existential absurdities.

Below are 31 lessons from Kurt Vonnegut for writers, filmmakers, and storytellers…

1 “We have to continually be jumping off cliffs and developing our wings on the way down.” ― If This Isn’t Nice, What Is?: Advice for the Young

Writing is an act of courage. It can feel like jumping off a cliff, but that’s when your survival mechanism kicks in.

2 “The arts are not a way to make a living. They are a very human way of making life more bearable. Practising an art, no matter how well or badly, is a way to make your soul grow, for heaven’s sake. Sing in the shower. Dance to the radio. Tell stories. Write a poem to a friend, even a lousy poem. Do it as well as you possible can. You will get an enormous reward. You will have created something.” ― A Man Without a Country

A sobering thought, but one that’s sadly often necessary. So many writers will never make a living from their writing. The key is to find a way to still feel creatively fulfilled.

3 “Of all the words of mice and men, the saddest are, “It might have been.”

Seize opportunities where- and when-ever they arise. Make the most of every moment, whether that’s researching, outlining, writing, or networking. On the other hand, if you don’t make your target for today, this week, month, or even year, wallowing in regret serves no purpose. Learn to move on.

4 “When I write, I feel like an armless, legless man with a crayon in his mouth.”

It’s reassuring to realise that even a great writer like Vonnegut feels daunted by the blank page!

It’s often impossible to narrow the source of an idea down to a single thing which is why Kurt Vonnegut and so many writers find this question frustrating. Writers have to be open to the world as inspiration can strike from anywhere and everywhere.

6 “I say in speeches that a plausible mission of artists is to make people appreciate being alive at least a little bit. I am then asked if I know of any artists who pulled that off. I reply, ‘The Beatles did’.” ― Timequake

Kurt Vonnegut knew the value of popular art, as his cameo in the 1986 Rodney Dangerfield vehicle Back to School demonstrates. Don’t turn up your nose at popular books, music, TV shows and movies. If these are what help people appreciate their lives, there’s tremendous value in that.

7 “Do you realize that all great literature is all about what a bummer it is to be a human being? Isn’t it such a relief to have somebody say that?” ― A Man Without a Country

At the same time, stories don’t always have to be upbeat to be popular. Stories also allow us to commiserate and to realise that we are not alone in our problems.

8 “Who is more to be pitied, a writer bound and gagged by policemen or one living in perfect freedom who has nothing more to say?”

9 “Another flaw in the human character is that everybody wants to build and nobody wants to do maintenance.” ― Hocus Pocus

How often have you heard that “writing is rewriting”? It’s the commitment to making a script the best it can be that will help you stand out as a writer.

10 “Every character should want something, even if it is only a glass of water.”
― Bagombo Snuff Box

Actors ask “What’s my motivation?” for good reason. Wanting something, even if it’s a basic survival need, is a fundamental character trait.

11 “Write to please just one person. If you open a window and make love to the world, so to speak, your story will get pneumonia.” ― Bagombo Snuff Box

12 “There is no reason why good cannot triumph as often as evil. The triumph of anything is a matter of organisation. If there are such things as angels, I hope that they are organised along the lines of the Mafia.” ― The Sirens of Titan

It can be tempting to write a depressing, downbeat ending, as if that’s more realistic. However, this is not necessarily the case.

Kurt Vonnegut on the Shapes of Stories

13 “profanity and obscenity entitle people who don’t want unpleasant information to close their ears and eyes to you.” ― Hocus Pocus

Sometimes it’s difficult to reach beyond an audience that already agrees with you. Writers can smuggle their ideas in innocent packages (ZOOTOPIA, for example).

14 “Somebody gets into trouble, then gets out of it again. People love that story. They never get tired of it.”

Are there really only seven types of story? Or just one? Storytelling is as old as civilisation itself. You can learn a great deal from storytelling theory through the ages, from Aristotle’s Poetics to Joseph Campbell.

15 “No art is possible without a dance with death.”

16 “I think that novels that leave out technology misrepresent life as badly as Victorians misrepresented life by leaving out sex.”

17 “I believe that reading and writing are the most nourishing forms of meditation anyone has so far found. By reading the writings of the most interesting minds in history, we meditate with our own minds and theirs as well. This to me is a miracle.” ― Palm Sunday: An Autobiographical Collage

18 “Talent is extremely common. What is rare is the willingness to endure the life of the writer.”

Kurt Vonnegut on how to write a short story

19 ““simply moderate giftedness has been made worthless by the printing press and radio and television and satellites and all that. A moderately gifted person who would have been a community treasure a thousand years ago has to give up, has to go into some other line of work, since modern communications put him or her into daily competition with nothing but world’s champions…” ― Bluebeard

20 “I think it can be tremendously refreshing if a creator of literature has something on his mind other than the history of literature so far. Literature should not disappear up its own asshole, so to speak.” ― Palm Sunday: An Autobiographical Collage

The same could very well be said about films and screenwriters. Having a real life to draw from is essential!

21 “Maturity, the way I understand it, is knowing what your limitations are.” ― Cat’s Cradle

22 “Don’t put one foot in your job and the other in your dream, Ed. Go ahead and quit, or resign yourself to this life. It’s just too much of a temptation for fate to split you right up the middle before you’ve made up your mind which way to go.” ― Player Piano

23 “Be a sadist. No matter how sweet and innocent your leading characters, make awful things happen to them — in order that the reader may see what they are made of.” ― Bagombo Snuff Box

24 “I’m simply interested in what is going to happen next. I don’t think I can control my life or my writing. Every other writer I know feels he is steering himself, and I don’t have that feeling. I don’t have that sort of control. I’m simply becoming. I’m startled that I became a writer.” 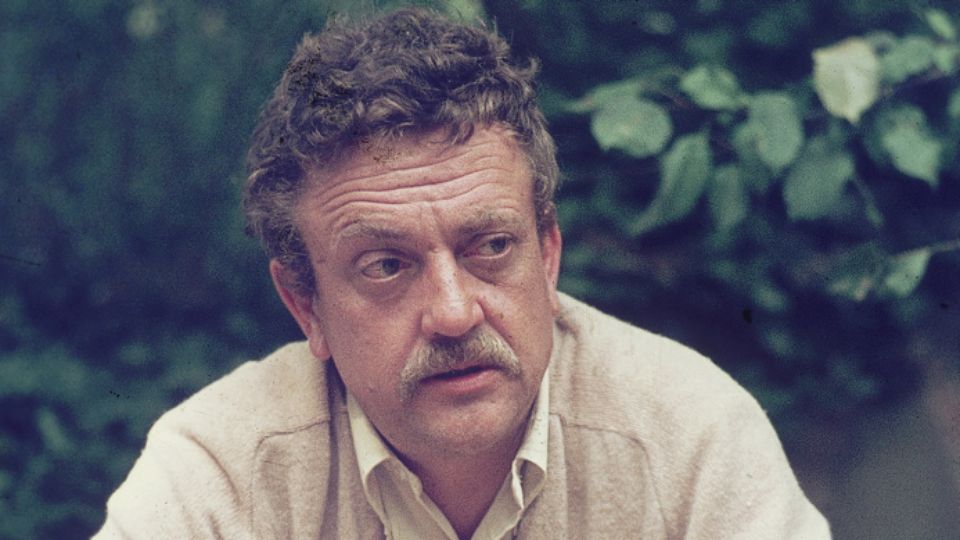 25 “If a person survives an ordinary span of sixty years or more, there is every chance that his or her life as a shapely story has ended and all that remains to be experienced is epilogue. Life is not over, but the story is.”
― Deadeye Dick

26 “It shook up Trout to realise that even he could bring evil into the world — in the form of bad ideas.” ― Breakfast of Champions

(Kurt Vonnegut often used the recurring character of Kilgore Trout, writer of cheap sci-fi novels, as a stand-in for himself.)

27 “I consider anybody a twerp who hasn’t read the greatest American short story, which is ‘Occurrence at Owl Creek Bridge,’ by Ambrose Bierce.”

28 “We are here on Earth to fart around. Don’t let anybody tell you any different.”

29 “If you can’t write clearly, you probably don’t think nearly as well as you think you do.”

30 “Paul Slazinger says, incidentally, that the human condition can be summed up in just one word, and this is the word: Embarrassment.” ― Bluebeard

31 “I am simply impressed by the unexpected insights which shower down on me when my job is to imagine, as contrasted with the woodenly familiar ideas which clutter my desk when my job is to tell the truth.” ― Wampeters, Foma and Granfalloons