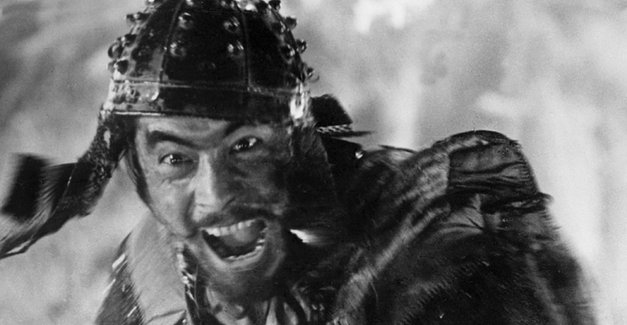 Probably most famous for his epic, THE SEVEN SAMURAI, Akira Kurosawa was often seen as more popular in the West than in his native Japan.

His big breakthrough came with RASHOMON, the film that introduced Western filmmakers to Japanese cinema and spawned an army of imitators and countless remakes.

Following a lean spell in the 1970s Akira Kurosawa returned to filmmaking, reaching his peak with the multiple award winning RAN in 1985, an epic adaptation of Shakespeare’s King Lear.

“Most directors have one masterpiece by which they are known. Akira Kurosawa has at least eight or nine.” – Francis Ford Coppola

1. “In order to write scripts, you must first study the great novels and dramas of the world. You must consider why they are great. Where does the emotion come from that you feel as you read them? What degree of passion did the author have to have, what level of meticulousness did he have to command, in order to portray the characters and events as he did? You must read thoroughly, to the point where you can grasp all these things. You must also see the great films. You must read the great screenplays and study the film theories of the great directors. If your goal is to become a film director, you must master screenwriting.”

3. “Human beings share the same common problems. A film can only be understood if it depicts these properly.”

4. “I‘ve forgotten who it was that said creation is memory. My own experiences and the various things I have read remain in my memory and become the basis upon which I create something new. I couldn’t do it out of nothing. For this reason, since the time I was a young man I have always kept a notebook handy when I read a book. I write down my reactions and what particularly moves me. I have stacks and stacks of these college notebooks, and when I go off to write a script, these are what I read. Somewhere they always provide me with a point of breakthrough. Even for single lines of dialogue I have taken hints from these notebooks. So what I want to say is, don’t read books while lying down in bed.”

5. “Something that you should take particular notice of is the fact that the best scripts have very few explanatory passages. Adding explanation to the descriptive passages of a screenplay is the most dangerous trap you can fall into. It’s easy to explain the psychological state of a character at a particular moment, but it’s very difficult to describe it through the delicate nuances of action and dialogue. Yet it is not impossible. A great deal about this can be learned from the study of the great plays, and I believe the ‘hard-boiled’ detective novels can also be very instructive.”

7. “The role of a director encompasses the coaching of the actors, the cinematography, the sound recording, the art direction, the music, the editing and the dubbing and sound-mixing. Although these can be thought of as separate occupations, I do not regard them as independent. I see them all melting together under the heading of direction.”

8. “When I start on a film I always have a number of ideas about my project. Then one of them begins to germinate, to sprout, and it is this, which I take and work with. My films come from my need to say a particular thing at a particular time. The beginning of any film for me is this need to express something. It is to make it nurture and grow that I write my script- it is directing it that makes my tree blossom and bear fruit.”

9. “A film director has to convince a great number of people to follow him and work with him. I often say, although I am certainly not a militarist, that if you compare the production unit to an army, the script is the battle flag and the director is the commander of the front line. From the moment production begins to the moment it ends, there is no telling what will happen. The director must be able to respond to any situation, and he must have the leadership ability to make the whole unit go along with his responses.”

10. “Movie directors, or should I say people who create things, are very greedy and they can never be satisfied… That’s why they can keep on working. I’ve been able to work for so long because I think next time, I’ll make something good.”