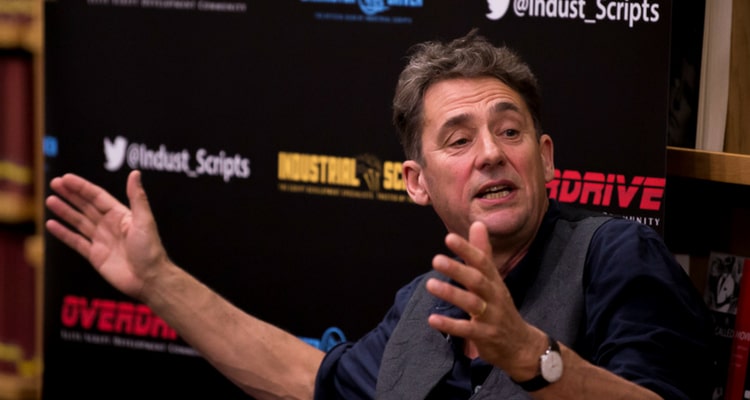 This Q & A was compered by producer, James Cotton.

Tim Bevan where do we start? Co founder, co chairman of Working Title Films since 1984 as the trailer said.  Over 100 films, all those awards, I won’t start naming them – where to start. Well usually we start with the first film the guest saw and run  chronologically but tonight I’m having to look at things slightly differently just to cram everything you’ve done into one hour.

To start, the structure of Working Title, it hasn’t changed much.

It hasn’t changed, Yeah, it started as an independent company, I was running it in parallel with Eric through the 80’s right through to 1992 when we started working together, but we both started as runners. I was with a company called Visual Arts, I’m not quite sure what he was doing, and we both started producing music videos in the 80’s.  There was a convergence at that point where music videos were started getting made, that there were little music films that young people could go and make, that the unions in Britain were being smashed up by Margaret Thatcher, which was an advantage to young people who wanted to work in the film industry because it was a very unionised industry at that point so I couldn’t have been a producer for instance without a ticket.

It was also the beginning of Channel 4, and they started their film programme and all the rest of it.  So long story short, in producing music videos, Sarah and I, who I was working with at that point, decided we would get film directors to direct our music videos. We would get a mixture of young directors and film directors and I got a variety, I did a video for Nick Rhodes, I did a video with Stephen Frears,  I did several with Derek Jarman, but the most important one was  with Stephen Frears, because he came along, he made the most dreadful video for us with a band called Heaven 17.

He’d come up through the BBC, he’d made a bunch of films for the BBC, and when Film Four got started, one of the things that they did was that they got writers from all of the theatres all around Britain to write scripts.  One of the screenplays they developed was with a writer called Hanif Kureshi who was writer in residence at the Royal Court and he wrote the script commissioned by David Rose and Karen Bamborough and he delivered it to Stephen who read it and said “Wow, this is pretty amazing.” It was My Beautiful Launderette, the screenplay.

This is a world that I didn’t know anything about and we’d just made this video together and he kind of liked the people  we’d worked with because they were kind of young and anarchic and he said why don’t you think about producing this?  And I said OK.  I was 24 years old, 25 years old, and he said “we’ve got to go and see the guys at Channel 4”, so we’re walking up Charlotte Street, which is where  Channel 4  is these days, and he said to me “I only make films in February”.

So we went in and we had this meeting with Karen and David, very, very polite people. And they said “How much will it cost?” and I thought I know, its dollars for movies isn’t it , so I said “a million bucks”.  They said when do you want to make it? And it was November, and I said well he only wants to make films in February so we need to get going. And that  was the beginning, that was the first film that we got.

Stephen and Hanif were very involved, all over it creatively and I decided I would try and learn the area of producing which is how the money got spent  and in the producing of it. That is where I got totally involved and I also decided at the end of it that I wasn’t really interested in that area of filmmaking very much as I find it a little bit dull to be quite honest…

If you enjoyed this article, why not check out our Insider Interview with Stuart Hazeldine?

Continued inside The Vault >