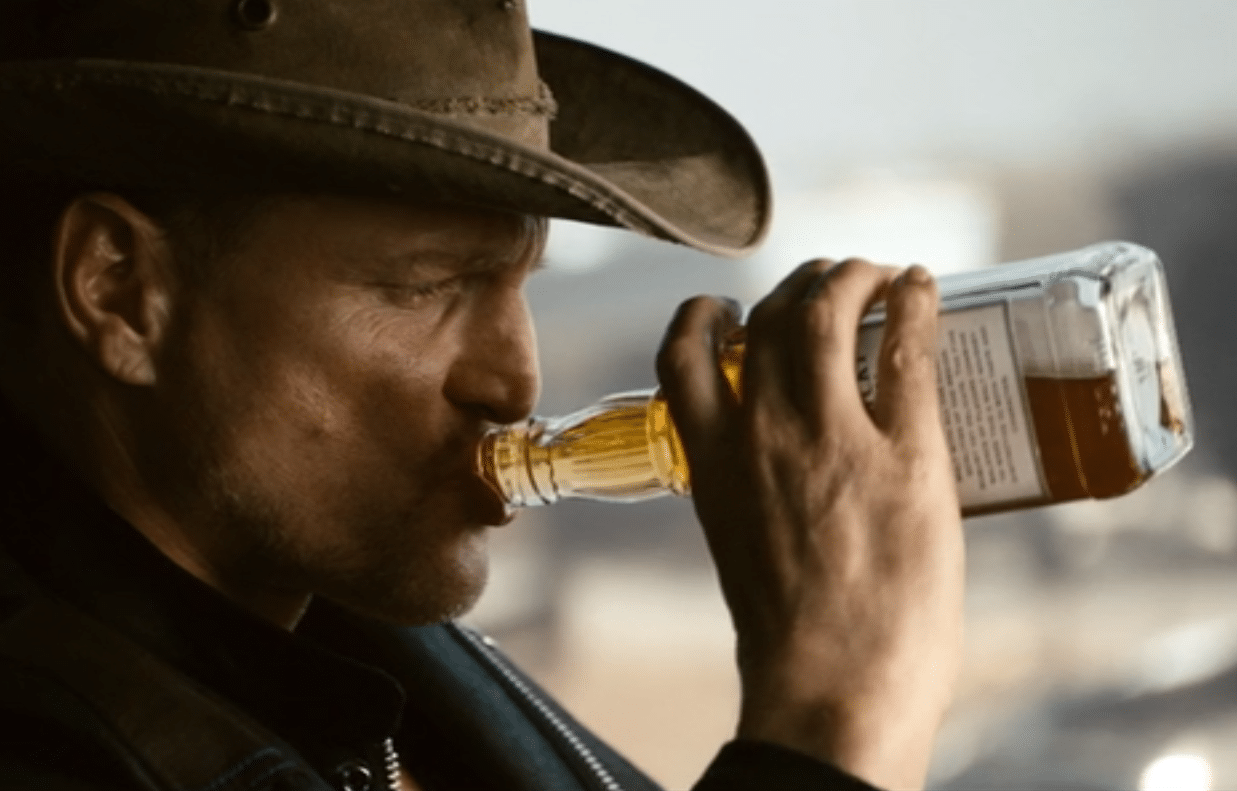 ZOMBIELAND began life as a TV pilot by writing partners Rhett Reese and Paul Wernick (later behind DEADPOOL). Even in its final feature form, it’s a perfect study for how to instantly create a tight group of comedy characters and bounce them off each other.

The inevitable has happened: a zombie apocalypse. When he kills his infected neighbour after meeting her for the first time, shut-in Columbus (Jesse Eisenberg) ventures out to find his parents. On the way he teams up with Tallahassee (Woody Harrelson) and the con artist sisters Wichita (Emma Stone) and Little Rock (Abigail Breslin).

Tallahassee is a loner and a bit of a cowboy. He’s in the ass-kicking business and “business is good.” He enjoys big cars and smashing things but his ultimate goal is to obtain a single, intact Hostess Twinkie®. A small symbol of normalcy in a crazy world.

He tells Columbus that he had a dog Buck that he loved who was killed by zombies. Later in the film it is revealed that Buck was actually his young son.

How is Tallahassee’s character revealed by the action and dialogue?

Walking down a freeway full of crashed and abandoned cars, Columbus sees an SUV barrelling towards him, makeshift plough on the front smashing cars out of the way.

Tallahassee steps out of the car. After a brief stand-off, Columbus asks for a ride and he agrees. Columbus gets in the car. They share a drink and Tallahassee tells him the deal. No names. He’ll take Columbus until he gets on his nerves. Columbus agrees and they drive away.

What do we learn about Tallahassee in these scenes?

Tallahassee’s vehicle and driving style are distinctive. He’s driving a luxury SUV, customised not only with the plough but the number 3 painted on the side. He hits other cars to get them out of his way but also for fun. He’s practical but a little bit playful as well (Rule #32: Enjoy the Little Things).

This is a major part of the film’s appeal. It taps into the comedic side of common wish-fulfilment fantasies: what would I do if I were the last person on Earth?

When he steps out, Tallahassee is revealed like the hero in a Western. Boots first, jacket, sunglasses and hat. While Columbus trembles, already cowering behind a bike with his shotgun, Tallahassee coolly removes his sunglasses and pulls his gun from his holster. Everything about him embodies the confident loner cowboy type, the complete opposite of Columbus’ neurotic former shut-in.

I never worked so long and hard on an outfit in my life. What this guy wears is who he is. You want to get a sense of this guy as soon as you see him.

– an interview with Woody Harrelson

So many classic buddy comedies, in both film and TV, revolve around this kind of pairing of polar opposite characters. Each can play the straight man role and react to the other. Columbus points out the ridiculousness of Tallahassee’s massive knife and gun. Tallahassee tells Columbus “I’m sensing you’re a bit of a bitch.”

While ZOMBIELAND is a comedy, there are still the underlying life or death stakes of any zombie apocalypse. In THE WALKING DEAD, this wordless stand-off would be incredibly serious. It could even result in one of the characters dying or being seriously injured. Here, two jokes quickly relieve the tension. In the middle of the stand-off, Columbus nervously sticks his thumb up in the hitch-hiker’s gesture. 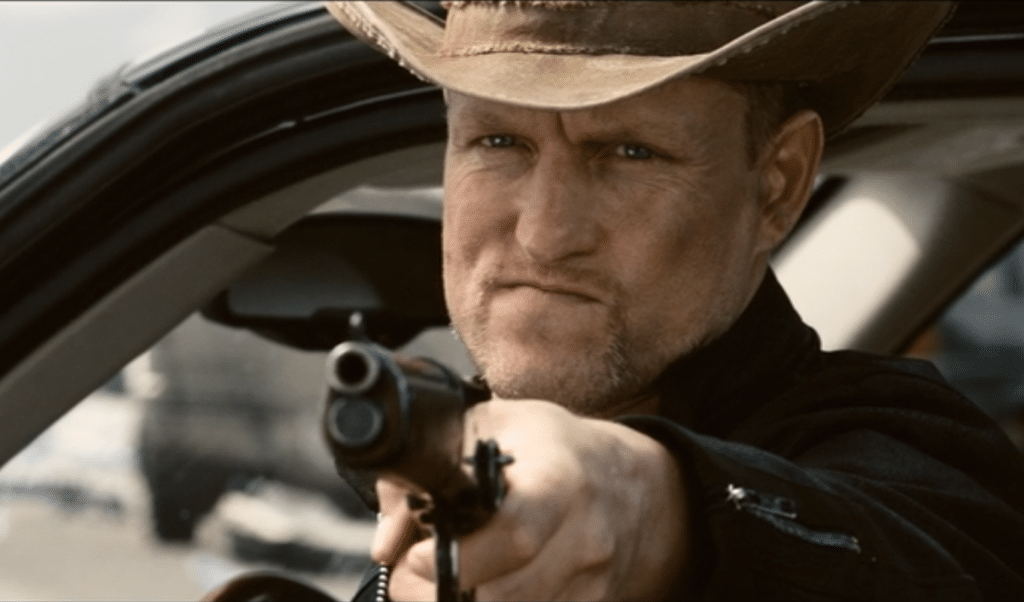 But the audience already know Columbus isn’t going to shoot. He has trouble enough killing zombies, let alone other humans. This is Tallahassee’s first scene, and he’s still an ambiguous character. Before joining him in the car, Tallahassee kicks over the bike Columbus used for cover. If a viewer missed the earlier comic details in his vehicle and costume, here is an indication that Tallahassee is a character that can be laughed at rather than feared. He means no real harm to Columbus.

Their two incompatible worldviews are reinforced by Tallahassee’s response to Columbus checking the backseat (“No-one back there but my duffel bag”) and their shared drink (Columbus tosses his out the window). Columbus has rules and procedures that help him understand and survive the outside world (Rule #31: Check the Back Seat. He even wears his seatbelt. Tallahassee has confidence in himself and his own abilities.

Stop. No names. Keeps us from getting too familiar.

Tallahassee not wanting to learn Columbus’ name is very important. He wants to define the boundaries of their relationship. Just because he offered him a lift doesn’t mean they’ll become friends. In the moment this can be justified practically, as so many dilemmas in zombie films come down to someone unwilling to kill an infected loved one.

However, this also points to Tallahassee’s character flaw. He uses the zombie apocalypse as an excuse to be an emotionally closed-off loner. This as well as the frivolous Twinkie quest (established in the next scene) mask a deeper emotional pain. It’s later revealed that he lost someone once and can’t bear for it to happen again.

I’m not easy to get along with.

This is another strength of buddy comedies. Because they’re opposites forced to team up by their situation, each will challenge the other’s comfort zone and help to bring about each other’s arcs. Tallahassee helps Columbus to learn to relax and enjoy the little things in life. Whatever Tallahassee says, Columbus is an incessant talker and will still try to befriend him.

Each character follows the naming pattern established by Tallahassee in this scene. Columbus and Tallahassee are soon joined by Wichita and Little Rock. Each are seeking a geographic place where they feel they will be able to finally belong (in the sisters’ case, Pacific Playland).

The conflict and the stakes are in the human relationships. Will these characters, especially the loner Tallahassee, stick together or go their respective ways? In the third act, will Tallahassee help Columbus rescue Wichita and Little Rock? Ultimately Columbus persuades him and the others that the ‘place’ where they truly belong is together, in their make-shift family.

I could tell she knew what I was feeling. We all are orphans in Zombieland.

This introduction gives few clues towards Tallahassee’s actual backstory. With the exception of Columbus, the narrator and audience’s viewpoint, this is true of every character. They conceal their pre-zombie apocalypse pasts, their vulnerabilities, until they feel they can trust each other enough.

What this introduction does establish, before Woody Harrelson is even seen on screen, is the personality Tallahassee projects to the outside world. Even choices that might seem very small – choice of car and costume – have great significance in this respect.

Tallahassee makes for a strong contrast with Columbus. These two perfect opposites bouncing off each other create much of the film’s comedy, and this begins immediately. Tallahassee’s insistence on boundaries also hints at a deeper, emotional vulnerability.

His external displays of strength and independence are a front, gradually broken down over the course of the story partly through this relationship with his opposite, Columbus.

If you enjoyed this article, why not check out our article about the GENIUS CHARACTER REVEAL of Jay Cavendish?