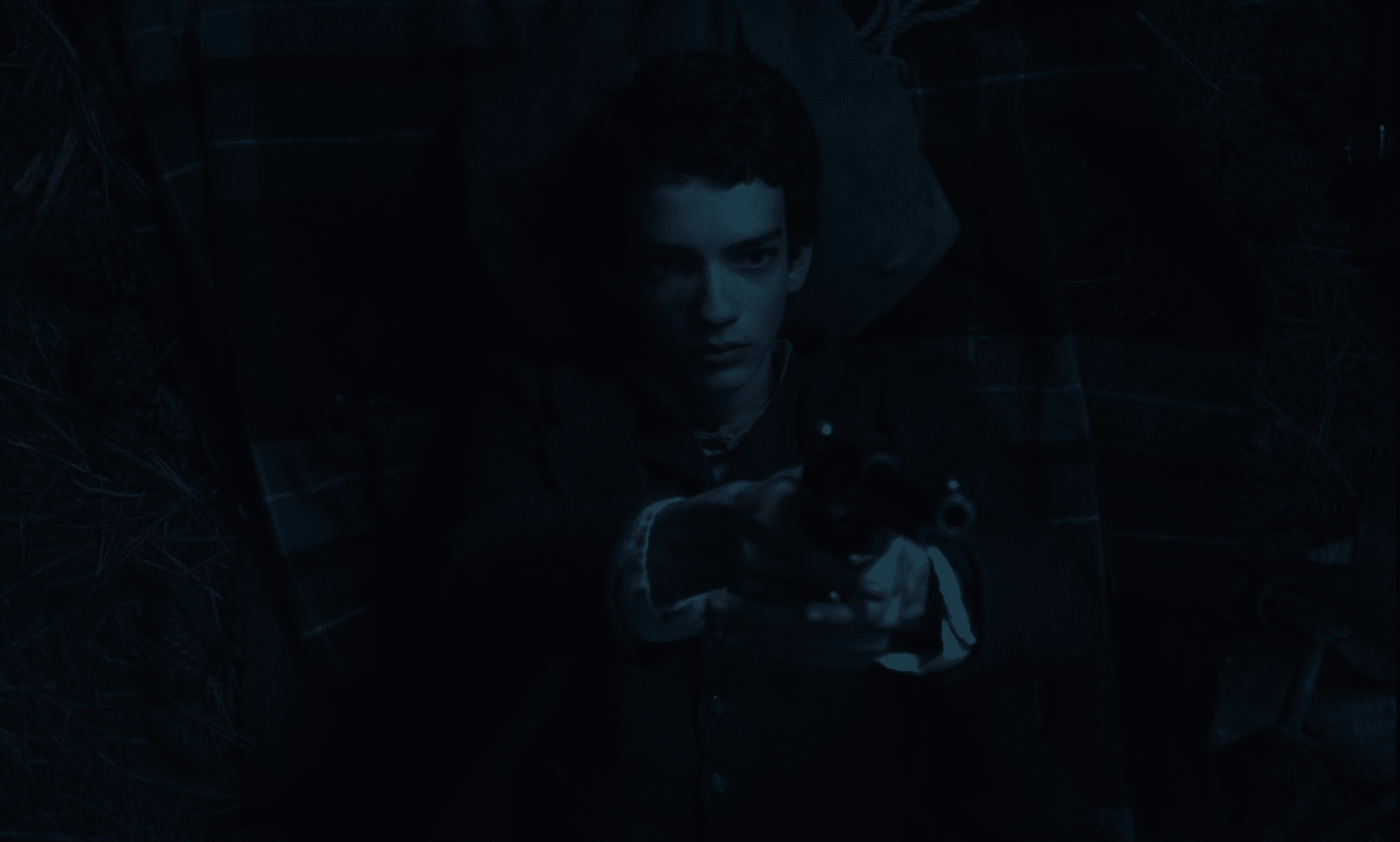 In this series we look at scenes and moments where a film or TV show has revealed a great deal of character information in a compressed period of screen time.

It seems improbable: a Western from a Scottish writer-director, produced and shot in the UK and New Zealand. That is, until you remember some of the greatest of the genre were made by Italians. While a winner at Sundance in 2015, John MacClean’s SLOW WEST flew slightly under the radar. Still, it’s a wonderfully crafted film and worthy of more attention, not least in the deceptively simple way protagonist Jay Cavendish is introduced.

1870, the American West. Jay Cavendish (Kodi Smit-McPhee), having travelled from Scotland, is looking for his love Rose. He employs bounty hunter Silas Selleck (Michael Fassbender) for protection. Silas however soon discovers there’s a bounty on Rose and her father’s heads, and figures to use Jay to lead him straight to them.

Who is Jay Cavendish?

Jay is the protagonist of SLOW WEST, no longer a boy but not quite a man. Son of Lady Cavendish, in the West he has little to his name. Through his journey across the changing landscape and encounters with other characters, the full extent of his past and his naiveté are revealed.

How is Jay Cavendish’s character revealed by the action and dialogue?

A voice-over, in a mixed Irish-American accent, introduces Jay. He is revealed lying on a blanket, fully clothed, looking into the night sky. As he names the star constellations he aims his gun at each one, pretending to shoot.

Jay imagines a woman smiling – Rose, plainly dressed, sitting on a windy Scottish beach. He rolls over and sleeps. The next day, he packs his possessions and rides out, following his compass through the forest and passed some Native American women preparing their dead for burial. The opening titles appear. 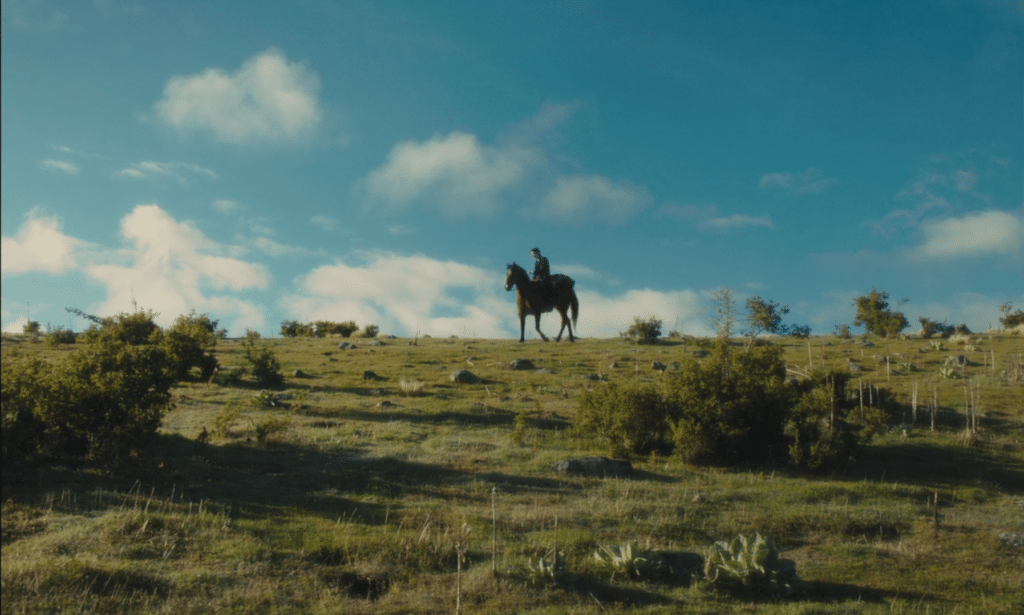 What do we learn about Jay Cavendish in these scenes?

Once upon a time, 1870 to be exact, a sixteen year old kid travelled from the cold shoulder of Scotland, to the baking heart of America to find his love. His name was Jay – her name was Rose.

This voiceover lends SLOW WEST a mythical feel, using the standard “once upon a time” fairy tale opener. However, this is immediately contradicted with the specific date (1870) and likewise, Jay’s grand romantic gesture – crossing an ocean out of love – is undermined by his skinny, youthful appearance in this quiet first scene.

This duality – Western myth colliding with Western reality, simple story-telling with complex truths – not only informs the film’s approach to the genre but also the nature of the conflicts that will arise over Jay’s journey. Each character he meets will, like Jay, have a story to tell to explain themselves, even when this defies what should be plainly visible in front of them.

That Jay knows the names of the constellations indicates his background as more intellectual than practical. This knowledge won’t be useful in the “baking heart of America” in which he now finds himself. At the same time, these names themselves originate in mythology, stories of the kind of epic love he wishes to express.

Jay having such a nightly ritual suggests that at this point he is deep into his journey, a journey he has made so far alone. Jay Cavendish is on the cusp of adulthood, and in this romantic quest he’s playing at what it means to be a man in the West. While he carries what is presumably a real gun, he uses it like a toy. 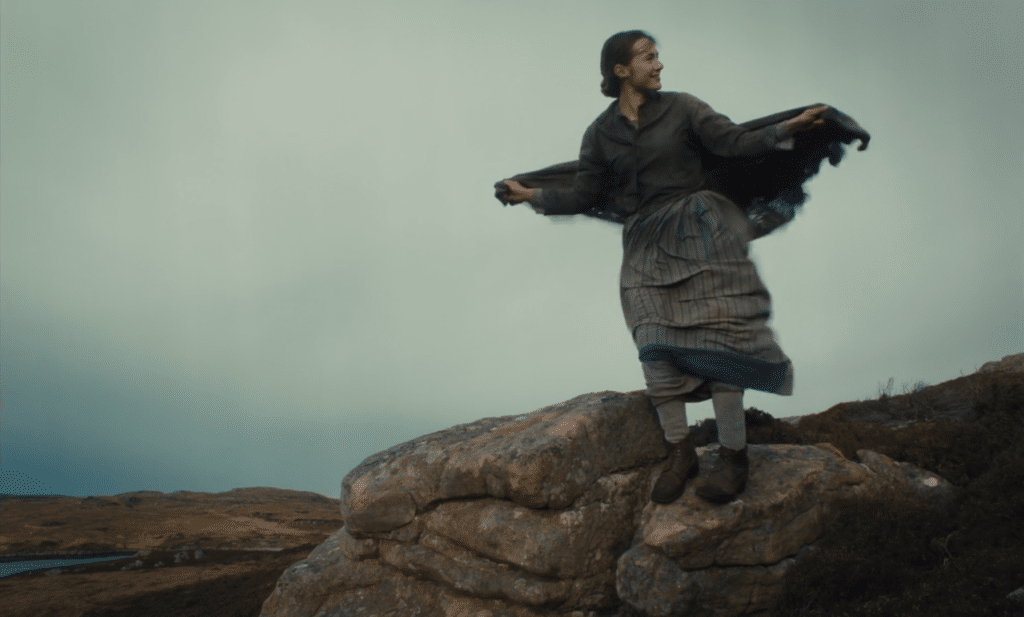 At the same time, despite the different, older voice in the opening VO, the film is guiding the audience to see things from Jay’s perspective. This is crucial for the stakes to have any real meaning. However much of a folly, the audience on some level truly want him to be reunited with his love Rose. The audience want the story Jay and the voiceover tell to be true and neat (a clever use of willing suspension of disbelief).

As well as literally adopting Jay’s point of view for the opening shot, the audience is let in on his imagination. As he shoots each star on Orion’s belt, we see them light up. There are also several very brief subjective flashbacks to Rose in Scotland.

In the morning, Jay’s horse is loaded down with unnecessary luggage, again showing how out-of-place he is here. Jay follows his compass the same way he follows his heart: single-mindedly. While curious, he ignores the brutality of the world around him.

The simplicity of his quest is complicated by another flashback. Rose smiles at someone and dashes down a hill but Jay, off-screen, doesn’t join her. Before we ever meet Rose or hear Jay talk of her, the audience now intuitively understands their relationship, why she’s gone to America and he’s only just now trying to find her.

Jay’s a dreamer, concerned with his cowardice and being a hero when he should be concerned about his survival. It’s unlikely he’ll ever find a place for himself in the West, for where Rose has gone Jay can never follow.

Writer-director John MacLean understands exactly what the audience needs to know about Jay Cavendish for the plot to begin. Beyond his general motivation, there are few specifics about Jay’s backstory. His past is left ambiguous, mysterious, and this is gradually teased out through his team-up with the polar opposite Silas.

More importantly, MacLean also knows how he wants the audience to feel about Jay: a mixture of pity and sympathy. This scene shows how Jay acts when completely alone, the boy who impossibly wants to be a romantic hero. This is Jay’s flaw, and as we can anticipate from the voiceover, it’s one that will soon set him into conflict with other characters and the landscape itself.

If you enjoyed this article, why not check out our article about the GENIUS CHARACTER REVEAL of Tallahassee?