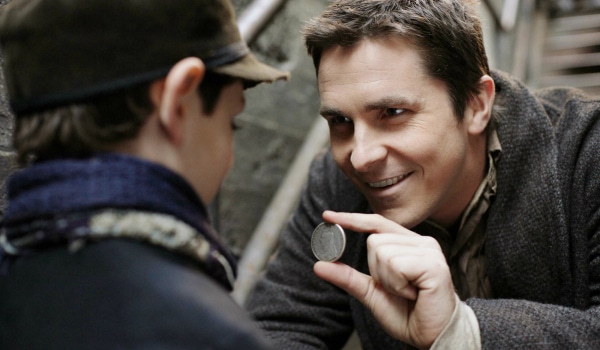 ** SPOILER ALERT: this article reveals key plot points from THE WITCH and THE PRESTIGE **

Holed up alone and away from the world, it can be too easy for screenwriters to forget that films are made for audiences. It’s important to consider what the audience is thinking at each point in the story, about what has happened and what will happen. The screenwriter should be in control of audience expectations, not only creating them but choosing when to meet them or subvert them.

The latter can be difficult. There’s nothing worse as an audience member than feeling cheated or deceived by a film. Especially in a twist, the clues have to be there all along, only the audience can’t figure them out until the proper time. This is where misdirection comes in.

It’s no coincidence that a magician was one of the early pioneers of fiction film-making and special effects (Georges Méliès, depicted in HUGO). Magicians’ routines incorporate plenty of misdirection – beautiful assistants, comedic patter, fast-moving hands. These mislead the audience, distracting their attention away from where and how the actual trick is taking place.

As Cutter (Michael Caine) says in THE PRESTIGE, a film about rival Victorian magicians:

Now you’re looking for the secret. But you won’t find it, because of course, you’re not really looking. You don’t really want to work it out. You want to be fooled.

Audiences want the magic trick to be real. It’s this willing suspension of disbelief that gives misdirection its power and is fundamental to illusions both in magic and film.

In the first scene of THE PRESTIGE, Cutter uses a simple contraption that seemingly transports a bird from one cage to another but instead produces a double and crushes the original. He explains the structure of a magic trick:

This foreshadows Borden’s (Christian Bale) illusion “The Transported Man,” the solution to which Angier (Hugh Jackman) will spend a lifetime obsessing over.

Both of the film’s twists have that sense of an inevitable surprise. Borden has a twin and pretends to be transported across stage. In retrospect, all the clues are there to suggest this. Cutter remarks that Borden must be using a double. Borden’s emotions change significantly from day to day, especially in his marriage.

With clever misdirection, however, the clues never present themselves as such. The audience becomes invested in the drama, accepting Borden’s plausible character motivations for each inconsistency rather than looking for a bigger picture solution.

In Angier’s recreation of the trick, he clones himself each night. One of them must die each time. The Nolans also hide this in plain sight. Tesla (David Bowie) gives Angier a duplication/teleportation device, and this is seen in the opening scene, though the idea of this actually working lies outside the expectations of a historical drama. It isn’t until the visual evidence of the many drowned Angier clones is presented to the audience at the end that it’s clearly taken a turn for the science-fiction.

Its own structure resembling a magic trick, THE PRESTIGE rewards, even demands, repeat viewings to figure out how the whole thing works.

There’s another recent example that also a good job of using misdirection to challenge expectations of genre.

Robert Eggars’ horror film THE WITCH, set in 17th Century New England, begins with a family being banished from their Puritan community. They build a new farm by the edge of an imposing forest. One day, while daughter Thomasin (Anya Taylor-Joy) is watching him, their young baby disappears.

Where did he go? Into the woods. But who took him? Eggars could choose to develop this ambiguity over the course of the story, whether the witch is real or the starving family’s collective delusion. Instead, he answers this question immediately. The next scene shows the eponymous witch and her nefarious need for the baby.

We will conquer this wilderness. It will not consume us.

Conventional wisdom dictates that what’s unseen is far scarier than anything you can put on screen. Imagination is the most powerful special effect. It’s that famous story about the malfunctioning shark in JAWS that led to the creature being hinted at more than shown, or the titular ALIEN who seems to exist only in shadow.

However, the decision to reveal the supernatural horror threat in this way, so early on in the first act, is actually a deliberate piece of misdirection.  Seemingly confirming that the witch is real creates certain expectations for THE WITCH as a more straightforward monster horror film, where this external force will attempt to destroy the rest of the family.

Did ye make some unholy bond with that goat?

But this has in fact put the audience in the same mindset as the family, particularly the stern patriarch William (Ralph Ineson). In their suspicions, stoked by religious paranoia and hungry desperation, they turn on each other. Logically, we understand that there were no actual witches in the witch trials. Thomasin, accused of colluding with the devil, has obviously done no such thing and is innocent when it comes to the baby’s disappearance. However, based on the gruesome scene seen earlier, her parents’ extreme reactions almost seem justified.

Ultimately, the people prove more of an actual threat to each other than the witch or the devil ever did. Their disunity – William taking his wife’s silver cup and letting Thomasin be blamed for it – is what really lets the evil in. At the end of the film, Thomasin chooses to become a witch not because she’s been one all along but because it really is the better option. THE WITCH is less a horror film, at least along the expectations set up in its opening scenes, than an intense historical family drama, or even a twisted coming-of-age story.

The choices of what to show to the audience, how much to show and when to show need to be made carefully, deliberately and confidently. Great screenwriters have the ability to direct and misdirect the audience’s attention so precisely that they won’t even notice when they’ve already been told the ending of the film. Or at least, not until a second viewing.

Misdirection can also be used to create and subvert different genre expectations. THE WITCH begins with a sequence that includes shocking violence, but parlays this into a generally unnerving atmosphere and a transgressive ending. This helped the film stand out with festivals and critics and become a sizeable hit. But it also left some more general horror audiences dissatisfied. Such are the potential benefits and perils of defying expectations.