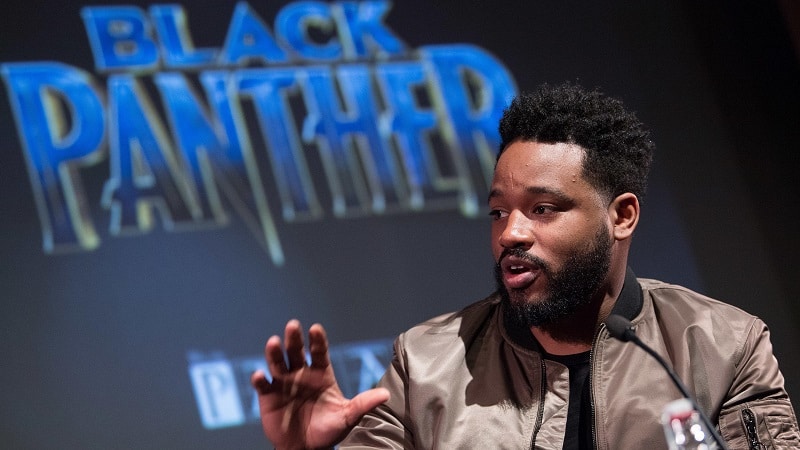 Ryan Coogler’s career path is the envy of many aspiring filmmakers. Off of the success of a festival-acclaimed indie drama, FRUITVALE STATION, he brought his own personal touch to back-to-back blockbuster hits CREED and BLACK PANTHER.

If he has any filmmaking tips to share, it’s probably worth listening.

Coogler grew up in Oakland and Richmond in California. After studying on a football scholarship, Ryan Coogler attended USC Film School (Jon Chu, Judd Apatow, and Rian Johnson are notable other alumni).

After several successful short films, Coogler made his feature debut with FRUITVALE STATION, based on the story of Oscar Grant, a man who was killed by a police officer in Oakland. It won Best First Feature in Un Certain Regard at Cannes and proved popular with audiences and critics.

The Rocky franchise had been completely dormant since 2006’s ROCKY BALBOA, written and directed by franchise star Sylvester Stallone. Ryan Coogler’s next film, CREED was a breath of fresh air, bringing Coogler’s star from FRUITVALE STATION, Michael B. Jordan, in to play the son of Apollo Creed, an idea he developed and pitched to Stallone.

Stallone returned, playing Rocky as a mentor, leading to an Oscar for Best Supporting Actor.

Black Panther (Chadwick Boseman) was first introduced on screen in Marvel’s CAPTAIN AMERICA: CIVIL WAR, a king of a secretly highly technologically advanced African nation, Wakanda. One of the common complaints with Marvel films is their lack of strong villains. Ryan Coogler bucked this trend, teaming up with Michael B. Jordan again to have him play sympathetic villain and challenger to the throne Killmonger.

What is Ryan Coogler’s advice for aspiring filmmakers?

How to find a director’s vision…

1. “I wanted to tell epic stories, stories that felt big and fantastic, I liked that feeling as an audience member when it felt like I went on a flight and felt out of breath and I couldn’t stop thinking about it days later. I wanted to make stuff that gave people that feeling – but I wanted to do it for people who look like me and people I grew up with.”

2. “I tend to like movies where the filmmaker has a personal connection to the subject matter. I don’t know if you could find a group of films that deal with Italian-American organized crime better than GODFATHER 1, GODFATHER 2, MEAN STREETS, and GOODFELLAS. Show me a movie about Brooklyn better than DO THE RIGHT THING.”

3. “It’s important to me to always work on projects that have things that I’m passionate about in them. This work is so all-consuming that to do this job right, you have to throw yourself at it 24 hours a day for years at a time… I think the worst thing that can happen to a piece of filmmaking is when the director, the guy that’s at the head of the ship, stops caring and gets fatigued and is just clocking in. So I try to always make movies about something that I’m obsessed with and about things that I have questions about.”

How to write a screenplay…

4. Ryan Coogler on the responsibility of basing films on true stories: “Every single choice that I made was based off research, and off things people told me about Oscar, because I didn’t want to go out and invent this character out of thin air… I don’t think he’s portrayed as a saint at all. We try to be even-handed.”

5. “The theme of the film [BLACK PANTHER] is, ‘Am I my brother’s keeper?’ Each character has a different answer to that question and only one changes his answer… My favorite action movies have themes that are deep, that you can chew on. and that what was what we were trying to do, to make a movie that functions the way it was supposed to but has some depth to it.”

6. Ryan Coogler on setting FRUITVALE STATION over the course of a single day: “I always knew I wanted to tell it in that format, spend time, let things breathe, let the audience spend time with the character. Ideally the people who watch this film would never know that person, or spend five minutes with him. Now they spend 90 minutes with him.”

How to direct actors…

7. Ryan Coogler on his collaboration with Michael B. Jordan: “Based on his body of work I thought he’d be the right person to go to for the role. But I wanted to sit down and meet him first because I learned in film school that I like to work very closely with my actors. We have to have chemistry for us to be able to work.”

9. Ryan Coogler on directing Sylvester Stallone in CREED: “He’s got a great dexterity to him. He can make a scene intended to be dramatic funny, he can make what’s funny dramatic, and he can very often make scenes both with much ease. He uses substitution a lot in his toolkit, he’ll use personal substitution, and I think he works that way as a writer as well. I talked to him a lot about his life.”

10. Ryan Coogler on using hand-held long takes in FRUITVALE STATION: “I admire filmmakers who let the type of story dictate the cinematic style, dictate the mise-en-scène, dictate how they approach, how they capture, how they work. In this film, I looked at my goal, and my goal was to bring people close to this person, this family, these relationships, and I wanted a sense of immediacy. I wanted a lack of any kind of barriers. There are only a few scenes in the film on a tripod.”

11. “People will forgive pretty much every technical thing before they will forgive bad sound. Your movie could look amazing, but if on every cut, the audio track is popping and making them aware of the cuts, it will pull them out. It’s so important. Orson Welles, he basically used to make movies over the radio. Really, the gateway to people’s imagination is what they hear. That’s the biggest tool you have as a storyteller.”

12. Ryan Coogler on staging action scenes: “I kind of look at action films like musicals, and BLACK PANTHER is definitely an action film, among other things… You know how in musicals, when our emotions get bigger than dialogue, it’s time to sing – you get it out, and then go back to dialogue. In a true action movie, a true fight film, it should feel the same way. We’re talking, but if it gets too intense, we’ve gotta fight. So each fight should feel different. Each fight should tell a different story about the characters’ emotions.”

How to have a filmmaking career…

13. Ryan Coogler on collaboration: “Filmmaking is a collaborative art form. Find people who you enjoy working with, because it makes it much easier… Find collaborators that can bring out the best in you and be honest with you, but that you also like working with.”

14. “There’s so much information out there for us and the world is so much bigger for us than it was for our parents in many ways. So in that world of information, there’s more pressure on us to try to find ourselves and find our passion. And a lot of times with the generation before us, it was just about finding a good job. Do whatever is safe, right? But in our generation, it’s like, do what makes me happy.”

15. Ryan Coogler on thinking commercially as a director: “It’s not the artist’s job to be thinking about money. Marketability and business is the antithesis of art. That’s why Sundance exists and it’s so popular. Independent filmmakers aren’t thinking about making money. Studios are thinking about that. My advice to people working in the independent landscape is not to think about making a sale but making a film that’s true to your goal and has the impact on the audience you desire. All the other stuff will take care of itself.”