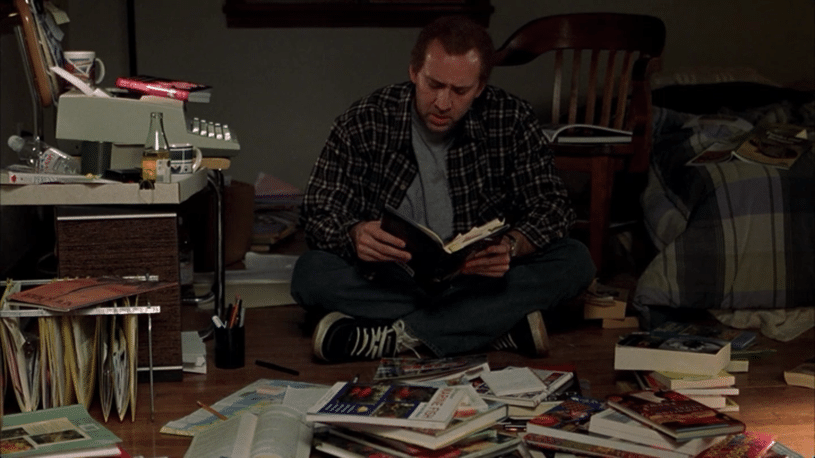 Films about writers, more than films about any other profession, can lay claim to accuracy. After all, who better to understand how writers think and feel than writers themselves?

The writer’s job is to play God. In the modern era, stories about creators playing God stretch back to Mary Shelley’s original Frankenstein. Her full title dubbed him “the modern Prometheus.”

In Greek mythology, Prometheus defied the Gods to create man out of clay and give them fire. Frankenstein defies God by creating life out of dead body parts.

In a sense, all Frankenstein stories are films about writers. They’re about the responsibility a creator has to their creation.

(ALIEN: COVENANT is the most recent update, adding a convoluted twist. David (Michael Fassbender) is an android created by man. Man are created by a mysterious race called Engineers. The Engineers also created Aliens, but David, the android, perfects them. Man, the inattentive creators, are indirectly architects of their own destruction.)

Bride of Frankenstein - The Prologue

At the same time, as Uncle Ben tells Peter Parker, with great power comes great responsibility. A film that tortures its characters sadistically without any larger point becomes difficult to watch.

It’s this contradiction – the need to care for characters while hurting them – that fuels many of these films about writers.

In the film STRANGER THAN FICTION, the author (Emma Thompson) is literally God. At least, she’s God to her creation, Harold Crick (Will Ferrell), who inexplicably begins hearing her voice.

Frustrated and stuck for an ending, the author keeps trying to kill Harold off. However, she has writer’s block, unable to play God with his fate.

Harold persists, stubbornly. Not only does he live but he tries to get into contact her and make his case.

It’s common to hear writers say that their characters take on lives of their own:

This takes a sinister turn in Stephen King’s work, a great deal of which has been adapted into films about writers.

In THE SHINING, Jack Torrence (Jack Nicholson) is an English teacher and aspiring novelist. His demons torture him – alcoholism and his abusiveness among them – to the point where he is unable to write and driven mad.

I’m your number one fan.

Neither authors play God. Instead, they are former Gods brought low. This helplessness is part of what makes these so terrifying as films about writers. Stephen King externalises and explores his fears.

However, film-making is also a collaborative process. While the authors in these films work with editors and respond to critics and fans, in the end prose writing is a different beast.

In film and TV, a lot of money and jobs are on the line. The script is a blueprint for the actual work, and everyone ends up having their input. As a result, films about writers and films about screenwriters are different.

Screenplays are not works of art. They are invitations to others to collaborate on a work of art.

JURASSIC WORLD elaborates on this with humour. While this isn’t one of these films about writers, it can be read as an allegory for franchise filmmaking.

In the film, there’s corporate pressure to come up with bigger and better dinosaurs to satiate a restless public. This reflects the increasing need for more and more spectacle to lure an audience into the cinema.

The dinosaur park is full of corporate tie-ins, like Starbucks or Jimmy Buffet’s Margaritaville. Is this lazy product placement or a cynical comment on that same system of product placement? Why not both?

ADAPTATION is one of the rare entries in the “films about writers” canon that’s about a screenwriter.

It also grapples directly and personally with this art and commerce problem.

In it, the neurotic Charlie Kaufman (Nicolas Cage) struggles with adapting an un-adaptable book. His anxieties about screenplay formula and the more commercial pressures of the industry manifest in his brother Donald (Nicolas Cage).

Partway through the film, while Charlie suffers from writers’ block, Donald sells a ridiculous, albeit high-concept, thriller script for a huge sum. Charlie seeks out Robert McKee (Brian Cox) for advice, who gives him a straight talking to.

Ultimately, who is right? The film ADAPTATION itself ends with an action-packed, neatly arc-resolving third act, following McKee’s advice earlier in the film…

Do I have an original thought in my head?

THE NINES, a low-budget independent film by screenwriter John August, is told in three chapters. The middle one takes the form of a reality show centring around a TV showrunner, Gavin (Ryan Reynolds).

As the film reveals partway through, the Ryan Reynolds character is actually a demi-God. He creates worlds to live in and people to live with, forgetting his own status.

Being a writer requires some degree of narcissism and ego, to play God the way Frankenstein did. At the same time, this wreaks havoc on Gavin’s personal life. (In the third segment, Reynolds plays Gabriel, a games designer, and describes “God mode.”)

On the meta-narrative level, the Reynolds character has become too involved with his creations. He can no longer step back and separate them from his own identity.

But you’re not most people. You created the world. You know all the secret codes.

There’s a reason films about writers appeal to writers. It’s natural to feel like a creator whose creature is out of your control, whether it’s because the characters start talking to you or because of external factors. This is the most dangerous – but also the most exciting – feeling.

Sometimes the work itself disguises this anxiety. In films about writers, it bubbles to the surface.

If you enjoyed this article, why not check out our article OPINION: Great Dialogue is All in the Subtext?

1 thought on “OPINION: Lessons For Screenwriters From Films About Writers”