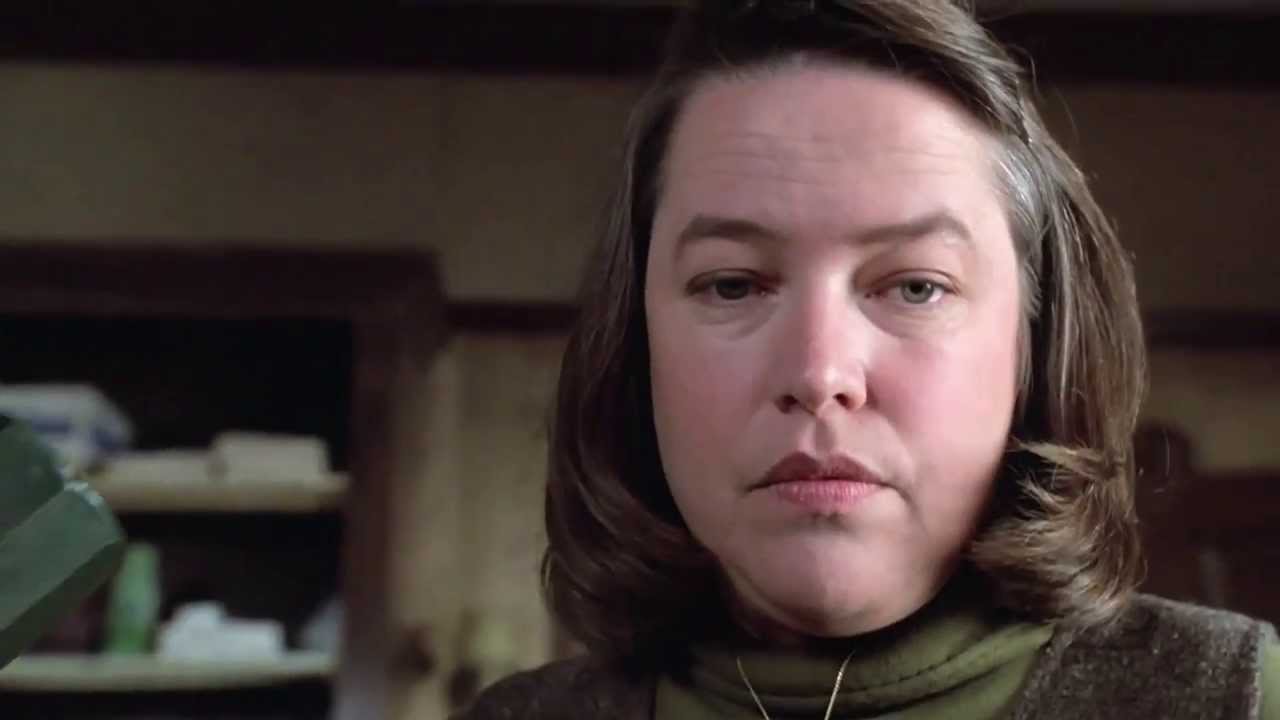 In this series we look at scenes and moments where a film or TV show has revealed a great deal of character information in a short amount of screen time. This installment focuses on Annie Wilkes (Kathy Bates) from MISERY.

MISERY saw legendary screenwriter William Goldman adapting a Stephen King novel with Rob Reiner directing. King liked Reiner’s STAND BY ME, adapted from one of his novellas, and entrusted him with this, one of his most personal works.

While the film version adds in a subplot about the sheriff investigating Paul’s disappearance, this is still a two-handed thriller: two characters, trapped in a room, locked in a battle of wills.

Paul Sheldon (James Caan) is a writer known for his romance novels featuring Misery Chastain. Driving through a snowstorm after finishing his latest, non-Misery work, he crashes.

A nurse and his self-proclaimed number one fan, Annie Wilkes (Oscar-winning Kathy Bates), rescues him and nurses him back to health.

Soon however, Paul realises that Annie has other intentions…

Who is Annie Wilkes?

Annie Wilkes, a nurse, lives an isolated life on a farm in Colorado.

She’s a fan of romance novels, including the Misery series by Paul Sheldon.

How is Annie Wilkes’ character revealed by the action and dialogue?

The scene of a car crash, covered in snow.

A figure pries open the car, pulls Paul out and performs mouth to mouth. The figure carries him and his manuscript away from the car.

Paul slowly regains consciousness. He’s lying in a bed, hooked up to an IV, legs broken.

He sees Annie Wilkes’ face looking over him. She claims to be his number one fan.

Over three brief scenes, she brings him medication and reassures him.

He’s been there two days. She couldn’t risk driving to the hospital. The phone lines are down. She tells him to rest.

Later she tells him that he won’t be here forever. He’ll walk again. Annie is proud of her work on his legs, as well as popping his dislocated shoulder back in. 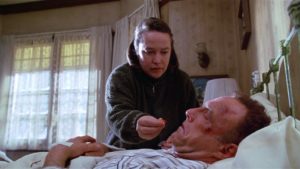 What do we learn about Annie Wilkes in these scenes?

Annie is first introduced in small glimpses, obscured by the snowstorm as Paul fades in and out of consciousness.

On seeing the crash, Annie immediately knows what to do. What’s more, she’s equipped to do what needs to be done. She has the right tools and the right medical and survival knowledge.

Whoever she is at this point, it’s clear that she belongs in this inhospitable landscape far more than Paul does.

Annie examines the folder that keeps Paul’s latest manuscript. She puts it safely under her jacket before she lifts Paul onto her shoulder. This small moment establishes one of the central themes of MISERY. Which is more important, Paul’s life or his work?

Does the author still own his work after sending it out into the world, or does his audience? Paul has one answer, but Annie has another.

Annie is properly introduced from Paul’s point of view. Her face slowly comes into focus with the repetition of the line, “I’m your number one fan.”

Annie seems pleasant and eager to please, proud of her work and honoured to have Paul in her home. She dresses plainly and wears a crucifix. Again, she fits in with the rural landscape.

However, the repetition hints towards an obsessiveness that could turn dangerous. She’s also chatty, with a need to fill up any moment of silence.

Annie dabs Paul’s forehead and feeds him pills in a motherly but always dominant way. Whether intentional or not, she reinforces how much Paul is at her mercy.

The audience, like Paul, don’t entirely know what to make of her yet. The result is that she’s scarily unpredictable.

Paul only gradually realises who Annie really is and what she wants – to keep Paul captive and force him to continue writing what she wants him to write.

She’ll never come out and say this, of course. She doesn’t threaten him. She needs to be able to pretend, to herself if no-one else, that everything is fine. Naturally, when the snow clears, she will take him to the hospital.

Already in Annie Wilkes’ first scene, MISERY is training the audience to spot the gaps in Annie’s personality, to understand the real meaning behind her words. Despite Annie’s assurances to the contrary, it’s clear there’s something wrong here.