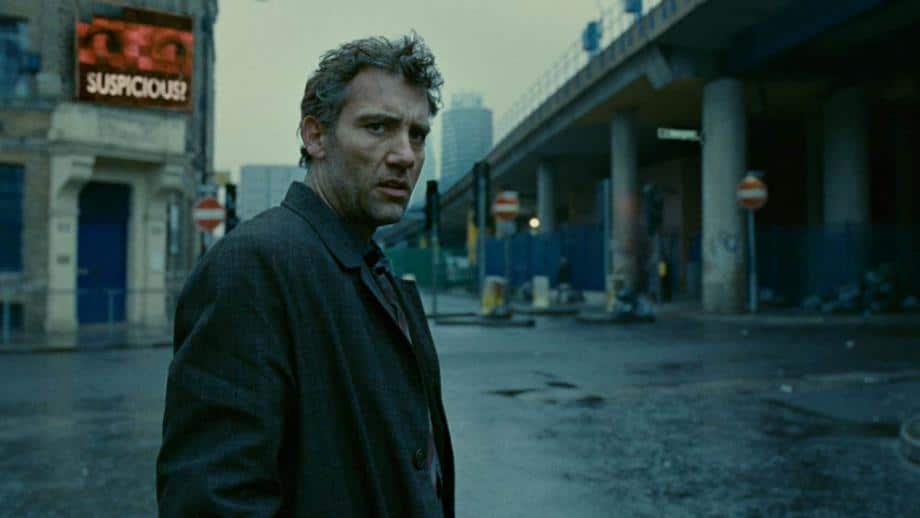 In our Genius Character Reveals series we examine scenes and moments where a film or TV show reveals a tremendous amount of character information in a compressed amount of screen time. This instalment focuses on Theo Faron (Clive Owen), the weary and reluctant hero of Alfonso Cuarón’s prescient dystopian thriller CHILDREN OF MEN.

Theo Faron and CHILDREN OF MEN

2027. Humanity has been infertile for 18 years. The United Kingdom, facing the collapse of world order, has become a police state.

CHILDREN OF MEN is based on the novel by P. D. James. Several screenwriters are credited, reflecting the long development process of the project: Mark Fergus & Hawk Ostby, Timothy J. Sexton & Cuarón himself, and David Arata.

The film was nominated for three Academy Awards, including Best Adapted Screenplay.

Who is Theo Faron?

Theo Faron is a cynical middle-aged bureaucrat. He becomes a reluctant saviour.

At the start of the story, he’s kidnapped by Fishes, a militant immigrants’ rights group led by his estranged wife Julian (Julianne Moore). She wants him to use his government contacts to help transport the pregnant Kee (Clare-Hope Ashitey) to the “Human Project”, who are trying to cure infertility.

How is Theo Faron’s character revealed by the action and dialogue?

A news report begins over black. Diego Ricardo, the youngest person on the planet, has died.

A group stand in a cafe, watching the news. A man enters, Theo Faron, and makes his way through the crowd.

He orders a black coffee and counts his change. The TV news report momentarily distracts him.

Coffee ready, Theo slips out again. The crowd has grown.

He exits onto a busy London street. Familiar sights, such as red busses, rickshaws, taxis, pedestrians. But there are more and bigger screens, it’s dirtier, and there’s a bigger police presence.

Theo rests his coffee on a telephone exchange box and looks around.

He casually pulls a bottle of whiskey from his jacket pocket and tops up his coffee. Satisfied, he’s about to replace the lid when the cafe explodes.

What do we learn about Theo Faron in this scene?

Theo is introduced as part of a crowd, a not particularly special everyman. His clothes are drab, blending into the colour scheme around him.

However, he also stands out in some ways. He enters and exits the cafe, while the crowd stay still inside.

Theo’s fleeting interest in the TV news is crucial for establishing the starting point of his arc. He turns his back (here literally) on other people and on the situation in the wider world. He buries his head in the sand.

Here’s how the screenplay describes him:

Detached, unkempt, scruffy beard, glasses, Theo is a veteran of hopelessness. He gave up before the world did.

Theo’s backstory, revealed later, explains how he got this way. He used to be an activist but gave it up when his son died.

It’s difficult to make a film that’s about a societal problem. To tell a narrative, we need to focus in on a set group of characters. As a result, a society-wide problem is often reduced in scale to one that can be caused and solved by individual people.

CHILDREN OF MEN works around this dilemma in several ways. The documentary-style camerawork frequently departs from Theo’s side, a reminder that he is just one of many potential focus points.

Also, the screenplay establishes Theo as an everyman. He is a microcosm of the deteriorating society around him.

Once Theo lost his personal stake in the future, he gave up trying to improve it. Similarly, once it’s clear there will be no future generations, civilisation across the globe starts to crumble.

Theo is not an extremist on either side. Like the bulk of people, he doesn’t care until something affects him.

It’s no coincidence that one of his few friends (Jasper, played by Michael Caine) lives far out in the woods, away from other  people.

Theo describes the carnage after the bomb went off to Jasper. Jasper asks Theo what he did. Theo simply says:

The casual way Theo pours the whiskey into his coffee – and the fact that he has whiskey on hand – speaks volumes. He might be an alcoholic, but he’s a functioning alcoholic. This is a routine.

At the same time that this is happening, the audience are getting an appreciation for what London looks like in the future. Theo, however, just walks past these strange and extraordinary sights. To him they are mundane, part of his everyday reality.

This is a clever way to bring an audience into a sci-fi or fantasy world. The script aligns us closely with Theo. We even see the TV news through his eyes. As a result, we look to his reactions and identify with them. We start to understand what’s normal and normalised in this world.

Theo’s whiskey and the way he avoids the news are survival mechanisms, figuratively and literally. They allow him to cope with living in this dystopia. In this scene, these habits directly save his life.

This subtly sets up the conflict that Theo must face through the story that follows.

If Theo cared more about the current state of the world, he might be dead. Fighting for a more hopeful future means putting himself at risk.

Theo is not only at risk physically, as shown in this scene. If Theo drops his cynical exterior, then he also becomes at risk emotionally. This is his internal conflict.

Theo reunites with his estranged wife, bringing back old, bad memories, and puts his friend Jasper at risk. Most of all, if Theo allows himself to hope again, there’s the possibility that he’ll fail, that his hopes will be misplaced.

You can only get the suspense element going by giving the audience information.

When the cafe explodes, it’s a complete surprise. Even going back and watching a second time, there aren’t any clues that there’s a bomb in there. There’s no suspense in this sequence.

But now we have a crucial piece of information about this world. Bombs could be anywhere and go off any time. Nowhere (and no scene, however mundane and routine it seems) is safe. This creates suspense throughout the subsequent film.

The violence in this world and in this film is sudden, unexpected, loud, and shocking. As his ringing ears show, Theo Faron can no longer pretend it doesn’t affect him.

Why is this an example of screenwriting brevity at its best?

The opening scene of CHILDREN OF MEN conveys so much with so little. Theo himself only has one line of dialogue, when he orders his coffee.

It’s a fantastic example of how to efficiently establish an unfamiliar world, create tension, introduce a protagonist and juxtapose his internal and external conflicts.

The story that follows is powerful, but it’s all present in this opening scene.

If you enjoyed this article, why not check out our article the GENIUS CHARACTER REVEALS of Lou Bloom (NIGHTCRAWLER)?