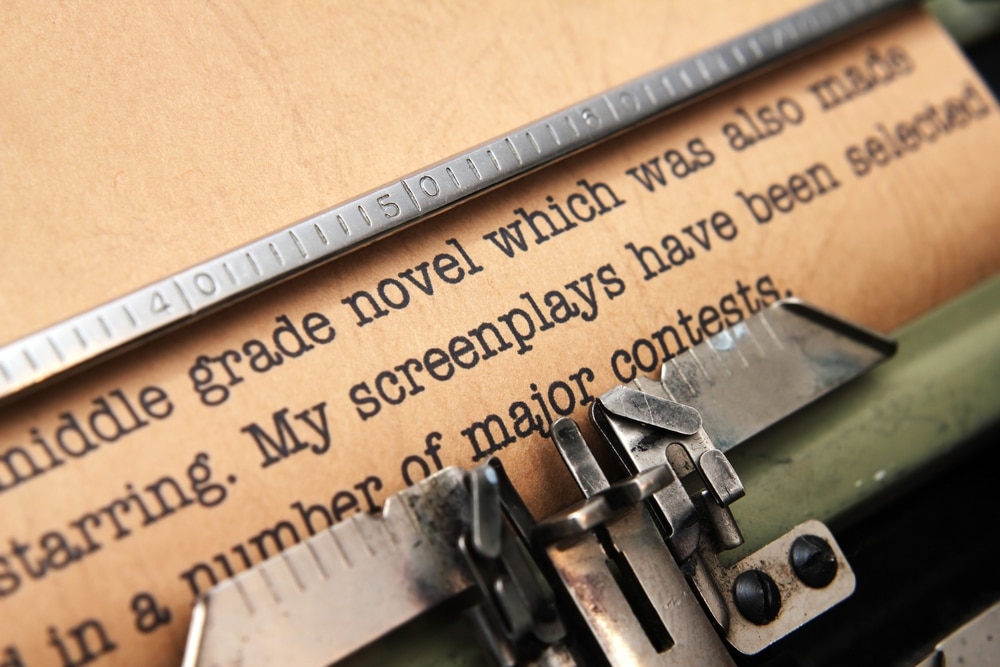 One common feature of professional screenwriters’ stories is that there is no single magic route into the industry. Everyone’s path is different. Entering screenplay contests, or entering a whole host of contests all at once, might seem like an attractive shortcut.

All you have to do, or so the contest in question might suggest, is pay the entry fee, send your script in, and wait for someone to recognise your genius.

Sadly, however, that’s not how it works.

Not all screenplay contests are equal, precious few have really big industry figures standing behind them, and hardly any carry real weight in the minds of incredibly busy executives, agents and producers who’re already struggling to keep on top of their reading pile.

How To Spot Irrelevant Screenplay Contests:

“Irrelevant” might sounds like a tough term, but if all the powers-that-be haven’t heard of it, then it probably is…well…irrelevant.

How To Spot Irrelevant Contests:

Words From A PAGE Winner:

“I recently won gold with PAGE awards (action), 1st place (action) in Fresh Voices, Top 3 in Final Draft, and placed in a few others. After winning PAGE I was contacted by managers and then signed with one. My script is getting read and my new script will be making the rounds very soon as well. For what it’s worth, I had ONE script and entered bigger contests for the most part. After speaking with managers and friends who are readers, the “general” POV is that only the biggest contests are typically career-changing. Smaller contests simply don’t garner the power and respect. It was the Page Awards that was the game changer. But I was told many times that only PAGE and Nicholl turn heads in a big way…”

However, another PAGE Contest Winner, Josh Barkey, also chipped in with a further does of reality:

“On the other hand, I won gold in the PAGE last year and got a total of one email from one low-level producer… who wasn’t even really interested in reading my script. So, there’s that.”

So there you have it.

The blunt truth is the industry doesn’t really give a damn about the absolute lion’s share of screenplay contests.

Despite the impressive statistics and advertising, for the most part the concept itself is a house built out of sand.

If you’re hell bent on entering a screenwriting contest here is the honest-to-God best course of action. Hone, refine and endlessly re-write your script whilst getting both free and pro script coverage along the way.

Then – and only then – when your script is getting Consider recommendations or higher from bona fide script readers enter it into:

That’s it, basically. But…

Put together enough cash to make a trip to Cannes, Sundance or AN Other place where you know for a fact players of significance will be at. Then use all your wiles and innovation to approach, make them like you, and finally pitch them.

Do not under any circumstances enter any contest that doesn’t appear on Stephanie’s list.

You may feel good about yourself, you may feel like progress was made the day you entered, but the stark reality is that you probably just helped finance someone right on the periphery of the business’ Friday night taco order (+ garbage collection).

You may feel good about yourself, you may feel like progress was made the day you entered, but the stark reality is that you probably just financed Joey Nobody’s Friday night taco order (+ garbage collection).

Before splashing your cash on screenplay contests then, there are certain warning signs to look out for to tell if this contest is truly worth it. A website straight out of the 1990s is an immediate red flag.

Then there’s that entry fee.

Despite many screenplay contests being run for profit, a legitimate contest will let you know exactly what you get for your hard-earned money.

They should be transparent about your odds, upfront about past winners’ successes and, in an ideal world, have feedback from previous entrants that’s been independently offered, rather than compiled into glowing testimonials.

There’s also the question of who exactly is judging your screenplay, what their expertise is, and what this means for the quality of the feedback you receive, if you do receive any.

Because they rely on writers continuing to submit to their contest (and continuing to pay for the privilege), some of these shadier contests will always flatter your script, regardless of its actual quality or where you might ‘place’.

While it’s a nice temporary ego boost to receive some complimentary words about your work, this isn’t helpful to your craft or career (or your wallet) in the long run. If tick-box praise is what you’re after, you might as well fulfil the writer cliché and send your screenplay to your parents.

Honest, impartial, experienced feedback on your work is vital if you’re going to grow as a screenwriter.

Eyes Off The Prize:

Avoid being lured in by unspecific claims of untold riches and Hollywood success that will follow a win.

Too often, that “$20,000 value in prizes” banner really means a copy of some strange, unnecessary creativity software, provided by one of the sponsors, that you won’t use and don’t need.

It’s far too easy to get sucked into this murky ecosystem of second-rate screenplay contests.

While you slowly circle the peripheries of the actual industry, you’re burning through your time, effort and money without much to show for it.

Thankfully, it’s getting harder for these more dubious contests to get away with taking entrants’ money and giving little of value back in return.

Stories of bad experiences spread quickly through the many online communities of writers.

Why Screenplay Contests Can Be A Lily Pad, Not A Silver Bullet…

If you’ve spent any time looking through production companies’ websites, one phrase is painfully familiar.

Some companies will emphasise how any unsolicited material that is sent in is returned unread or destroyed without being opened.

They’re not being harsh just for the sake of it.

This warning is to protect them and you. Beginning writers are often nervous about their ideas being stolen.

Producers and executives are nervous about lawsuits that, regardless of their outcome, suck up money in legal fees.

Ultimately, though, this restriction exists because they already have a deluge of reading to do that comes through the usual channels.

Established writers, their agents and other existing material are all vying for their time and attention.

With scripts sent over email as PDFs, it’s easy to become inundated to the point where even the common courtesy of a pass is foregone.

What we do takes so much of our time on a daily basis, especially when you’re in production. As a producer, you’re there from the inception of the concept to the delivery of it. It just takes so much energy.

Producers, Managers, Agents…All Their Time Is Limited And They Need To Prioritize…

Even if they employ readers to filter out just what’s worth their attention, man-hours are still being spent and this is a finite resource.

The same goes for agents and managers. If they’re established, they’ll have their roster of existing clients to take care of before considering reading anything by someone new.

In this environment, a win from obscure screenplay contests is not going to magically jump your script to the top of the slush pile. Boasting about what’s seen as a meaningless win, or worse, a string of meaningless wins, could mark you out as an amateur.

A win from one of the small number of respected contests is different. It’s much rarer, it’s credible and it will help set you apart.

Some of the contests with proven track records include:

However, you still have to put in the rest of the work. Although it does happen, don’t rely on agents, managers and producers flocking to you. A contest win is a good marketing tool for selling yourself and your script. It’s not a golden ticket to an instant career.

What To Do Before Entering Screenplay Contests:

There are limits on an aspiring writer’s time and money, especially if you balance writing with a day job.

It only takes a little searching around online to find out a contest’s general reputation. Look into other writers’ experiences submitting to the contest but also, crucially, its standing with those in the industry.

2. Make Your Script The Best It Can Be:

In reality, the best screenplay contests have too many submissions.

For example, the Academy offer these stats about the Nicholl Fellowship:

From the finalists, only five become fellows, or roughly 0.07% of all entrants.

Those are tough odds, whichever way you spin it.

It’s an exercise in absolute futility to release your script out before you have some independent verification that it’s ready.

How can you be confident your writing deserves to be in that top 0.07%?

Writing is, outside of partnerships, a solitary act. Staring at the same pages for hours or days, it’s too easy to hide away in your own head space.

You end up thinking that it’s all there on the page exactly the way it is in your mind.

If you think your script is ready to send into the world, seek out some detailed, independent feedback from fresh eyes. Think of it as a trial run.

Better to flag up a missing plot point or an unexplained character inconsistency now than it coming to you in a late-night realisation, long after you’ve pressed send to that prestigious contest that’s only open once a year.

One benefit of contests is that they create clear deadlines which you wouldn’t have otherwise when writing on spec.

Find a good upcoming contest that is feasible for you and appropriate for your script and schedule backwards from the deadline.

Save some money by aiming for early entry, when the fee is slightly lower. Of course, allow time for plenty of drafts and don’t leave submission until the last minute!

If you get a favourable result from this first contest, keep improving and entering that script into a few more well-known contests. Sticking within the same yearly cycle is beneficial for maximising potential buzz. Take full advantage of any benefits that come with entering, especially networking opportunities.

If your first result is unfavourable, consider it an opportunity to work on something new to submit to the next one. You never want to have all your eggs in one basket. (If the dream is for someone to ask “what else do you have?” then the nightmare is having nothing to offer in response, that potential connection slipping right through your fingers.)

Before submitting to screenplay contests, ask whether the contest can truly help develop your craft and career or if it’ll just create the illusion of progress.

In the often cloudy world of screenplay contests, there are still big hitters worth entering. However, to truly raise the profile of you and your script, aim for nothing less than a win. Make sure the contest is legit and your script is the absolute best it can be before submitting.

Approach contests deeply strategically, as one part of your overall proactive career plan.