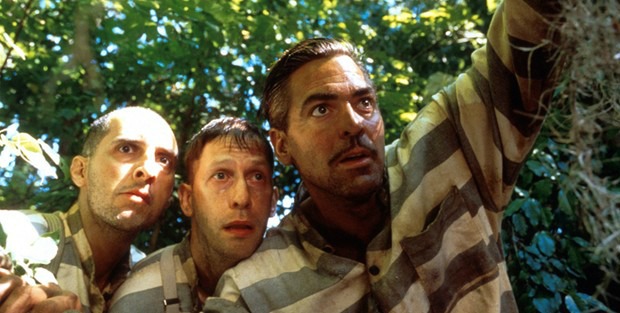 The film: O BROTHER, WHERE ART THOU? – the Coen Brothers’ take on Homer’s THE ODYSSEY ran through depression-era Southern USA. 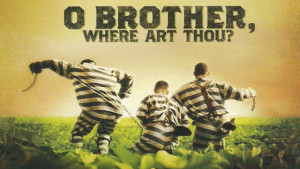 The plot: Ulysses Everett McGill (George Clooney) is incarcerated in a chain gang – but manages to convince fellow convicts Pete Hogwallop (John Turturro) and Delmar O’Donnell (Tim Blake Nelson) to escape – with the prize of millions in buried cash awaiting at his home, which is about to be lost to flooding from a nearby dam. With only days until the money is lost forever, the boys must escape a zealous sheriff, bargain their way past politicians, the Ku Klux Klan and soul-selling guitar players on their Odyssey. With such pressing concerns, you might think Ulysses would have a focussed mind – but more often he’s worried about his hair. Which he likes to style with Dapper Dan pomade.

The scene: With their car broken down, Ulysses enquires about repairs at a local garage-come-general store. “We can have the part for you in two weeks”. When the clerk tries to sell Ulysses ‘Fop’ pomade instead of ‘Dapper Dan’, Ulysses loses his cool – “I don’t want Fop god-damn-it, I’m a Dapper Dan man!” – the clerk – after chiding Ulysses for his language – say he can order Dapper Dan, but of course, it’ll take two weeks to arrive. “Ain’t this place a geographical oddity – two weeks from everywhere!”. Ulysses might be outraged, but he still buys hair-nets.

Why it’s unheralded: It’s rare for scenes with such little plot purpose and low dramatic stakes to be remembered – though “I’m a Dapper Dan man!” has become something of a catchphrase.

Why it’s great: Raising a generic scene to something memorable. With a broken down car, we’ve seen any number of logistical ‘we can’t fix your vehicle’ bridging scenes which force the protagonists to come up with a new plan. But by entwining this with Ulysses’ personal predilection for Dapper Dan hair pomade, the scene stacks antagonisms one on top of the other for Ulysses – making the debate idiosyncratic and unique to the characters. There’s nothing wrong with using archetypal scenes – boy meets girl for instance – but the key to strong screenwriting is to make invest them with the personality of your characters and script. That Ulysses still buys the hairnets when all is said and done is a great character moment – vanity over pride.

If you enjoyed this article, why not check out our Unheralded Scene: RUNNING ON EMPTY (1988)?

– Struggling with a script or book? Story analysis is what we do, all day, every day…check out our range of script coverage services for writers & filmmakers.