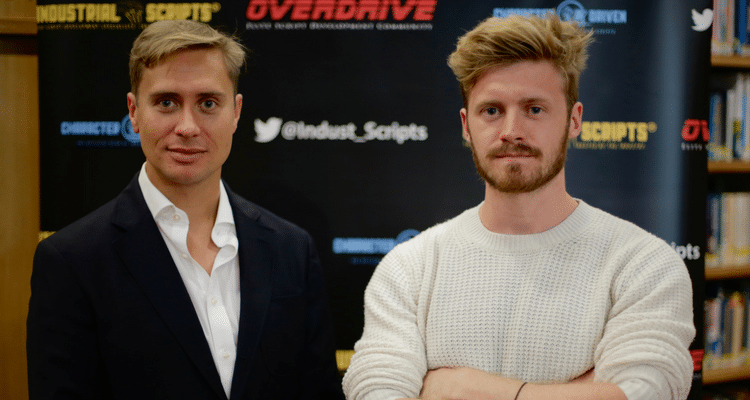 Matt Orton’s script OPERATION FINALE, about the team who captured Adolf Eichmann, one of the architects of the Holocaust, is soon to go into production at MGM with Oscar Isaac starring and producing and Sir Ben Kingsley starring. His current projects also include a film based on the Battle of Britain for Ridley Scott to direct.

You’ve been very busy recently with a number of projects, including OPERATION FINALE, can you tell us a bit about what are you working on now?

The Eichmann movie [OPERATION FINALE] starts shooting in the Autumn. It’s the first time I’ve been through this  process and it’s exciting. And I’m also working on a political thriller with a wonderful director. So yeah, juggling those little guys.

So how do you juggle multiple projects? How do you manage?

TThat’s a really good question. Very little sleep is part of it. A bigger part involves dividing my day. I try to be disciplined with getting up really early and finding a cut-off point in the day that allows me to switch over to something else, so I can work five or six hours on one project, take a pause, go and have lunch, and spend the same amount of time on another one.

A lot of the management of this stuff is quite admin-y, so it’s also about not letting the admin side of it overwhelm the creative side. So I try to turn my phone off all day, unless it’s a window of time when I’m replying to emails and doing calls, just to make sure there’s enough time to focus on the creative things, because ultimately that’s what’s important.

Exactly. Sometimes it really feels like you’re doing that.  This is the other thing as well, working with America they’re obviously eight hours behind, so people will sometimes ask, “Can you do a call at 1 PM?” and I just don’t think about the fact that that’s at 9. So that’s where the lack of sleep comes in.

But there are fun parts of it too. Yesterday I got to have a long call with our wonderful director, Chris Weitz, and an anesthesiologist about anaesthetics that were used in the 1960s. Those kind of calls are always worth staying up for.

In terms of OPERATION FINALE, am I right in thinking that was a spec script?

It was a spec script. Originally a friend put me on to the idea, and then I started doing a little bit of digging around. I thought it was a great story about the formation of Israel. It’s this huge moment in this country’s history, the first real moment where Israel was presented with an opportunity to hold its past executioners to account.

This was an incredible moment for a country which had for 12 years done its best to ignore the Holocaust. There are all these amazing and awful stories about Holocaust survivors being called nasty things and forced into poor housing, being ignored rather than comforted.

When I went to Israel and spoke to people, universally the one thing that they all remembered about the Eichmann trial was that it was this moment of national catharsis. It was this moment of them finally confronting the past, mourning together, and finally being able to move on.

You don’t get any work done, but it’s brilliant, it’s an amazing country.

And I, in reading about the main character, this guy Peter Malkin, found someone who personified that journey really well. He’s this guy who’s haunted by the death of his sister, who died, she and her children, during the Holocaust, though not via Eichmann’s hands.

He’s this guy who’s stuck in arrested development and he begins to imbue this mission to capture Eichmann with the sense that this might be the thing that will allow him to move on with his life, as opposed to someone who’s haunted by his past tragedy. That to me mirrored the story of Israel.

Eichmann's Confession Is Heard In Court (1961)

As I started to dig into that, I was lucky enough to make contact with the son of the anesthesiologist who ended up putting Eichmann to sleep. It’s incredible, you go to Israel and speak about this story and strangers in a cafe will overhear, and say, “Come over here, over here, come talk to me!” You don’t get any work done, but it’s brilliant, it’s an amazing country.

I slowly ran myself into more and more debt doing research trips like that, but then ultimately I had this script which MGM bought, and that was a really big moment.

If you enjoyed this article, why not check out our Insider Interview with Rhodri Thomas?