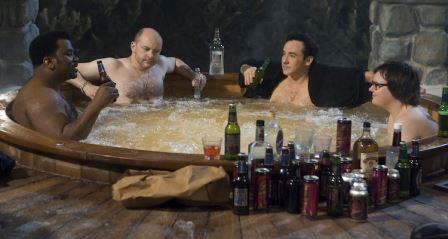 Word has started circulating that MGM is exploring a sequel to Hot tube Time Machine”, an idea I agree with  as a fan of the franchise.

MGM, if you’re reading this please feel free to use these ideas, but keep in mind that a poverty stricken future me may launch a lawsuit so its better if you just give me money now.

Going back to the era that defined western civilization, our intrepid heroes find that their steam generating machine puts them in great esteem with high society. However people soon realise a jacuzzi is a ridiculously inefficient way to generate steam so the gang falls from grace and toils away in a workhouse until they die.

Immediately accused of witchcraft upon demonstrating their miraculous machine, they are found guilty and die.

Any other age and they would have been hailed as gods (or killed), however some dude called Jesus is hogging all the fame. The boys instead live a life of obscurity  working on a struggling fig farm until they die.

The height of the Roman Empire:

Ah yes, here they will thrive, in the greatest empire on earth with its plentiful public baths. Unfortunately for our bumbling heroes it also full of cut-throat politicians who engineer their downfall and claim the machine for themselves. Thrown into the Colosseum with Russell Crowe nowhere in sight, they die.

A long time ago in a galaxy far, far away:

Clearly earth is not working out so well, so why not visit the greatest space opera ever with the best seat in the house, great idea right? Well up until Palpatine grows enraged at his skin becoming even more pruny and Darth Vader gets jealous about being unable to join in, at which point, they die.

Seeing as most eras of human civilization would prove detrimental to their health, the crew travel back to the age of giants. Unfortunately that age is full of carnivorous 6 ton lizards like the T.rex which have no understanding or appreciation for their miraculous machine and wry pop culture observations. So, they make like  Samuel L Jackson in Jurassic Park, they die.

With the success of “harder” science fiction films like Looper, Source Code and Primer, perhaps going the technical route would work best. However due the lack of consideration given to the earth’s ever changing position over time our heroes end up in the freezing void of space where, fully aware of the irony, they die.

If you enjoyed this article, why not check out our article: Screenwriting Lessons from Midnight Cowboy?