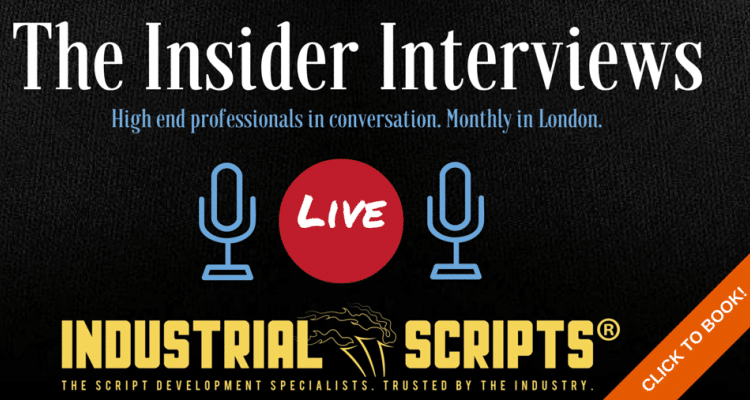 The Insider Interviews series started in 2010 as a set of recorded interviews, featuring the likes of Tom Hiddleston, Gareth Unwin, who produced THE KING’S SPEECH, Ben Wheatley and Hossein Amini, the Oscar-nominated writer of DRIVE and THE TWO FACES OF JANUARY. These can be listened to here.

Aaron Anderson was the first guest speaker for Industrial Scripts’ Insider Interviews Live events.  Aaron has worked in the industry for over ten years as a development editor. He was previously the creative executive for the UK Film Council’s Premiere Fund, where he worked across many projects, most notably THE KING’S SPEECH, TAMARA DREWE and HOW TO LOSE FRIENDS AND ALIENATE PEOPLE.

He then went on to head up the slate at Scott Free under the ‘Ridley Scott Presents’ banner. As a scriptwriter, Aaron has several screenplays in development, most notably WHITE CITY, a sci-fi thriller for Scala Films, which was shortlisted for the Film London Microwave initiative. At the time of writing, Aaron has just moved to Archery Pictures as Head of Development.

This interview covers Aaron’s journey through the industry to this point, covering early experiences, the UK Film Council, script doctoring and executive positions.  The interview was hosted by producer, James Cotton.

So Aaron, what was your first industry experience?

No not at all. I had an interest in both film and TV, prior to that I’d been doing stand-up and comedy writing so my own experience of development was rejection letters, which I’m now on the other side of, so all I really knew was that development was these faceless people, sitting in an office somewhere, not laughing at what I’d written and writing a couple of lines to me back. I got some great responses that were really helpful…and some less helpful ones. But yes, my first real experience was rejection.

I’m sure for everyone in this room the first experience was not always a positive one. But maybe experience 2, 3, and 4, was more in line with what you wanted to do? Have you had any internships that didn’t go down so well, or weren’t as helpful? Any jobs where you thought: ‘Oh god, why am I here?’

I feel like everything I’ve done in the film industry has been useful, even if it is something that you don’t think is something directly connected to what you’re doing. I still tended to meet someone or something’s happened that led to something else.

A couple of experiences helping out with people’s films that didn’t go anywhere but most of the time just doing something is much more useful than not doing something. Especially if you’re doing it in London, you’re usually meeting the same kind of people who are getting into the industry so that in itself is helpful.

You mentioned that not all of the experiences and projects may not have come to fruition. Thinking about the dogfight of development, could you maybe tell us a couple of anecdotes about projects that, from concept stage, were very promising but didn’t come to fruition and one where you weren’t sure but through the development process went beyond expectation?

There’s one project that I’ve been working on the low-budget genre slate where the film we ended up with was almost completely different from the first idea the writer pitched to us, but he had such a way of thinking, in terms of his horror idea, his whole perspective of what horror could be. Literally a protracted process of almost two years thinking about what the idea could be. That was probably 18 months of chats and him re-working the idea and then suddenly it clicked into place and became something really quite special.

And then on the other side of things, there are countless examples, especially in the genre space, of things that have a great hook into the genre film and then, nothing. You have a reason for a character to be locked in a crypt or whatever the hook is and then there’s no story. And in genre that’s even more important because you’re dealing with a really contained, constricted genre form so you have to have a story behind it.

That seems a perfect segway to the ‘Ridley Scott Presents’ slate, seeing as you just mentioned genre, and that’s what that slate is about. So what have you been looking for to fill that slate and what freedom did you have in doing so?

So I’ve been doing it for three years now, the basic concept is that we’ve got the basic financing in place and to buy that financing the model was that we would make really high concept, seductive genre films that could be done relatively cheaply, for a fairly low budget but that would really sell in the market place.

The cynical version is that the worst version of the concept would still sell and make the money back, which then freed us up to make the best version. It’s similar to what the likes of Jason Blum are doing in America. So we were looking at a slightly more Ridley Scott version of that, so horror, because that’s the bullseye if you can hit it and then sci-fi and thriller as well.

In terms of finding projects, I started from nothing really. We didn’t expect to find any projects that we could reverse-engineer, that actually fitted what we were looking for, so we met with every writer we could meet. We went out with some vague ideas of films we wanted to make, we worked in genre spaces and areas to see if we could get something like real time screenplay PHONE BOOTH or 28 DAYS LATER and gave that to writers to see if they could run with it.