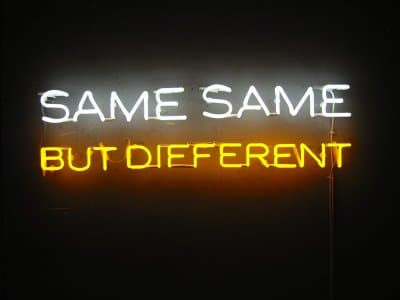 How many times have you heard someone describe a film as “it’s something meets something”? Unoriginal, or the keys to producers’ bank vaults? Industrial Scripts examines how to improve your chances of a spec sale – without selling out your originality with a list of our invaluable screenwriting tips.

“Give them the same, but different…” – Blake Snyder

There’s a good reason people use the X meets Y formula – it’s an easy shorthand to describe a plot for people who share common pop-culture references, but it’s also an instant doorway into the ‘feel’ of a movie, an instant insight as to whether it’ll be funny, action-packed, mysterious, or suspenseful and that evokes a much more powerful emotional response when deciding whether it’s “your kind of movie”.

We did it ourselves recently when someone asked us about current blockbuster hit EDGE OF TOMORROW and we described it as GROUNDHOG DAY meets STARSHIP TROOPERS, which very quickly demonstrates both the main plot (the repeating time loop) and the ‘kind’ of film it is; a sci-fi/war movie full of battle action with smart, funny and touching moments throughout.

We can also imagine the studio meeting for this. We can imagine the executives leaping up and down with excitement at this simple concept. It’s easy to grasp, it’s easy to share and it’s damned sure easy to market and sell. A home run, and so it has proven, you can practically smell the sequel… So why do so many writers strive to write the unique and original and totally unknown when what producers and studios want is “the same, but different”?

Sure, if you ask a producer what they’re looking for they’ll tell you they want to see new and original, but try selling it to them and you’ll very quickly feel the icy wind blow and the tumbleweeds roll past while you’re pitching, because despite what they may tell you to your face, the truth is that “the same, but different” is what sells screenplays while ‘new and original’ actually scares producers to death.

You see, as an audience, when we trundle down to the multiplex and part with fifteen quid to see a film there’s an expectation that we will be entertained. If we’ve paid to see a thriller we expect to be thrilled, if we’ve paid to see a romantic comedy we expect romance and laughter, and if that expectation isn’t met then we, justifiably, get the hump. It’s like someone bringing you a cup of tea without sugar (or with sugar for the ’sweet enough’ amongst us), it’s still tea but it’s not how we like it, so we wish they hadn’t bothered. Producers know this, and they don’t want to give us the hump they want us to be happy, so they look for stories that fulfill this criteria.

Of course they’re not looking for something that slavishly copies an existing film, that would be boring. One of the top screenwriting tips is that creating something boring is the worst crime a writer can commit. No, they’re looking for something similar enough to be recognisably like the thing that audiences liked before, but with enough added difference to make the thing interesting again. Something they can market to an audience they know exists, that they think they can make a success of, but at the same time offers a new twist or new angle to entice film goers back to the multiplex. “The same, but different”.

It happens all the time.

MRS DOUBTFIRE is the same as TOOTSIE, but different.

WORKING GIRL is the same as THE SECRET OF MY SUCCESS, but different.

BIG is the same as VICE VERSA, but different.

GALAXY QUEST is the same as THE THREE AMIGOS, but different. (No really, think about it)

The world of TV positively thrives on the concept of “the same, but different”. Not only are lots of TV shows only slightly different to shows on other networks, SHERLOCK, ELEMENTARY, GRIMM, ONCE UPON A TIME, QUANTUM LEAP, EARLY EDITION, but TV audiences actually don’t want their favourite TV characters to learn and grow and change the way they do in films, they want them to come back each week, and do the same thing over and over for 5 seasons or more, “the same, but different”, until the series finale. In fact if you watch a lot of TV you’ll notice different shows even use the same story lines for episodes over and over; the accidental hero, the lie-that-got-out-of-control, the stuck-in-a-lift, and for the holiday season, the old flashback episode, otherwise known as the ‘cheesy clip show’.

“The Same, but Different” Screenwriting tips

1) Find your voice – Whether it’s sparkling dialogue (Tarantino), great action sequences (Shane Black) or laugh-out-loud comedy (Judd Apatow), if your characters have a unique way of expressing themselves then you can write any genre and make it sound new. Finding your unique voice is by far the hardest thing about writing but look how far it took Diablo Cody in a short space of time.

2) Undercut the genre – Set up your story as typical of its genre and then pull the rug out from under the reader by twisting it in a completely different direction. Anyone who remembers watching FROM DUSK TILL DAWN for the first time will know exactly what we mean.

3) Mash two unusual genres together – Science fiction does this all the time by adding “in space” to an existing idea:

ALIEN is famously JAWS in space.

OUTLANDER does a stellar job of mashing together sci-fi and Vikings but there are other options.

ABRAHAM LINCOLN: VAMPIRE HUNTER is positively inspired, just make sure you do better a job than COWBOYS AND ALIENS.

4) Flip the traditional roles – Take a standard genre and flip the stereotypical roles to make it unique.

the cowardly novice who has to learn to fight.

BRIDESMAIDS gave us gross-out gags in a female-driven film,

5) Make it personal – You can tell when you’re reading a script that it comes from somewhere very personal. The emotions on the page are heightened, everything seems more real, and the passion comes through in the words. Reach down inside yourself, make your protagonist go through the same things that you’re going through and it will lift your writing.

“But mine is an original voice!” I hear you cry, “I don’t want to make ‘Hollywood’ movies!” you wail, and that’s fine, if you genuinely have something new then great, but don’t try and sell it, make it yourself. If enough people like your films you’ll soon build up a loyal following and each one will get easier and easier to make until, eventually, you may not actually be a risk anymore. We’ve met several write/director-producer teams that make a living making the kind of films they want and they have a cult following that keeps them in business so it can work.

But for the rest of us, striving to write the kind of action/adventure, thriller, sci-fi, comedy movies we love to go and see each week, “the same, but different” is how we’re going to get noticed, so don’t rail against it, embrace it, and hopefully your “same, but different” idea is the one we’ll be watching on the big screen.

If you enjoyed this article, why not check out our article: 12 Things Screenwriters Can Learn from Musicals?