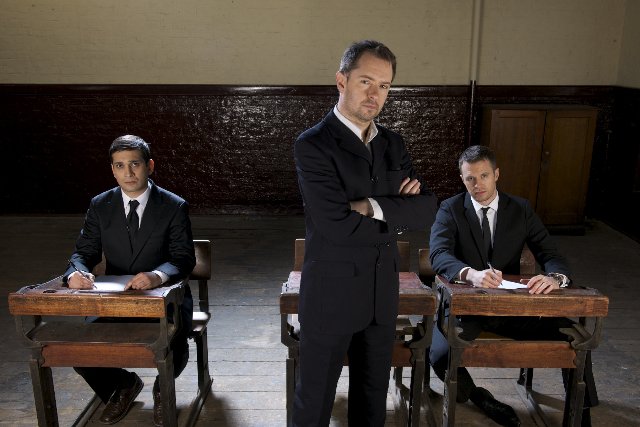 Writer-director Stuart Hazeldine was interviewed as part of our Insider Interviews series way back in 2010, and this Q & A was originally published on our old site. Since this interview came out, Stuart has sat in rooms and talked hard story with Steven Spielberg and Michael Mann, seen not one but two of his major movies burn in the flames of Hollywood’s development hell, and kept the big screenwriting deals rolling in.

Going back to the beginning, when did the idea of working in film, entertainment, showbiz/TV first come onto your radar?

I think it came onto my radar before I even consciously knew what I was doing. I was compulsively filling school exercise books with elaborate drawings inspired by watching TV as early as four years old. I didn’t even really know what I was doing. I was just a kid in the corner who was doing SIX MILLION DOLLAR MAN robots and all kinds of crazy stuff. I was pretty obsessed with Sci-Fi back then. I think my mother went to an open day, and the teacher asked whether she had any idea how obsessed with science fiction I was and my mum said “he’s not that obsessed with science fiction.” And he said “Mrs. Hazeldine, let me put it this way: If I asked your son to draw me flowers, he’d draw me flowers on Mars.” So that was when I was literally six or seven, and at the time I didn’t even know how movies were made, I didn’t know what a film director was. I think it was just in my DNA and like it is for a lot of kids. It wasn’t really till the first year of University that I thought of doing it as a job, because there are no Careers’ Officers out there telling you how to become a film director. I didn’t really have anyone in my family who was in any way engaged with the entertainment industry, and film cameras were pretty expensive when I was a kid, so I never asked for one and they never game me one. But then I got to University and there was a filmmaking society there that had Super 8 Cameras and film and we’d just go out around the campus shooting stuff. I caught the bug pretty quickly and I just knew from the end of my first term that writing and directing films was what I wanted to do.

Was the big goal always to direct?

Absolutely, yes. From moment one I never planned to be just a writer. Getting into writing, as tough as it is, in comparison to directing is easier and there’s less financial investment. To write you only need to get a software package and write something good. It doesn’t cost a lot. I was always a compulsive writer. I wrote huge long stories in secondary school that I got so involved in I never gave them in for marking in Creative Writing. I never saw any reason to give up the creative leadership of the process if I could carry it all the way. If I could get the original idea, turn it into a script, direct it and see it through to the screen, then why not do that? Then I found out that the film industry occasionally allows that to happen. I think that because I started out with the desire to write and direct I just decided to push on down that road. If I was going to be stopped, I wanted to be stopped by me realising I was inadequate, or by everyone that I knew telling me so. What I didn’t want was to be stopped by people saying that’s not how we do it in the industry. That, to me, is not a legitimate reason. So I just carried on down that road. The reason I chose to specialise in writing in the beginning is because directing features is a job you don’t jump straight into. You either get to direct commercials or pop promos or you get to work up through one of the craft routes: editing, photography, or writing. Out of all those it seemed to me the key was screenwriting, being able to write a great script was the main foundation. And I was aware that a lot of the professional screenwriters who turn into directors fall short in the non-writing departments. They don’t have a sufficiently developed eye or sufficiently developed overall visual vision for the film. So I knew that if I got to be perceived as a writer there would always be that question mark. But I always believed that I had what it took visually; I started out visually when I was a kid, and the writing came second. But going to the film sphere I felt it needed to be the other way around, I wanted to learn the craft of really solid screenwriting. I knew that when the day came for me to direct that I could bring my visual sense out of the closet. I think, thankfully, EXAM has started to show that I’m not just a writer who has leveraged his way into directing but I have actually got some directing skill as well.

If you enjoyed this article, why not check out our Insider interview with David Scinto?