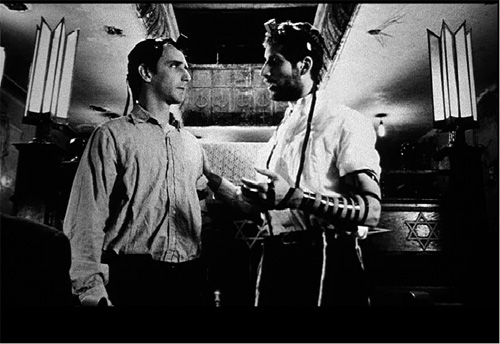 The film: After last month’s RUSHMORE, we look at another low-budget movie from 1998 – must have been a good year! – that kick-started another great writer-director’s career and serves as a text-book example of how a small, intimate feature can be a gateway to a Hollywood career. Earning Darren Aronofsky an award at Sundance that year, PI was heralded as a minor classic the instant of its release and time has only succeeded in cementing its position. A searingly brilliant psychological thriller that retells the Frankenstein story and explores the dangers of man seeking to play God, it’s one of the few films – A BEAUTIFUL MIND, I’m looking at you – to convey mathematics in a coherent, engaging and cinematic way. 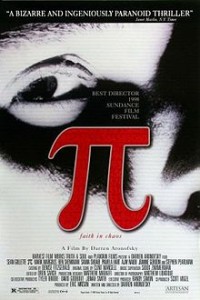 The plot: The story concerns Max Cohen (Sean Gullette, one of the film’s co-writers), a brilliant but semi-autistic mathematician who builds a home computer in the hope of uncovering a pattern linking everything from the stock exchange to the Voice of God, believing that he alone can thereby understand the true meaning of life. Abetted and frustrated in equal measure by a scheming headhunter, an Orthodox Jew, and his own mentor, an ageing and more realistic maths teacher, Sol, Max suffers from crippling migraines and an increasingly unstable mental condition as he tries in vain to make sense of the world around him.

The scene: As Max’s mind starts to unravel, his headaches morph into hallucinations that both express and fuel his growing paranoia. Suspicious that people are after him for his insight into the workings of the stock exchange and afraid of what his own brilliance might mean for him, he has a number of inexplicable encounters with strangers on the subway, including repeated visions of someone who might be himself on the opposite platform at his local tube station. In this scene, he makes the decision, as his migraines worsen, to confront the possible doppelganger and find out what’s really going on…

Why it’s unheralded: The most famous scene in PI is probably the one that this sequence sets up (but which comes much later): Max drilling into his own head to dispel the noises and visions that have plagued him since he first began his search into the numerical unknown. Though renowned for turning the mathematical abstract into a concrete and enjoyable film, the great strength of the story is its depiction of a man unravelling psychologically, and this scene lies at the heart of that emotional disintegration. Most films on this theme (REPULSION, THE TENANT, Aronofsky’s other masterpiece BLACK SWAN) find sexual demons lurking at the core of what drives their protagonists crazy, but PI bucks the trend by making few allusions to Max’s sexuality (there’s a neighbour he unfairly ignores but that’s about it) and instead concentrating on his desire to play God. Either way, this scene marks the start of Max’s real descent into madness but although the film as a whole is still very much seen as a classic of low-budget film-making, for some reason no individual scene (apart from the aforementioned head-drilling) seems to get much air time…

Why it’s great: The genius of this scene lies in its pure cinematic craft, using almost no dialogue and a surprisingly simple set of visuals to create a highly memorable nightmare scene. Three main elements contribute to its success. Firstly and most importantly, the soundtrack. This is always one of the hardest things to convey in a script, whereas on-screen it carries far more weight than many viewers appreciate. Here, the combination of repetitive, angular noises and a fantastic atonal score by Clint Mansell help create a jagged, unsettling and ultimately terrifying underpinning to the scene. Secondly, the judicious use of standard horror/thriller techniques in a film that has previously avoided them: point-of-view shots of the empty subway, the device of the doppelganger (a horror staple), and the trail of blood that leads Max towards his own ‘heart of darkness’ on the opposite subway platform. Finally, Aronofsky and his co-writers pay off the horror-esque withholding of information with a shocking reveal in the bloody brain that sits on the subway steps, and which Max prods with his pen to provoke the blistering headaches. The sheer incongruity of a brain appearing in this unlikely situation makes for an incredibly memorable image around which to structure the scene, and ensures that the moment remains unforgettable. Watch the scene here: https://www.youtube.com/watch?v=aulRoQTK5HY

If you enjoyed this article, why not check out our Unheralded Scene: NOTES ON A SCANDAL (2006)?