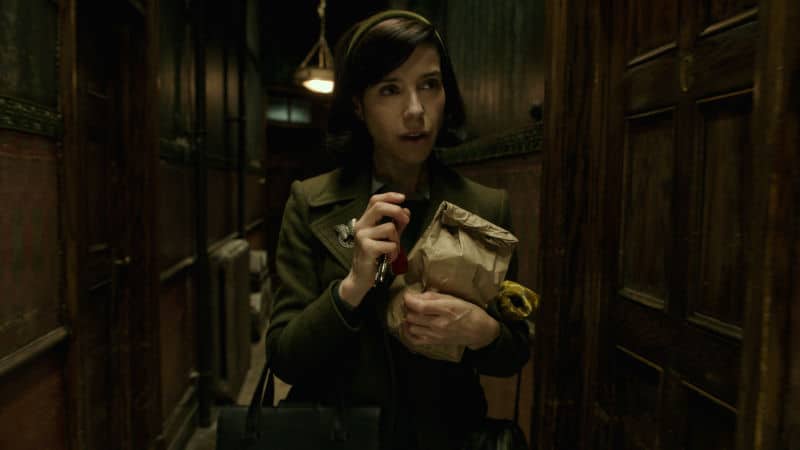 2018 was a great and diverse year for cinema. Everything from BLACK PANTHER by Ryan Coogler to Disney’s long anticipated INCREDIBLES 2. In our Genius Character Reveals series we examine scenes and moments where a film or TV show reveals a tremendous amount of character information in a compressed amount of screen time. This instalment focuses on Elisa (Sally Hawkins), the non-speaking cleaner who falls in love with a human-amphibian creature in Guillermo del Toro’s fantasy romance, THE SHAPE OF WATER.

Elisa and THE SHAPE OF WATER

THE SHAPE OF WATER is a fairy tale romance set in the 1960s. Taking inspiration from classic monster movie CREATURE FROM THE BLACK LAGOON, it tells the story of a cleaning woman who falls in love with an amphibian man (Doug Jones) held in captivity (dubbed “the asset”).

Elisa, a woman who can’t speak, works in a government facility in Baltimore as a cleaner. Her official surname is Esposito, meaning “orphan.” She was found as a baby by a river with scars on her neck where her voice box was cut.

She lives alone in an apartment above a cinema and next to Giles (Richard Jenkins), a struggling illustrator who’s still in the closet about his sexuality.

How is Elisa’s character revealed by the action and dialogue?

THE SHAPE OF WATER opens with a voiceover from Giles, Elisa’s neighbour:

Underneath this, views of an apartment underwater and then, finally, Elisa, floating above her bed.

Roughly 30, but ageless, with child-like eyes, dark, lush hair and a thin, beautiful mouth slightly curved into a satisfied smile.

She drifts down to the bed. An alarm clock goes off. Elisa wakes up in her apartment. No water.

Elisa gets up. An ambulance passes her window and the sounds from the empty cinema below her apartment filter up through the floorboards.

She drops three eggs into boiling water, winds an egg timer, and undresses in the bathroom. This reveals:

On both sides of her neck: two keloid scars, diagonal and about three inches long.

Setting the timer to two minutes, she gets into a full bath, spilling some water:

She sighs. Then rubs her hand with soap, plants her two feet on the base of the tub, sighs again and goes to work on herself, gently, slowly-

-but with the timer ticking away-

She’s almost there when the timer DINGS.

She takes a page off the calendar, revealing a saying: “Time is but a river flowing from our past.” Elisa shines her shoes, takes the eggs out, packs one for lunch and two on a plate with a sandwich.

Undoing the three locks on her door, she takes the plate out of her apartment and into her neighbour’s, using a key to let herself in.

What do we learn about Elisa in this scene?

The voiceover establishes the context for this story. It’s a fairy tale. The fantastical opening contrasts with Elisa’s everyday routine that follows, and the script balances these two sides of the world throughout.

Elisa herself embodies this balance, making her a suitable protagonist for this story. She’s a grown woman, but the script also describes her as ageless and child-like. She has an unremarkable job and apartment, but she still has a sense of wonder and imagination. Elisa is dreaming of a different, better life.

THE SHAPE OF WATER | "Weakness In Character" Clip | FOX Searchlight

In the outside world, Elisa is marginalised and vulnerable. This is represented by her apartment, squashed above a cinema. The sirens and number of locks on her door suggest she is cautious, guarded, when it comes to the outside world.

They found her- by the river- in the water…

The scars on Elisa’s neck explain her inability to speak, but also hint at a tragic backstory. Visually, they connect with the gills of the amphibian man and connect her bath with her underwater dream.

Her bath also establishes that she is a sexual being before she even meets “the asset.” Again, there’s the key balance of the film: adult sexuality crossed with child-like belief. Elisa has moments of pleasure too. Del Toro and Taylor haven’t constructed her just as a simple, oppressed victim for the audience to pity.

However, this too is timed and kept under control as part of a routine. She doesn’t allow her passions to overrun into the rest of her life. As with the underwater dream, there’s a contrast between her unremarkable outer life and her suppressed, rich inner life, and a hint of loneliness.

The saying on the calendar uses water as a metaphor for the past, highly relevant to Elisa whose past (and therefore future) are unknown. This adds to the fairy tale tone, introducing a sense of destiny.

Elisa looking after her neighbour establishes her generous nature. She has a key to his apartment, indicating intimacy and trust between them.

Again, the script is careful not to paint her as a complete victim of the outside world. She has friends and allies in her life; she isn’t totally isolated or lonely.

Still, she is taking care of Giles’ needs perhaps at the expense of her own.

The strong suit of many Del Toro films is in their production design and world-building. This attention to detail is on the page, too, where small details of description, such as the locks on her door, reveal a lot about Elisa’s character.

There’s a danger of writing oppressed characters in a single mode, defining them entirely by their marginalisation. However, this risks doing a disservice to the characters and the story, rendering them thin and not believable.

THE SHAPE OF WATER is a fantastic example of how to introduce such a character quickly and efficiently but also give them multiple dimensions, including a rich inner life.

1 thought on “GENIUS CHARACTER REVEALS: Elisa (THE SHAPE OF WATER)”