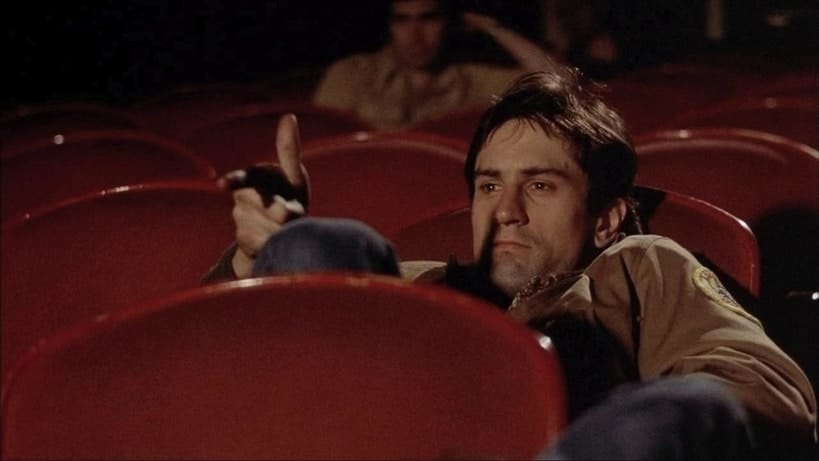 Welcome to Original Characters, an ongoing series of Industrial Scripts’ articles examining the most original characters to appear in both TV and film. This article will focus on Travis Bickle from Taxi Driver.

The seventh in our original characters series will look at one of cinema’s most infamous antiheroes, Travis Bickle from Taxi Driver.

Who is Travis Bickle?

Taxi Driver follows protagonist Travis Bickle, a lonely and unstable veteran turned taxi driver on his journey to vengeance against a society he perceives as filled with violence, crime and corruption.

Through the story and Travis’ character, Taxi Driver outlines the reality of living in a city such as New York. It tampers with the illusion that New York is the city of fame, glamour and idealism. Instead, through Travis Bickle, director Martin Scorsese and screenwriter Paul Schrader offer a scope of the worst of what New York can do to a person. Travis comes to see the city around him as sick and himself as the only one that can save it.

“All the animals come out at night – whores, skunk pussies, buggers, queens, fairies, dopers, junkies, sick, venal. Someday a real rain will come and wash all this scum off the street”

What Makes Travis Bickle Stand Out?

So what makes Travis Bickle so revolutionary? He is a character written into the very fabric of cinematic lore. A character that has influenced many other characters, such as Arthur Fleck in Todd Phillips‘ Joker (2019).

Travis’ character has to be one of the most complex in film history. Through the first-person narration, we are able to sympathise with him. Particularly regarding the fact that he is a product of a society that has failed him deeply. Nonetheless, the complexity arises through the character’s disturbing and unpredictable actions. These make it almost impossible to ever fully identify with Travis.

“From now on there will be 50 pushups each morning, 50 pullups. There will be no more pills, no more bad food, no more destroyers of my body.”

The complexity of Travis’ character continues with the numerous contradictions layered in the narrative. Specifically, we learn that Travis is appalled by the society he lives in and yet he is unable to disconnect from it.

Already, through these contradictions, we are beginning to see how Travis Bickle is not a flat character. He is a multi-dimensional character. The more we delve deeper into the film the more Schrader and Scorsese unravel the layers in his character, and how the struggles with himself are really what define the narrative.

Taxi Driver is a journey through the battle of Travis’ mind. It’s a portrayal of the contradiction between the picture someone paints of themselves and the reality of how they live. In spite of all his flaws, Travis wants to see himself as a hero and as someone on the wrong end of a broken society.

One of the most frustrating aspects to Travis’ character is that we know very little of him. Yes, through the voiceover narration, we are given an insight into his mind. This does well to provide us with a sense of intimacy with Travis, alongside allowing us to sympathise with him. However, we never truly know him or anything about his past.

The benefit of shaping your original character in this way is that it allows him to remain unpredictable and mysterious. This will further shape later events in the narrative.

The only background detail we are given is that he is a veteran. Let’s unpack that a bit.

Similarly, through war, it can be argued that he believes that the only means of fixing things is through violence. This gives context for us to understand why he carries out such extreme actions within the story. He’s a product of his environment and clearly, his experience of war has had a big impact on his psyche.

The Power of the Antihero

One of the most conflicting attributes to Travis Bickle is that is he is neither a hero nor a villain. To put it simply, he is an antihero.

What is an antihero?

So is Travis Bickle an antihero? Well, Travis is no Batman. He is not a perfect hero with moral instincts to save the city. Instead, he is unlikeable, selfish, obsessive and inappropriate.

Moreover, Travis is an extremely delusional character. He believes his actions are heroic, though he doesn’t act consciously. In particular, his actions aren’t really about becoming a hero, but rather to feed his desire for revenge and his desire to feed his ego. We can see this more clearly by looking closer at some key events within the narrative…

Firstly, when Travis is rejected by Betsy, he becomes angry and determined for vengeance. For example, his motives no longer revolve around ‘getting the girl of his dreams’. Instead, he attempts to assassinate Senator Palatine, which makes his overall motives unclear.

Does Travis want revenge on Betsy (Palantine being somewhat viewed as being a parental figure to Betsy)? Or is this simply a political movement?

Nevertheless, the plan fails miserably, demonstrating Travis’ weaknesses. The result of this is that Travis seems to fall into further destruction. Most importantly, this destruction further drives his anger and desire for revenge.

Despite his initial failure, Travis’ frustration is later satisfied thanks to his encounter with Iris, a young sex worker. In particular, he believes that this teenage girl is in need of being saved and liberated from her pimp. Therefore, we see how he channels his initial desire for revenge on Palantine onto Sport (Iris’ pimp).

“Someone should take the city and just… just flush it down the fucking toilet!”

The irony is that despite this saviour complex he inhabits, Iris has no desire to be saved. Travis overlooks this entirely as he submerges completely into his road to vengeance. Travis doesn’t seem to care who he targets. To him, all of society is corrupt and revenge is needed. Therefore, whether that is achieved through power-thirsty political leaders or pimps, he will do whatever is necessary to get back at society and become its saviour.

The movie ends with Travis succeeding in getting what he wants. He defeats Sport and becomes a hero. Arguably, we can see Schrader unravel a critique on the perception of the stereotypical heroes and villains.

Perhaps it is not as black and white as being either good or bad. Perhaps, there is a very fine line between the two.

For instance, if Travis succeeded in assassinating the senator, he would have been a villain. But when he kills the pimp, he is celebrated by the media. As a result, this outlines the complexities within a corrupt society, but also Travis Bickle’s character.

Furthermore, debate continues to this day as to the validity of the ending. Is Travis’ heroism real or a figment of his imagination? Did he die in the shootout or live to see himself heralded for what he did? The ending is ambiguous in this regard, a surreal tone to the final closing shots of the film. Either way, the lines are further blurred as to Travis’ status. Is he a hero to us or a hero just to himself?

The Road to Destruction

Through the ending, we can see that Travis’ loneliness and hatred for society ultimately leads to his own self-destruction.

“Loneliness has followed me my whole life, everywhere. In bars, in cars, in sidewalks, in stores, everywhere. There’s no escape. I’m God’s lonely man”

Martin Scorsese provides a sense of ambiguity regarding the fate of Travis Bickle. Some believe that Travis died and that the ending is simply a delusional fantasy Travis had of becoming a hero.

Others believe that the ending signifies the cyclical nature of the story. The movie ends with Travis back to where he was in the first place – being a taxi driver. He is back to being submerged by loneliness in the midst of a crowded city.

This demonstrates a negative character arc through the fact that his change is negative. Travis achieves his goal in getting back at society, but he is unable to fully escape it. Therefore, this leaves him to continue to spiral in loneliness and constant self-destruction. Travis’ achievement and bliss from heroism is only temporary, and so the cycle begins again.

This makes him one of the most unique and memorable characters in cinema. He is no simple ‘knight in shining armour’. He is unpredictable, complex and compelling. We can’t look away.

This is what makes an original character, someone that challenges the audience and keeps them guessing. We never truly know or understand Travis Bickle, but merely spend a few hours getting glimpses of this complex and beguiling person. Travis is a character whose depth knows no bounds, which is what keeps drawing audiences back to him.

Want to have a go at creating great characters like Travis Bickle from Taxi Driver? Check out our Ultimate Guide to Writing Characters That Fascinate.

This article was written by Lily Waywell and edited by IS staff.