Reddit is an online community made up of smaller, individually themed communities, whether they’re centred around sharing simple images or jokes, posting personal anecdotes and requests for advice, or hosting Q&As with celebrities.

Then, of course, there’s the Reddit screenwriting community, pictured below. 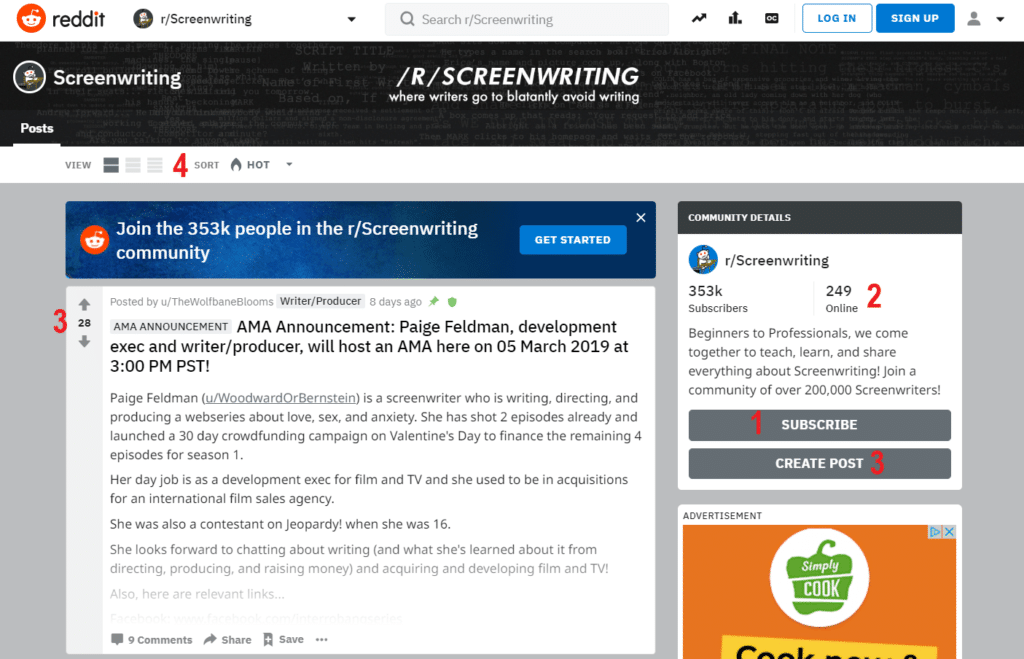 There is a ‘Premium’ option that comes with ‘coins’, although these aren’t worth worrying over, especially for new users.

Users can also vote comments up and down.

Upvotes and downvotes should be given based on usefulness, not agreement.

So if someone on Reddit screenwriting has a perfectly valid opinion – they liked a movie, and you didn’t – that’s not worthy of a downvote. If they’re giving harmful or wrong advice, or being abusive, or breaking the rules, that is. 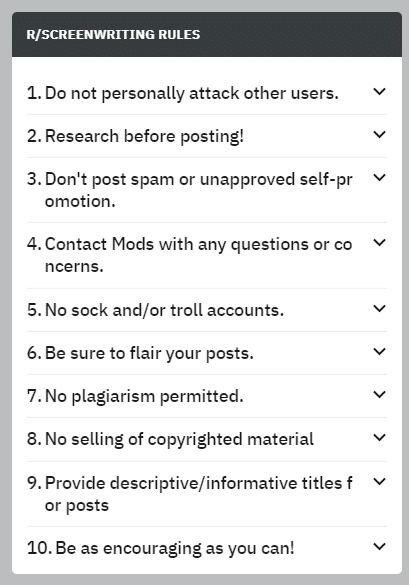 If a comment gets a low enough score, Reddit collapses it and hides it from view. This keeps discussion relevant and helpful:

When comments on Reddit screenwriting are still new, they have their upvote/downvote score hidden. This feature makes it less likely for people to jump on a popular or unpopular comment.

Reddit accounts tend to be anonymous, which has advantages and disadvantages.

On the one hand, you can ask a question without worrying if it’ll be traced back to you.

On the other hand, you don’t know if another user, handing out advice as if they’re an expert, has anything to back up their claims.

However, one valuable feature combating this is is ‘user flair’.

This allows certain users to identify themselves with a few words that accompany their username on every post or comment.

On Reddit screenwriting, moderators give these to professional writers and those already established in the industry:

It’s not to say that other users of Reddit screenwriting have nothing to contribute, or aren’t professional writers themselves. It just adds a layer of legitimacy.

The community is what you make of it, whether an active poster and commentator or the opposite, soaking up others’ posts and comments (a ‘lurker’).

There’s some industry etiquette that normally goes unspoken. For example:

Then there are the occasional Q&As with screenwriters, executives, producers, agents and founders of competitions (in Reddit parlance, called an ‘AMA’ for ‘Ask Me Anything’).

They may not be household names (which screenwriters are?), but if they’ve made writing their career, they’re probably worth listening to.

It’s worth searching through older posts, even though you won’t be able to comment on them.

Here’s one from ARRIVAL and BIRD BOX screenwriter Eric Heisserer.

Users also share their own work and ask for feedback, from initial vague idea form to loglines, outlines and treatments, to finished scripts of various drafts.

These can be useful to read, putting yourself in the position of an agent or production company receiving a submission from a completely unknown writer.

A word of caution: while opinions from fellow aspiring writers can be rewarding, they’re not a substitute for in-depth script coverage and Reddit screenwriting isn’t a place to be discovered.

Many users who ask for feedback are seeking basic encouragement, not actual helpful critiques.

A pro script reader might answer a question or two if they feel like it, but it’s unlikely they’ll take time out out of a busy day to read your script.