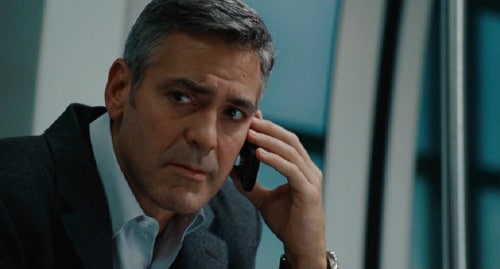 The film: Jason Reitman’s follow up to JUNO, UP IN THE AIR, was a timely look at the fallout from the economic crisis. A witty dramedy equal parts mismatched buddy road movie and rom-com, the film was famous for George Clooney laying himself bare (he plays an avowed bachelor having second thoughts) and a break-out performance from the excellent Anna Kendrick.

The plot: Ryan Bingham (George Clooney) lives the high life in UP IN THE AIR, flying all over the US as a corporate downsizer – telling people face to face that they have been made redundant – and boy, is business booming. Life on the road suits Ryan’s no-strings approach to life; in his 40s, unmarried, aiming for the grand goal of 10 million air miles – he even teaches a motivational seminar in how to cut yourself free from connections that might weigh you down in life. But his job is about to throw a spanner in the works in the shape of peppy rookie Natalie Keener (Anna Kendrick), who thinks firings by video link are the cost-saving future – and Ryan has to take her on the road to show her the ropes. On the way, he meets like-minded Alex (Vera Farmiga), a jet-setting businesswoman who just might offer him the perfec 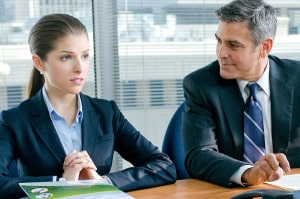 The scene: ‘How Much Did They Pay You to Give Up on Your Dreams’ – Ryan and Natalie fire middle-aged father Bob (JK Simmons) – but Natalie’s cold college intellect fails her as the meeting turns sour. Step up hotshot Ryan Bingham, who manages to convince a man who has just lost his livelihood that this is the exact opportunity he’s been waiting for. Reading deep meaning into a few small details on Bob’s CV – a minor in college, some time waiting tables – he infers that the man once dreamed of being a Chef. “How much did they first pay you to give up on your dreams?”. With that, Ryan manages to talk down an irate man, and proves just why he’s the best at what he does.

Why it’s unheralded: In among Ryan’s musings on marriage and the chemistry with Alex, this scene of professional protocol from UP IN THE AIR isn’t quite so memorable. Understated, but vital to the film…

Why it’s great: The scene skilfully establishes the premise of the picture with a demonstration of Ryan’s very unique talents. His potentially dislikeable position as a firer-for-hire could undermine the audience’s connection with the character and leave the entire film with a feel of ‘so what?’ – but by showcasing his skills, and seeing those skills result in a positive, his characterisation is significantly strengthened in the audience’s eyes. Without this scene in UP IN THE AIR, the whole film could fail. Falsely confident Natalie’s subjective academic take on the world is put to its first objective test as she flames out – score one for Ryan, as he seizes the initiative in their battle over the company’s future. Bob’s 180 degree spin embodies the power of scenes who represent meaningful change – as well as acting as a rallying call to the many watching UP IN THE AIR who would have been in a similar position.

If you enjoyed this article, why not check out our Unheralded Scene: THE FLIGHT OF THE PHOENIX (1965)?