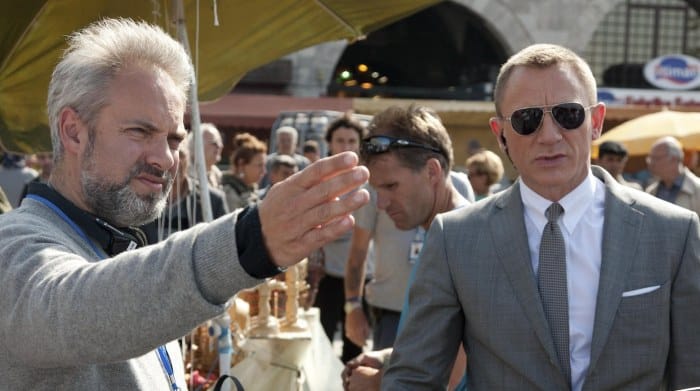 Both an Oscar winner and a blockbuster director, the breadth of Sam Mendes’ work perfectly demonstrates his versatile talent. And the 15 Sam Mendes quotes we’ve picked below illustrate how this versatility comes from a deep understanding of and commitment to craft.

Jumping from genre to genre, his consistency comes from his innate theatricality. This provides his films with strong characters and stories as well as captivating visuals. From American Beauty to Skyfall, it is safe to say that he has created a body of work that will stand the test of time.

So in light of this, we’ve put together 15 fascinating Sam Mendes quotes for a closer perspective on his directorial style and his outlook on the industry.

Sam Mendes – From Stage to Screen

Sam Mendes is equally celebrated in the theatrical world as well as the film world; enjoying a long and successful career as a theater director before making a seamless transition into filmmaking.

Mendes began as an assistant director in 1987 and quickly made his West End debut directing Judi Dench in Chekov’s The Cherry Orchard in 1989. He was appointed as artistic director of the Donmar Warehouse in 1990, where he received great acclaim for his 1993 revival of Cabaret.

Indeed, it was this show that caught the eye of Steven Spielberg which then launched Mendes into his directorial film debut, American Beauty. This 1999 classic amazingly won him a Golden Globe, a Directors Guild of America Award, and the Academy Award for Best Director. This made him the sixth director to earn an Oscar for their feature film debut.

Still, Mendes never lost his attachment to the stage and he carries his experience in the theater into all his films. He works with his actors as if they were rehearsing a play; working for weeks to develop emotional depth and attachment to their characters. Moreover, like a theatrical production, he prefers to have his films shot in-sequence to allow actors to immerse themselves as the film unfolds.

These methods are rare these days due to Hollywood scheduling. However, they have clearly proven very effective and successful for Mendes and have therefore justified themselves.

Sam Mendes – The Bond Years and Beyond

And of course, we can’t talk about Sam Mendes without mentioning James Bond.

In 2012 Mendes took the commercial jump and directed Skyfall (and then Spectre in 2015). However, despite this being his first action-packed blockbuster, Mendes still kept to his roots. He brought a new emotional depth to the franchise; using his focus on character to gently explore Bond’s past and psychology.

Mendes then moved on to screenwriting as well as directing for his next project, the award-winning war drama 1917. The film is known for being shot in one take, which Mendes has said he “baked into the screenplay itself”. He wanted two hours of real time and no cuts, and for the audience to be locked in with the characters. This ends up being an important storytelling decision that frames the emotion and pressure of the narrative and characters, much like a play.

He gained another screenwriting credit with Empire of Light. A romantic drama close to his own personal story, Mendes has once again moved onto a drastically different genre from his work, as is his preference.

It is safe to say that Mendes will always adapt his style to tell the story at hand perfectly while delivering strong characters, powerful narratives, and impressive visuals. He’s a director who has honed his craft subtly over many years and filters his work ethic into the details of the stories he tells.

1. “Learn to say, ‘I don’t know the answer’. It could be the beginning of a very good day’s rehearsal.”

2. “The importance of rehearsal is maybe you want to talk about how the scene’s going to be designed, how it’s going to be staged, all of those things. It’s all about preparation, and deciding what mutually you don’t want to do, rather than necessarily what you do.”

3. “I am not a master-class director, I am not a teacher, I am a coach, I don’t have a methodology. Each actor is different. And on the film set, you have to be next to them all.”

5. “Truly great actors carry their characters in silence with them. They communicate without words the relationships that predate the movie.”

7. “I think movies are a director’s medium in the end. Theater is the actor’s medium. Theater is fast and enjoyable, and truly rewarding. I believe in great live performance.”

8. “For me, certain shots or scenes are keys in the movie.”

9. “There have been screenwriters who I’m sure would gladly kill me, because I’ve been very fast and loose with their work, because I felt like it wasn’t up to my high standards. I would push and pull it on set and make changes all the time. But then when you’re working with an original screenplay, my theater instincts kick in, and I suddenly become very keeper-of-the-words.”

11. “You’ve got to work. You’ve got to want an audience to sit forward in their chairs sometimes, rather than sit back and be bombarded with images.”

12. “Avoid, please, all metaphors of plays or films as ‘pinnacles’ or ‘peaks’; treat with absolute scorn the word ‘definitive’; and if anyone uses the word ‘masterpiece’, they don’t know what they’re doing. The pursuit of perfection is a mug’s game.”

14. “Always choose good collaborators. It seems so obvious, but the best collaborators are the ones who disagree with you. It means they’re passionate, they have opinions, and they’ll only ever say yes if they mean it.”

15. “Learn to accept the blame for everything. If the script was poor, you didn’t work hard enough with the writer – If the actors failed, you failed them – If the sets, the lighting, the poster, the costumes are wrong, you gave them the thumbs-up. So build up your shoulders, they need to be broad.”

Feeling inspired by these Sam Mendes quotes? Take a look at our list of Nora Ephron quotes and Martin McDonagh quotes for some more inspiration.