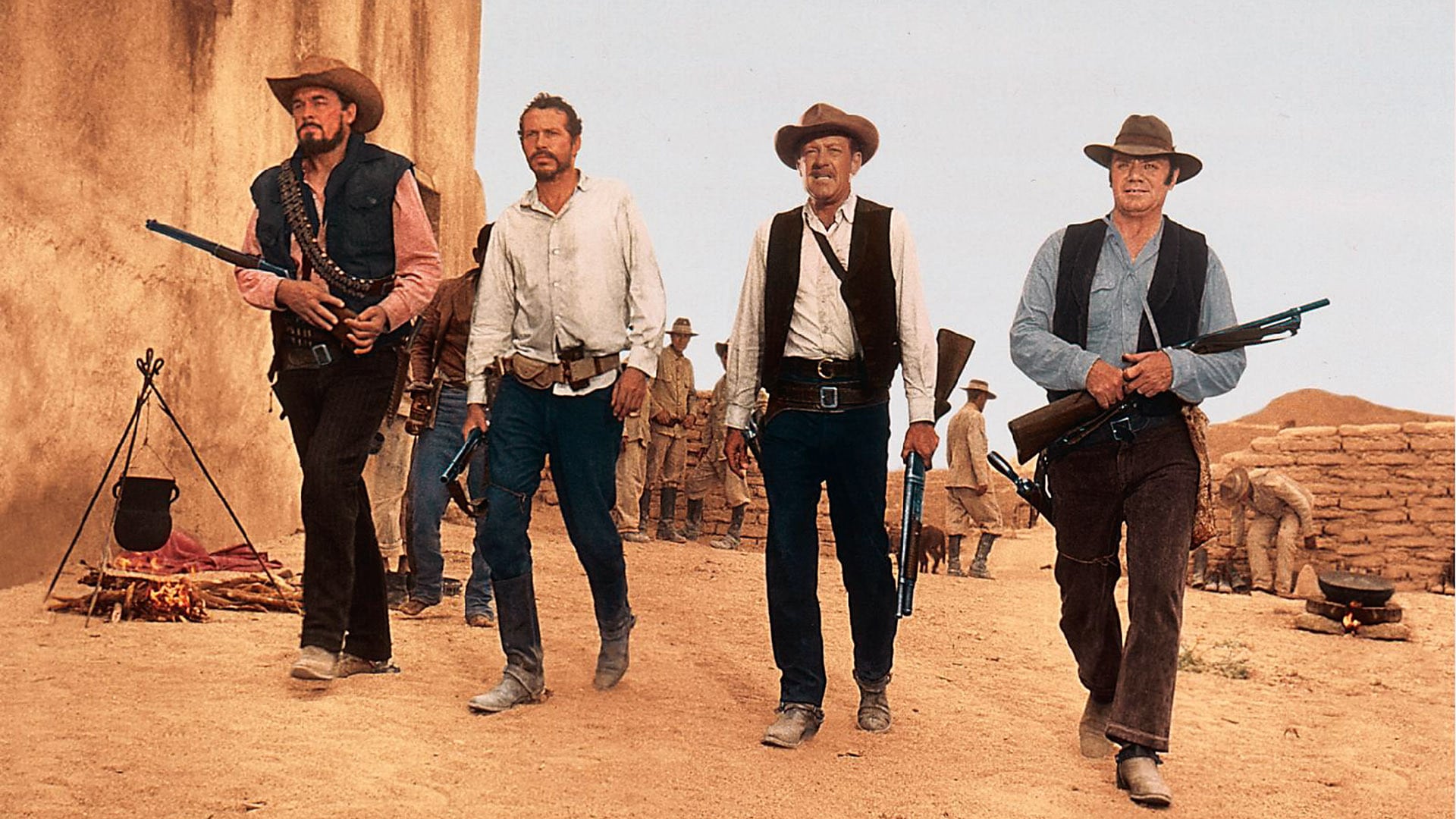 Defiance is a Rule to Live By

Screenwriting often runs the risk of turning into plate-spinning – following narrative rules; trying to appeal to an audience; trying to appeal to a producer; trying to be original; trying to meet genre expectations (but not too much); pandering to multiple outside opinions from industry members, friends, family; listening to the market; maintaining a ‘voice’. It can end up feeling prescriptive, like ticking off a checklist.

western“>Here are fifty quotes from famous names in the industry (and some outside it) highlighting the virtue of a defiant approach in screenwriting (or just… generally).

In defiance of ‘Write what you know’

western“>1. “Everything in life is writeable about if you have the outgoing guts to do it, and the imagination to improvise.” – Sylvia Plath

western“>2. “I think anybody can write about anything. I just never subscribed to the theory that there were certain subject matters that I had to write about.” – Ann Bidermann

In defiance of others’ opinions

western“>3. “Trust your own instinct. Your mistakes might as well be your own, instead of someone else’s.” – Billy Wilder

western“>4. “You don’t need any expert’s permission to write your story, your way.” – Brian Koppelman

western“>5. “Show people your stuff, listen carefully to their responses, but ultimately don’t value anyone’s opinion above your own.” – Alex Garland

western“>6. “I think ‘No’ is a very powerful word in our business that is very hard to use early on in your career… but it did help me…” – Peter Dinklage

western“>7. “I don’t care if a reader hates one of my stories, just as long as he finishes the book.” – Roald Dahl

western“>8. “If you’re creating anything at all, it’s really dangerous to care about what people think.” – Kristen Wiig

western“>9. “I try to just make what I want to make, or what I would want to see.” – Sofia Coppola

western“>10. “Literature is strewn with the wreckage of men who have minded beyond reason the opinions of others.” – Virginia Woolf

western“>11. [on critical reception for ENEMY] “I don’t care. No matter what other people think, it was important for me.” – Denis Villeneuve

On pandering to an audience

western“>12. “…Keep the story and the characters simple rather than letting it all get away from you in an effort to please what is perceived to be an increasingly attention-deprived audience… My general philosophy now more than ever is to give the audience the least possible… I don’t necessarily believe the conventional wisdom that the audience is more restless than ever and always needs more stimulation.” – Vince Gilligan

western“>13. “If you start writing to an audience you’re talking down to them. I’ve never written for any age group, I just write character.” – Melissa Rosenberg

western“>15. “It’s easy to offend people. People get uncomfortable, for instance, when the main character in a movie is not sympathetic in a Hollywood formula way. Our movies are loaded with things that aren’t to everyone’s taste.” – Ethan Coen

In defiance of accepted form

western“>16. “There’s this inherent screenplay structure that everyone seems to be stuck on, this three-act thing. It doesn’t really interest me. To me, it’s kind of like saying, ‘Well, when you do a painting, you always need to have sky here, the person here and the ground here.’ Well, you don’t.” – Charlie Kaufman

western“>17. “I think that a preoccupation with originality of form is more or less a fruitless thing. A truly original person with a truly original mind will not be able to function in the old form and will simply do something different.” – Stanley Kubrick

western“>18. “I can’t allow what we learned in English composition to disrupt the sound and rhythm of the narrative.” – Elmore Leonard

western“>19. “The term ‘genre’ eventually becomes pejorative because you’re referring to something that’s so codified and ritualised that it ceases to have the power and meaning it had when it first started.” – Christopher Nolan

In defiance of preconceptions

western“>21. “If there’s specific resistance to women making movies, I just choose to ignore that as an obstacle for two reasons: I can’t change my gender, and I refuse to stop making movies.” – Katheryn Bigelow

western“>23. “I’m trying to prove stereotypes wrong in general because they are. People are just more complex than they seem to be on the surface. People are surprising and archetypes are not.” – Sarah Treem

western“>24. “I love that as a theme for women: Stop standing by! You’ve got to make stuff happen! You’ve got to create your own world because if you let other people do it, they’re going to just screw you.” – Melissa Rosenberg

western“>26. “Most directors, I discovered, need to be convinced that the screenplay they’re going to direct has something to do with them. And this is a tricky thing if you write screenplays where women have parts that are equal to or greater than the male part. And I thought, ‘Why am I out there looking for directors?’ — because you look at a list of directors, it’s all boys. It certainly was when I started as a screenwriter. So I thought, ‘I’m just gonna become a director and that’ll make it easier.’” – Nora Ephron

In defiance of accepted rules

western“>28. “When I go to the movies, and I have to sit through ten previews of films that look [alike] and tell the whole story, you know that we’ve reached an age of consensus. And consensus is the worst thing for us. We all agree to agree. That’s where we lose it as a culture. We have to move away from that.” – Oliver Stone

western“>29. “Why are so many fictional policemen and doctors mavericks?… Why do all mavericks prove so popular? Largely because that’s how many of us feel at times, too. There is something immensely attractive in living through a character who does obtain revenge, who is proved to have value or… is finally proved right.” – John Yorke

western“>30. “Write your story as it needs to be written. Write it honestly, and tell it as best you can. I’m not sure that there are any other rules.” – Neil Gaiman

western“>31. “I do what I do, and write what I write, without calculating what is worth what and so on. Fortunately, I am not a banker or an accountant. I feel that there is a time when a political statement needs to be made and I make it.” – Arundhati Roy

western“>32. “I’d point out to those of you who are struggling to be independent and to stay independent, that’s the hard part, staying independent, I’d like to remind you that you can be critical.” – Oliver Stone

western“>33. “I steal from every movie ever made.” – Quentin Tarantino

western“>35. “Incompetence has never prevented me from plunging in with enthusiasm.” – Woody Allen

western“>36. “Wake up in the morning and say ‘I refuse to be a hack,’ and see what happens by the end of the day.” – Dan Harmon

western“>37. “’Care’ is often translated as ‘like’, which is why so many screenwriters are given the note (often by non-writing executives) “Can you make them nice?… Yes, of course the audience has to relate to your characters, but they don’t need to approve of them.” – John Yorke

western“>39. “For most people, creativity is a serious business. They forget the telling phrase ‘the play of ideas’ and think that they need to knuckle down and work more. Often, the reverse is true. They need to play.” – Julia Cameron

western“>40. “I’ll rebel against powers and principalities. Always, I will.” – Paul Thomas Anderson

western“>41. “You can win more arguments then you might think as a writer, even though you legally have no recourse, and your script can get muddied and altered in any way possible. You can use reason, logic, and passion to argue persuasively for a case in your favor.” – Shane Black

western“>42. “There are more dilettantes in the [screenwriting] game than real, committed, I’m-gonna-go-down-swinging kinda people. We need more of the latter and less of the former.” – Frank Darabont

western“>43. “Artists need to be outsiders in order to view what’s really going on.” – Paul Haggis

western“>44. “With the pride of the artist, you must blow against the walls of every power that exists the small trumpet of your defiance.” – Norman Mailer

western“>45. “Comedy is defiance. It’s a snort of contempt in the face of fear and anxiety.” – Will Durst

western“>46. “I’ve never been certain whether the moral of the Icarus story should only be, as is generally accepted, ‘don’t try to fly too high’, or whether it might also be thought of as ‘forget the wax and feathers, and do a better job on the wings’.” – Stanley Kubrick

western“>47. “If you’re going to succeed, you’ve got to be like one of those punch-drunk fighters in the old Warner Bros. boxing pictures: too stupid to fall down, you just keep slugging and stay on your feet.” – Frank Darabont

western“>48. “Write every day, line by line, page by page, hour by hour. Do this despite fear. For above all else, beyond imagination and skill, what the world asks of you is courage, courage to risk rejection, ridicule and failure.” – Robert McKee

western“>49. “I never give up on anything, because you come back around, and suddenly the thing you thought you’d never do is relevant.” – Joss Whedon