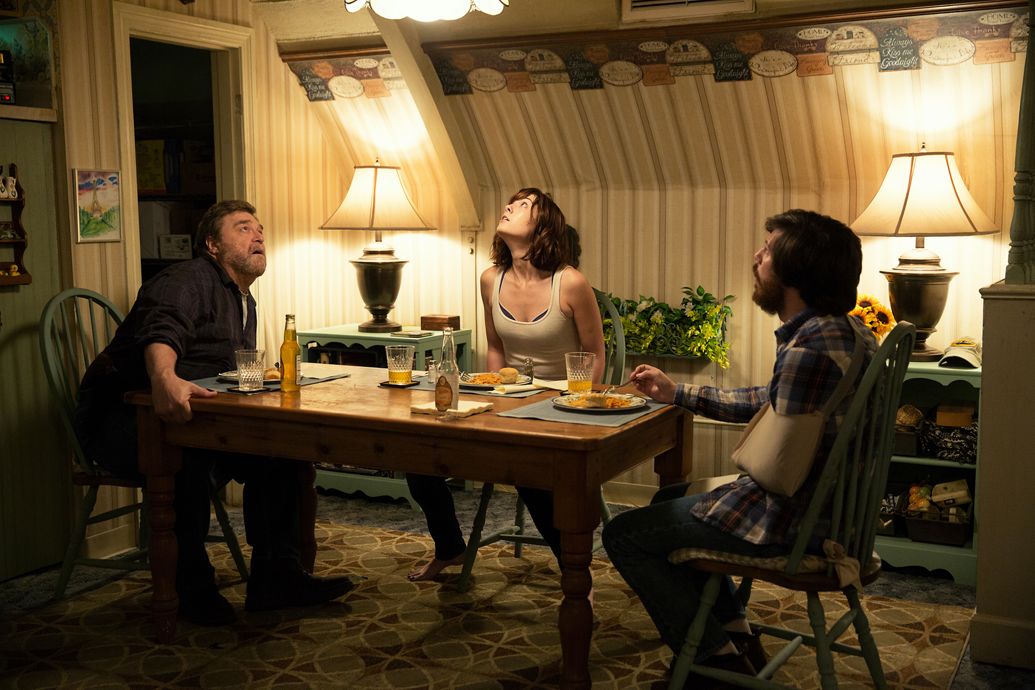 10 CLOVERFIELD LANE is an object lesson in the canny use of scale and stakes.

It’s also a brilliant example of the use of scope, one of the most effective – but often neglected – weapons in the writer’s armoury, especially in horror and sci-fi stories.

In terms of metaphor and allegory, all story by its very nature represents in microcosm the experiences of a particular section of humanity (or all of humanity) because this is from where story engagement derives.

A single-genre comedy, drama or tragedy extrapolates psychology, thoughts, feelings and sensations from the human condition, then distils them till their potency is at the highest level possible.

But there are some stories in which a contained scope adds another level of meaning – and engagement.

In CLOVERFIELD, the scope is already fairly narrow as we follow an ensemble of characters in their attempt to survive an alien invasion.

Compare this with the stakes in a story like INVASION OF THE BODY SNATCHERS or THE HOST, in which the stakes for the key characters are life/death while the stakes for everyone else is a kind of living death in which one’s body survives, but one’s mind does not.

The tonality and themes are immediately different from that of CLOVERFIELD.

Because the mind and/or ‘spirit’ are at stake, these stories are at their best when they are about the mind and the ‘spirit’ and use a cerebral and/or spiritual/romantic tone.

In terms of scale, CLOVERFIELD focuses on New York City, though it eventually becomes clear that the entire world is under attack.

INDEPENDENCE DAY – in story terms a disaster/sci-fi splice –is at the far end of the continuum in terms of scope, stakes and scale.

If the global disaster genre exists at one extreme – it’s a genre in which stakes, scale and scope are at their highest – the personal drama is at the opposite extreme (it’s narrative power, of course, dwells elsewhere).

No matter how high the diffuse stakes, there must always be some kind of immediate stakes. This is from where much of the audience’s engagement will be generated.

In other words, a contained story about an immortal trying to save an entire world, but in which we never engage with any of those people whose lives are at stake, would only work in terms of cerebral – or theological – engagement (and could make for an intellectually-engaging sci-fi story).

The Devil In The Detail

In END OF DAYS, Jericho Cane (Arnold Schwarzenegger) has to save Christine York (Robin Tunney) from the devil.

In LET US PREY, the allusively-named Six arrives in a small Scottish town to reap the souls of sinners.

PRIMER is another benchmark use of contained scope.

10 CLOVERFIELD LANE sets-up its ultra-narrow scope from the outset.

And the writing is brilliantly clever in the way it hooks the protagonist’s outer and inner journeys into this massively-compressed scope.

Once Michelle is captive in Howard’s bunker, the story adds two more characters but retains its contained scope.

The final beat is a truly exceptional piece of writing, artfully fusing together an imminent widening of scope, the final pay-off of Michelle’s career aspirations, the attainment of her inner need (to stop running away) and outer want (to do something meaningful with her life) – though not in a way she ever could have expected.

So next time you re/write a story in the sci-fi, supernatural or fantasy genres, think about stakes (immediate and diffuse – and the interplay between the two), scope and scale – individually and in relation to each other.

It’s a triangle of elements that can provide endless possibilities for both story analysis and story creation.