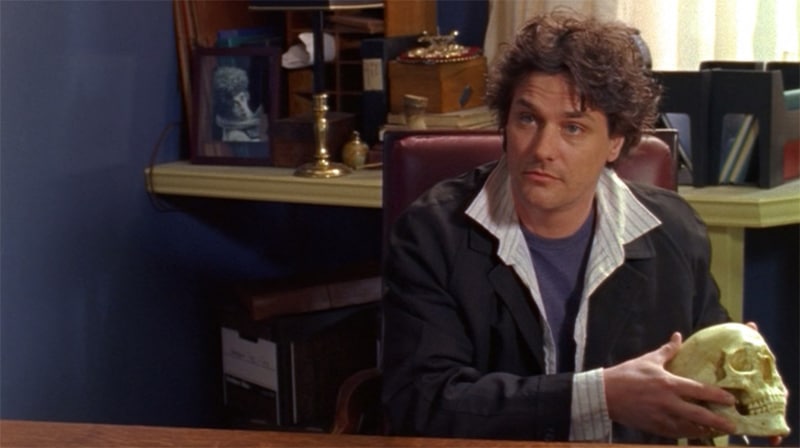 Welcome to the first of our new series: GENIUS CHARACTER REVEALS. In this series we’ll look at scenes and moments where the film or TV screenwriter/director has revealed a great deal of character information in a compressed amount of screen time.

As a courtly bow in the direction of the 400th anniversary of Shakespeare’s death, we start with the brilliantly multi-layered introduction of the key character in Canadian comedy drama SLINGS & ARROWS. Actor-director Geoffrey Tennant (Paul Gross) is introduced in the pre-credit sequence of Season One, Episode One in two scenes which between them last exactly two-and-a-half minutes.

Set at the fictional New Burbage Festival (loosely modelled on the Stratford Festival at Stratford, Ontario) the show (which has a very respectable 9.0 on IMDb) follows an ensemble of actors, directors, managers, sponsors and trustees. It’s gloriously authentic, acidly witty, innately charming and very funny indeed.

There are multiple delights within its three short seasons: a lovely Season One turn from Rachel McAdams (sandwiched between THE HOT CHICK and MEAN GIRLS), an acerbic Statler and Waldorf-style double-act of ancient luvvies (Cyril and Frank), a plethora of gorgeous in-jokes and an enjoyably sophisticated take on the perennial art vs commerce dichotomy. And US TV aficionado Peter Serafinowicz is a big fan.

Who is Geoffrey Tennant?

Drawing inspiration from the apocryphal ‘curse of Hamlet’, Tennant’s backstory goes like this: he created the definitive Hamlet of his generation then promptly had a nervous breakdown. He was directed by Oliver Welles (Stephen Ouimette), now Artistic Director of the New Burbage Festival. Ellen Fanshaw (Martha Burns) – with whom Tennant was romantically entangled – was their Ophelia.

That’s all pertinent, but it’s all revealed later. In the pre-credit character intro we learn that Tennant is an actor and a director – and that he is exceptional at both. He is knowledgeable, naturally funny and verbally witty. He is eccentric and mercurial. He can hold an audience in the palm of his hand. He expects excellence, but is neither pretentious or pompous. He commands respect and loyalty from those that work with him.

How is Tennant’s character revealed by the action and dialogue?

We first meet Tennant at the run-down building that is the base of his theatre company, Théâtre Sans Argent. He is attempting to unblock the toilet – a sure-fine sign that all is not well with either the building or the company – while Cheryl, the company’s administrator, reels-off a list of overdue bills. He tells Cheryl that: “There were no phones in Ancient Greece and their theatres did very well.”

Cheryl tells Tennant that they’re “hanging by a thread”. Tennant’s reply speaks volumes (in both specific and general terms) about character, stakes, drama and, indeed, any artistic endeavour: “And the very best things happen just before the thread snaps.”

Tennant unblocks the toilet. In recognition of this achievement, Cheryl wearily calls him a “genius” – an elegantly subtle and humorous way for the point to be made. Still holding the toilet plunger, Tennant strides into the compact auditorium, where he theatrically proclaims that he has “fixed the toilet” and is warmly applauded by the company.

He then tells those assembled that as a “reward to myself” (a description that is cleverly self-depreciating) he wants to “run the storm”. There’s a nice comic beat as Tennant tells the company that Andy the lighting designer has assured him that there won’t be another fire.

Tennant then raises an arm, and in a completely new tone of voice (serious but not pompous) he asks Andy for the storm. As the lights are adjusted, he proclaims that a theatre doesn’t need phones, “the theatre is an empty space”.

“And as per the 400-year-old stage direction, we begin with a tempestuous noise of thunder and lightning.” Holding the toilet plunger, Tennant immediately pulls us into Act One, Scene One of The Tempest like the brilliant director that he is.

Summoned forth by Tennant’s Prospero-like magic, the empty space now contains three costumed characters – Alonso, Sebastian, Antonio – and a ship’s rope. We are transported to the deck of a storm-tossed ship. The sailors are drenched by crashing waves as they try to keep the ship afloat and themselves alive.

The toilet plunger has literally transformed into Prospero’s staff. The ship is split, “the lights churn and swell like the sea” and… the lights short and go dark. “Ah, nuts” says Tennant in the dark, seemingly resigned to his fate.

And the credit sequence begins with ‘Cheer Up Hamlet’ (a witty song about Hamlet sung by Cyril and Frank).

Cheer up Hamlet Slings and Arrows

What do we learn about Tennant in these scenes?

First, the traits demonstrated by unblocking the toilet: Tennant is happy to get his hands dirty, but also doesn’t have pretensions and isn’t squeamish. Theatre at its rawest is as much about bodily functions as it is about the “higher” functions. Theatre is Rabelaisian and scatological. It exists in a continuum from Aristophanes’s The Birds through Commedia dell’arte to Howard Brenton and Martin McDonagh. Tennant’s successful wrangling of a blocked toilet shows that he innately understands all of this. And that he can master such base matter and with theatre’s alchemy perhaps turn base matter into spiritual nourishment.

Then there is the gorgeous psychological pun: Tennant is, quite literally, blocked. He is stuck. He isn’t fulfilling his potential. The unblocking of the toilet is a symbolic foreshadowing of the psychological unblocking to come.

Then there’s the theatrical pun: blocking is how a director stages the action. Tennant is a master “unblocker” – maybe he will be able to “unblock” the staid, safe, commerce-driven New Burbage Festival. It’s no coincidence that the sequence that follows – in which we’re introduced to Oliver Welles and the cast of his saccharin-sweet A Midsummer Night’s Dream – features Ellen complaining about the lazy and ineffective blocking Welles has given her.

From Tennant’s introduction to the shipwreck scene we learn that he knows his Peter Brook (in addition to his Greek Theatre and, clearly, his Shakespeare.) He is clearly a director who constantly seeks dramatic truth – who has no need for big-budget spectacle and no patience for the inauthentic.

From a few lines of The Tempest we learn that Tennant is both a brilliantly articulate director and a mesmerizingly intense actor.

These two scenes give us a fully-rounded introduction to Tennant’s character. They set-up Tennant’s initial problem (his theatre company will soon have no home) and his deeper problem (he is wasting his talent). They demonstrate his innate theatricality. They foreshadow the fantastical elements of the show: Tennant will soon be haunted by Welles’s ghost, just as Hamlet is haunted by the ghost of his father (Welles is definitely something of a father figure for Tennant; Tennant is conflicted about his relationship with Welles). 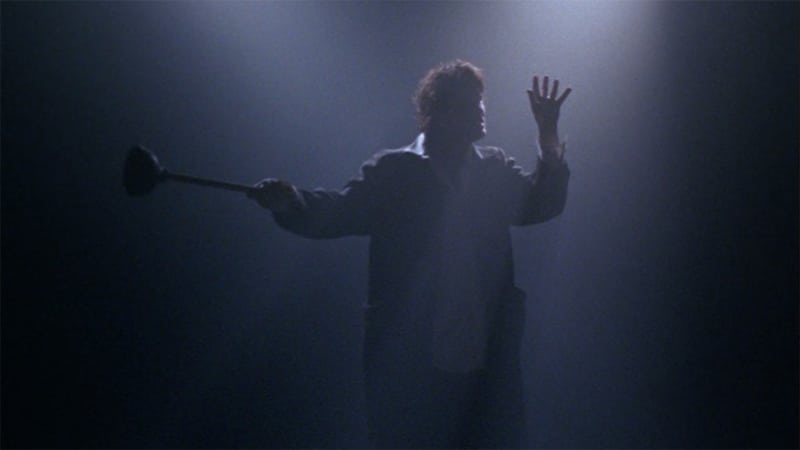 The imagined scene from The Tempest and the transformation of a toilet plunger into Prospero’s staff immediately roots the entire show in the genuinely magical, in a world where imagination (sometimes a fragile attribute) is crucial (theatre’s blessing and its curse).

Quite apart from introducing Tennant, these scenes also establish milieu, genre (comedy drama), tone (by turns dramatic and comedic), subject (the Pyrrhic nature of talent; the Schengenesque border between genius and madness; the raw power of theatre) and themes (art vs commerce; extraordinary flights of imagination vs. the base exigencies of ‘real’ life).

These two scenes also generate intrigue by asking the question: why is this obviously gifted actor-director working with a theatre company that cannot pay its bills in a building that looks like it should be condemned?

If you enjoyed this article, why not check out our article: OPINION: Choosing Your Protagonist?