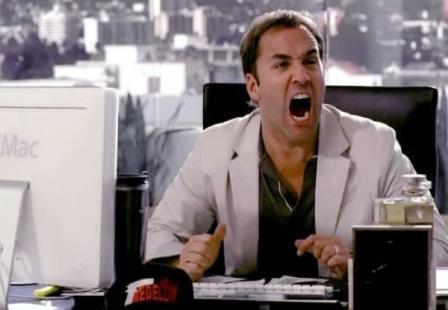 10 Ways to Irritate a Development Executive

When I finally made the transition from being a Development Executive to becoming a writer, I believed that I had a genuine advantage because I had been granted the gift of insight having been on both sides of the plate of Jaffa Cakes. This, I thought, gives me a head start in the race to be Britain’s Most Perfect Screenwriter and to not do that thing that can kill a project in one fell swoop: irritate the Development Executive.

In order to take this crown, I decided to emulate, nay full on impersonate, the person that I had found the easiest writer to work with in all of my experience. It was a chap, so I decided to stick with my own dress sense and way of sitting (legs shut, particularly in a skirt. Well, you’d be surprised!) but, other than that, I was going to behave exactly as he did in a meeting. He took all notes on the chin, his face never reading frustration or irritation, he wrote everything down and chose to open a measured discussion on the point only if he disagreed on seeing it in print, when he did dispute a suggestion, it was never in anger which calmly resolved it, then he went away, did the work, delivered on time and it was always good. Is it any surprise that he’s so successful on both sides of the pond?

The problem for me was that now, to be like him, I was not only having to be a competent and alert writer in the meetings, I was also having to call upon my skills as a first class actress to boot and, well, quite frankly it was too much to ask. Eventually, I imploded on receiving a note I absolutely detested, my carefully constructed facade collapsed as if I’d got my stiletto caught in a grate and tumbled into the baked bean display and my true colours, as Madonna, rightly warbled, came shining through.

I have a new schtick I’m trying now as the Gossipy Bitch who holds her hand conspiratorially to her face and whispers, “Entre nous” camply before dishing the dirt. For all of the other tips I can give you, I must defer to my Other Self. My Past. My Infinite Experience as to How Not To Irritate A Development Exec. Or if you’d like to look at it another way, How Not To Be Me Now. If only I could learn from my own mistakes.

1. SMILE. Meetings are not always that fun for you writers. We know that. We know that you have torn your own guts out and stapled your inner most thoughts into Final Draft. You have probably not slept, you’ve beaten yourself up about the quality, worried about your competitors, concerned yourself that someone else has had your idea, then finally, reaching deadline, found the drive and power from deep within yourself to press send on your beloved baby. Only to have us, mere days later, invite you in to point out all the things you did wrong in the smuggest, most obvious way possible. This aside, try to go in with a smile, the vain hope of a free lunch out of this painful experience and the vaguest of possibilities that, if you can pull this off, we could be at the Oscars. Together. In two to five years. And then you can do an M. Night Shyamalan and choose never to have to take notes again. If you’re stupid.

2. DITCH THE FANCLUB. Try not to say, “My mum thinks it’s brilliant”, “My girlfriend loved that bit” or “My therapist told me to use that”. Your mum has to love you, your girlfriend just wants you to shut up so she can watch Modern Family and your therapist is being paid. By you. Give a little.

3. THIS ISN’T GEORDIE SHORE. Also avoid, “But that’s how it happened in real life”. There’s a reason that Endemol hasn’t approached any of us to Truman Show our entire lives and that’s because, largely, they need work, narratively speaking. Just a flex here, a tweak there, or a whole third act usually if you’re still alive.

4. DODGE THE ICONIC COMPARISONS. Whilst we’re on it, see also, “That’s not how it happened in Swingers” (or any other film you think you’re on a par with writing but are actually in perilous danger of a libel suit from). If this really was what happened in Swingers, then you would be Jon Favreau and I would be wearing a freebie Iron Man baseball jacket and trying to take a selfie without you noticing you’re in it. Since you’re not, we’re going to be arguing for ages.

5. BEWARE YOUR QUIET REBEL. Don’t agree with everything in the room and then go home and secretly write something completely different, omitting to star your changes so that we originate a complex game of “What Could Possibly Be New” and, by doing so, chop out some of the only things that were bloody perfect in the first place. If you change your mind, come in again!

6. STICK TO THE RULES. Please don’t fiddle around with the margin and font sizes as if your Executive is not familiar with industry standards and will be completely fooled by the fact that you’ve failed to make any of the cuts but have also managed to write thirty new pages and kept it all under 100 pages. They slag you off when you can’t hear. That’s what happens.

7. PAGE LENGTHS LIKE GREAT WALL O’CHINA. Oh go on then. Since we’re on length. You know the page a minute rule. I know you do. So why oh why are you handing in the script to the 720 hour experimental Swedish film Ambiencé  and squeaking nervously, “I had a little trouble keeping the length down”. Because guess what? I’m going to have a little trouble commissioning you ever again.

8. DIRK DIGGLER. Don’t be cocky. Let everyone else tell you you’re brilliant. Pride comes before a fall, which is terribly public in this industry. You’ve seen the bit about me becoming a Gossipy Bitch. Guess what my favourite subject is? I’m sure you’re marvellous but the best way to show that is in script form.

9.  I’LL GET ME COAT. Do come to a meeting with an ending to your story if you’re pitching because “And then madness ensues” doth not a Third Act make. “Shut the door on the way out” does, however, but in our story, not yours.

10. DETAILS. And finally, don’t be late, don’t be rude to the runner, don’t pull faces you think we can’t see, do be honest, don’t struggle if it really hurts, ask for help, enjoy your work, share the love. Because whichever side of the contract I am, I have to say I’ve felt very lucky to be part of this business we call show even if I’ve spent most of it irritated, bitching or failing. That’s the fun part, believe me!

If you enjoyed this article, why not check out our article containing 10 Hollywood Screenwriters Reveal Their Big Break?

3 thoughts on “10 Ways To Irritate a Development Executive”