The film: Savaged slightly on its release, many critics felt that Terry Gilliam’s take on the late, great Hunter S. Thompson’s seminal tale was too psychedelic, loose and meandering by half to merit any real praise. It’s since gained something of a cult following, however, helped in no small part by the curiosity value in a film where you can see 2 actors of major international stature doing completely out-there, bizarre things. 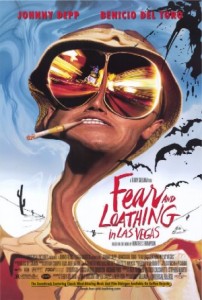 The plot: An adaptation of Hunter S. Thompson’s novel of the same name. The film details a whacky search for the “American Dream”, by Thompson and his crazed, Samoan lawyer. Fueled by the massive amount of drugs they purchased with an advance from a magazine to cover a sporting event in Vegas; they set off on the road. Encountering police, reporters, gamblers, racers, and hitchhikers; they search for some undefinable thing know only as the “American Dream” and find fear, loathing and hilarious adventures in the dementia of the modern American West.

The scene: Not one of the more famous or outrageous scenes in the film – the pair’s trip to Bazooko’s Circus and their destruction of their hotel room(s) later on are two headliners – this is a classic nonetheless. Depp and Del Toro are already pretty high when they get into the elevator, which happens to contain a not-harsh-on-the-eye news anchor played by Cameron Diaz. And what happens next is, frankly, anyone’s guess. Del Toro, paranoia beginning to infest every inch of his being, believes he’s been slighted by one of the news crew, and whilst rambling incohrently decides to pull a knife. Depp stands there innocently while Del Toro threatens the other inhabitants of the lift, while simultaneously falling for Diaz (and his torment at her lack of interest in him results in him tearing up their hotel room some time afterwards). “She understood, man”, he wails later on, pleading with Depp to electrocute him by throwing a tape recorder into his bathtub! To get you in the mood, here is some dialogue from the scene:

TV Anchor: (friendly) You must be a rider…

Dr Gonzo: What the fu*k do you mean?

TV Anchor: What do you ride? See, we’re here getting a little footage on the race for-a television series. I thought maybe, um, we could use you.

TV crewmember: (under his breath) Bullsh*t.

TV crewmember: (under his breath) Bullsh*t.

Dr Gonzo: I think there’s some kind of ignorant, chicken sh*t…move over, man…an ignorant chicken-fu*ker in this town…

Why it’s unheralded: In a film riddled with pyrotechnic, technicolour scenes of bizarre and original imagery, brilliant one-liners (“did they pay you to screw that bear?” Del Toro asks a woman, after Depp has conned him into thinking she had relations with a polar bear) this relatively tame scene aesthetically-speaking was always struggling to stand out.

Why it’s great: The beauty of the scene is that it makes very little sense. And why is that a great thing? Because in the current economic climate there wouldn’t be a hope in hell of this scene getting past a studio executive: the dialogue is more or less incomprehensible, it shows the protagonists in a horrible light, and it doesn’t really kick the narrative forward in any meaningful way. It violates many of the so-called rules of screen storytelling. However what it does do with searing brilliance is reinforce what we already know about our “heroes” – that they’re totally unhinged, that one is slightly more together than the other (which isn’t saying much), and ultimately that they are totally incapable of functioning in-sync with the rest of normal society. And it’s brilliant for it.

You can watch the scene in full, here. Enjoy.

If you enjoyed this article, why not check out our Unheralded Scene: BOILER ROOM (2000)?