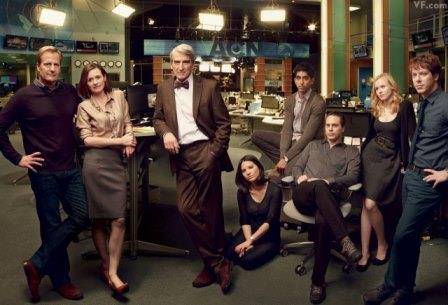 (and, by extension, The Newsroom

1. Humbug to the naysayers.  So it’s not quite The West Wing, but it was smart and funny and it looked good and it made you think and there is no disgrace in striving and coming up short (see ‘ambition’, below).

2. It did however suffer from the by-now familiar penultimate-episode-is-the-best-episode syndrome.  In “Oh Shenandoah” Sloan Sabbith called out the ACNgage app guy live on air, which becomes an instant Top 10 Sorkin moment (see soon-to-be-written post, Tom’s Top 10 Sorkin Moments).  The Will-in-his-cells scenes developed genuine poignancy, SPOILER Jim and Maggie kissed and SPOILER Charlie died.  Hard to beat that.  See also SPOILERS penultimate eps of Fargo (“A Fox, A Rabbit and A Cabbage” – the bit in the lift, the red BMW, Linda going into the office…), True Detective (“After You’ve Gone” – Cohle’s lock-up, the killer is revealed) and the ante-penultimate ep of Breaking Bad (“Ozymandias” – adios Hank).  The West Wing actually suffered from penultimate-season-is-the-best-season syndrome, but of course by then Sorkin was long gone (probably already working on The Newsroom).  The lesson here is tension is great, pay-off is always going to be something of a let-down.  So keep ratcheting.

3. The final episode showcased some traditional Sorkin tropes – ripe emotional cheese, in scene / over scene music, teary funeral speeches (not in Latin this time), the anticipated pay-off to the romcom plot, a nice little fuck-you to Pruitt and citizen journalism, and happy endings all round.  But you know what, it gave me what I wanted.

4. The series as a whole responded to criticism of (particularly) the first season and its ‘smug’ trick of making real news stories central to their plots, by (a) coming up with fictional news stories instead (good old Kundu) and (b) keeping real events (Boston, Snowden etc) in the background.  I have to say I never really bought the smug allegations – I’m with Sorkin in thinking that it just added verité to proceedings – but I also think (as he did) that they found the right balance by the end.  (For what it’s worth, I generally preferred the responding-to-real-events sequences than the I-don’t-buy-this plots of Genoa and Kundu.  But I can understand why it pissed off journalists, and their mates who write the TV reviews.)

5. A six episode final season showed a good understanding of how much juice they had left in the tank.  Your show should be as long as it needs to be (ideal world).  It transpires that “What Kind of Day Has It Been” is not only the title of the finale to The Newsroom S3, it is also the title of the S1 finales of The West Wing, Sports Night and Studio 60 on the Sunset Strip.  Props to Sorkin for holding back that title this time around.  He knew where he was going.

6. It’s all about binging.  My wife and I watched the whole of season 3 in five consecutive week nights (weekends are for movies, and revelry).  I don’t mind missing the water cooler factor these days.  I don’t have a water cooler.  What I do mind is not having another episode to watch RIGHT AWAY.

7. And it’s also all about the cast.  I can’t believe Jeff Daniels hopped from this to Dumb and Dumber To.  He’s a cheesemonger but he played it straight and I love him for it (just watch him holding the little boy’s hand at the funeral).  Mortimer, Patel, Sadoski (a revelation), Pill, Gallagher Jr, Waterston, Munn all simply a joy to watch every second they’re on the screen.

8. Another Sorkin trick.  The West Wing and The Newsroom – and Fargo and True Detective for that matter – all have title sequences with visuals and especially music that I ADORE.  It’s so important.  It sets the tone, welcomes me home, eases me in while I sort out the cushion configuration on my sofa.  Ignore this at your peril.  It’s like the one-sheet for a movie.  Do you know your own show?  Do you know who is watching it?

9. My final point is a common gripe, and not a particularly constructive one, and I don’t want to bang on about it.  But it has to be said that even running at 75% power, a show like this seems light years above and beyond pretty much everything coming out of the UK at the moment.  Sherlock, Wolf Hall and some of the dark cop thrillers may be the exceptions, but it’s hard to compare like for like in those cases. All the old arguments for why this might be are valid, but in my view the two most pertinent are (a) lack of a sizeable enough audience to demand and therefore to justify this level and scale of quality programming and (b) a corresponding lack of ambition in broadcasters.  Is there a solution?  Yes.  Try harder.  Reach for the stars.  Tilt at windmills, if you need to.  My wife and I watched the last two eps of The Newsroom on our Sky Planner instead of the latest (live) episode of the increasingly unhinged Broadchurch. There was simply no contest.  The Newsroom had followed Fargo, True Detective, and Breaking Bad of course.  Next up is Olive Kitteridge, then maybe a bit of Spiral, then we might give Fortitude a try (although hopes aren’t high), then we’re into House of Cards and Better Call Saul on Netflix and Transparent on Amazon Prime. Then The Affair, when someone decides to show it over here.  Indian Summers?  Critical? Partners in Crime?  We’ll see. Any other recommendations? Please?  Please?  (Fade to echo.)

Tom Williams was a development executive for Fine Line Features and is now, thankfully, a full-time professional screenwriter (Chalet Girl, BASE, Kajaki).   He is represented by United Agents.  No he will not read your fu*king script, Industrial Scripts already do that and do it well. You can follow Tom on Twitter, check out his website and IMDb profile, read old posts on his blog and tell him where to go in the comments box below…

If you enjoyed this article, why not check out our article containing 5 Bits of Famous Writing Advice You Should Ignore?