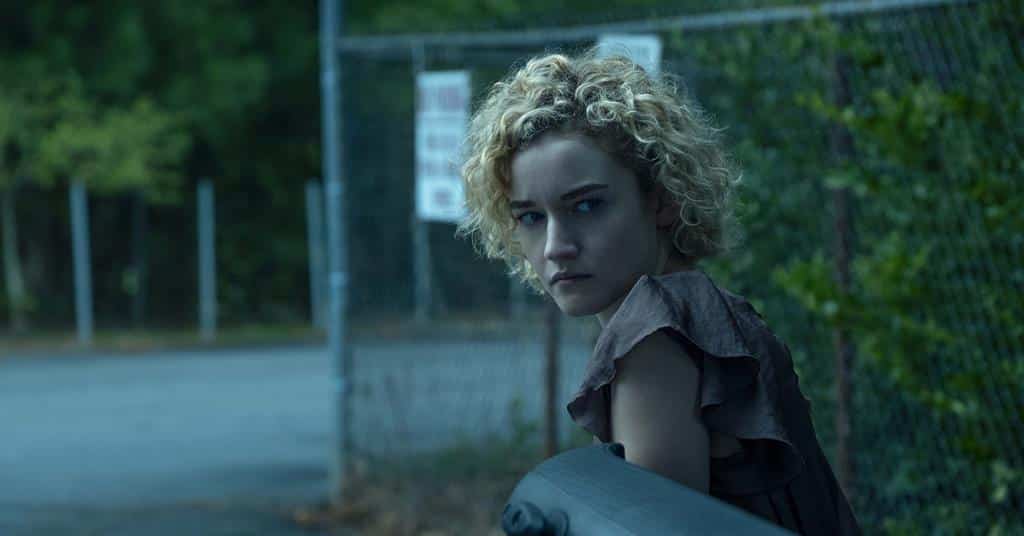 Welcome to Original Characters, an ongoing series of Industrial Scripts’ articles examining the most original characters to appear in both TV and film. This article will focus on Ruth Langmore from Ozark.

“Not the same as anything or anyone else and therefore special and interesting.”

– from The Cambridge English Dictionary

Great characters are at the very heart of great screenwriting and original characters can help to elevate great to superlative.

They may be plucked from real life or an amalgamation of real people. Or they might just simply be a genius stroke of creativity. Either way, these are original characters…

The twentieth of our original characters series will look at Ruth Langmore from Ozark.

Who is Ruth Langmore?

Ruth Langmore is part of the Langmore clan, a notorious local family in the Ozarks, who live right next to the lake in a trailer compound.

When we first meet her in season one, she is nineteen. And she’s the only female member of the Langmore clan, living with her uncles Russ and Boyd and her cousins Wyatt and Three. She grew up in the family trailer compound, largely raised by her uncles after her mother was killed when she was eight-years-old and her father, Cade, was incarcerated.

Whilst she grows and progresses a lot throughout the series, when we first meet her she’s already the spiky and impressive character she comes to be defined as. She dominates her uncles and encourages her cousins to not follow the well-worn family path of crime, highlighting the importance of education, for example.

Ruth is immediately a character the audience warms to because of the way she stands out amongst her family. She’s a leader, despite her age, and she’s wily enough to wriggle her way out of difficult situations. This will develop as the series progresses, but as soon as we first meet her – as she’s cleaning a hotel pool – we can sense she’s someone who won’t take anything lying down.

Ultimately, Ruth goes from entrepreneurial worker to running a large, successful business on her own terms. It’s a remarkable rise and one that most tangibly represents the effect that Marty Byrde has on the Ozarks upon his arrival. Marty channels Ruth’s potential and she clearly benefits from this. However, ultimately, Ruth is undone by her relationship with Marty. Would she have been better off if he’d never come into her life? Given her ultimate fate, it feels hard not to answer that question affirmatively.

So why is Ruth Langmore an original character? Well, she’s a character who constantly keeps the audience on their toes. She’s someone who almost doesn’t know herself as much as the audience does. She’s growing in real-time and is often not exactly in tune with her thoughts and emotions.

That’s not to say she isn’t calculated, because she is. But it often feels as if her instincts are one step ahead of her, guiding her into taking decisive action.

This is typically what leads to her blowing off the handle or finding herself in perilous situations. And this makes for compelling viewing. We always sense she’s a character who will make concrete choices. She won’t sit on the fence but will instead do what she feels is right or necessary. This will regularly plunge her into high-stakes situations, ones which will inevitably have consequences. And this is, tragically, what leads to her ultimate downfall.

Furthermore, Ruth is someone who is fighting against the constraints of her family background but is also deeply attached to this background. Yes, she wants to break free of the “Langmore curse”, as she puts it. But she also cares deeply about her cousins and her home. She might want more for herself and her kin but she’s not ready to completely leave everything behind.

In this sense, she’s someone torn between her head and heart. And she’s totally original in the way she throws herself and the story into constantly new and exciting territory.

Ruth Langmore and the Langmores

This complicated family dynamic is part of what makes Ruth such an original character. She cares deeply for her family and will do almost anything to protect them. But she’s also in constant conflict with them, particularly when it comes to her ambition.

In many ways, her relationship with her family can be summed up by the fact that she never actually leaves the family compound. Whilst she may grate against her family, she never explicitly demonstrates a desire to leave. Instead, she is the lone survivor, as all the others leave (either by her own hands or others). She stands isolated by her ambition and rise. Three is the only one who seemingly manages to escape the so-called “Langmore curse”, with Ruth eventually paying the price for her actions.

Ruth’s family story is ultimately steeped in tragedy. She’s so committed, for example, to what she’s working on with Marty Byrde that she’s ready to kill her uncles for it. Whilst her relationship with her father is both devoted and conflicting. She still defers to him as a daughter. However, when he threatens to jeopardise her rise, she doesn’t let him get in her way. This relationship, in particular, is a perfect example of Ruth’s fundamental dilemma – the clashing of her attempt to leave her family behind and her devotion to them.

Ruth and Marty Byrde’s relationship is inextricable from the series overall. From the moment Marty comes into Ruth’s life, it’s clear she sees him as a vessel for her ambition. And, as mentioned, above, she’s prepared to even sacrifice her family for her business relationship with Marty and the opportunities it brings her.

However, this simple ambition belies the complexity at the heart of Ruth and Marty’s relationship. Marty and Ruth’s partnership undergoes many ups and downs throughout the course of the series. Marty trusts Ruth and this is what leads her to climb the ladder within his businesses. However, this trust is tested on numerous occasions.

Despite this though, we always sense that Marty wants to pull through for Ruth. Can the same be said for Ruth? Well, she seems to oscillate between wanting to screw Marty over and prove loyalty to him.

Ruth’s attitude towards Marty is another example of how her instincts often lead her, for better or worse. Right from the off she can sense he’s someone who will benefit her and her ambition. But she also often grates and fights back against his control. Ruth never truly trusts Marty and often her way of showing this is by fighting back against him.

Marty is arguably Ruth’s ultimate defining relationship in the series. He’s the one that pulls her out of cheap scams and into running a successful business. However, in bumping up against him, Ruth often demonstrates the distrust she has not just for him but for those in the respectable business world he seems to be a part of.

Their arc is a kind of love story; one where the two characters’ admiration and respect for each other can waver but ultimately always seems to be present under the surface.

Ruth’s romantic relationship with Ben Davis, Wendy’s brother, most obviously brings out a different side to Ruth, a side we don’t see with anyone else.

Simply put, we see a soft and loving part of Ruth. Ben opens Ruth up, encouraging her to be vulnerable with him. It doesn’t happen straight away. In fact, Ben needs to gain Ruth’s trust in order to open her up a little bit. Ben shows just how closed off Ruth can be. Obviously, we’ve always known it to some degree. But the contrast when Ruth does open up is marked, and therefore, shows us just how much of a mask she had been wearing previously.

Ben is not the only character we see Ruth laugh with. She does, after all, have a jovial and loving relationship with her cousin Wyatt, in particular. However, Ben is the only person we see Ruth be truly vulnerable with. This vulnerability though, in turn, leads Ruth into more anger than she could have possibly imagined, when Ben is murdered. And this, in a way, justifies how previously closed off she was.

Ruth’s relationship with Ben illustrates the vulnerability one opens themselves up to when in love. She resists initially perhaps because she only knows too well how it’s likely to end up. And she’s proved right in this respect. Ben is vital though in showing us a side of Ruth she wouldn’t show to anyone else.

This shows how in characterisation, a variety of relationships are essential in portraying the full extent of the character at hand. Different relationships should bring out different sides to a character, helping us, as the audience, to get a full three-dimensional picture of this person. Ben opens up a side of Ruth (both to us and herself) that we wouldn’t see otherwise.

A Compelling and Unique Presence

Julia Garner‘s performance is obviously a big factor in just how much of an absorbing figure Ruth Langmore is. She’s a magnetic presence throughout the series, compelling us with her energy, dynamism and often unpredictable actions and behaviour.

She can lurch from quiet and calculating to fiery and explosive, typically without warning. Moreover, she won’t take shit from anyone, which usually leads to spiralling conflict. Ruth constantly surpasses expectations, expectations because of her background, gender and even stature. In a world full of macho enforcers, she’s typically the most terrifying and authoritative presence in the room.

Most of all though, Ruth Langmore is an original character because of the way in which her background clashes with her ambition and the way her head clashes with her heart. She’s constantly wrestling with this dichotomy. And ultimately, it arguably proves to be her downfall. She’s driven by passion and fierce defence of those that she loves. Many times she puts this on the back burner in service of the sensible thing to do for furthering her career ambition. But over time, this builds to breaking point.

Ruth Langmore’s originality stems from the figure she cuts within the series and the environment of the story world. She’s a route into the Ozarks for Marty, whilst Marty is a route out of the Ozarks for Ruth. She’s a survivor, right up until the last; someone who exceeds the expectations foisted upon her by her family and society.