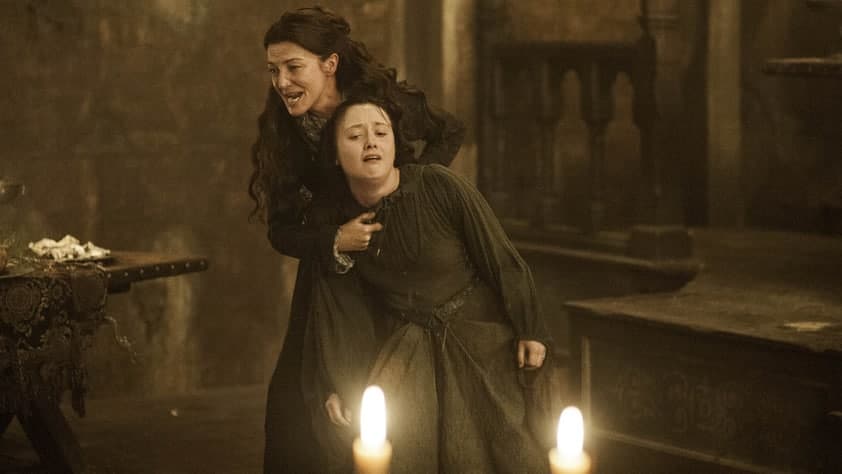 Understanding what makes great scenes really great is very useful when writing a screenplay. It gives you the tools and knowledge to write your own. In this article we are going to analyse and discuss the iconic scene ‘The Red Wedding’ in Game of Thrones, Season 3 Episode 9 ‘The Rains of Castamere’.

The Importance of The Red Wedding

The Red Wedding is one of the most popular scenes in TV history. Its traumatising content is unforgettable. But it also challenges everything we think we know about screenwriting.

Game of Thrones, as we know, is famous for its brutality and unpredictability. As audiences, we have been conditioned to understand storytelling in a way that means the conflict usually remains centre until the end of the story. A good example of this is The Lord of the Rings, where the central conflict is The One Ring that has to be destroyed.

The Red Wedding is very significant to the overall narrative. The narrative so far is primarily divided into three plots;

However, the central conflict is prominently the Starks vs. the Lannisters and their pursuit of the throne. The Red Wedding is important to Game of Thrones overall as it subverts many traditional expectations of storytelling. This manipulation of the stereotypical storyline gave Game of Thrones its reputation as one of the best TV shows ever written. Most shows don’t abandon their central conflict without giving it a resolution that is satisfying to the audience.

To subversively write though, the outcome of your story must not be something the audience would conventionally expect to happen.

”(After Ned’s death) The next predictable thing is to think his eldest son will rise up and avenge his father. And everybody is going to expect that.”

The Setup of The Red Wedding

Setting up your scene is essential to how it will turn out.

Throughout the episode of ‘The Rains of Castamere’, everything in the storyline of Robb Stark seems to be going well.

Seems too good to be true, right?

‘The wine will flow red… and the music will play loud, and we’ll put this mess behind us.”

Although, it is evident that Robb has made a few mistakes over the course of his development. Robb is in this situation with Walder Frey because he betrayed the promise he made to him. Understanding this context, that Robb puts love before politics, is why the subversion works in the fatal scene of The Red Wedding.

The consequences of Robb’s actions have been underestimated. We typically expect the narrative trope that the good and righteous son will avenge his father. Not here.

Forms of the Setup

Everything is flowing. The writer knows the effect this scene will have on its viewers and manipulates their emotions by creating a sense of hope and security. The setup is what makes the events of this scene truly powerful in their message that honour is not superior in regards to survival.

Small Moments of Disclosure: How We Know Something is Wrong

Screenwriters don’t just include things for nothing. The small moments, characteristics and dialogues that seem interesting or suspicious are important to the plot. Visual storytelling and cinematic language are useful when writing these small moments. And they play a crucial part in The Red Wedding scene.

These moments of disclosure amplify the tension and make way for the climax of the scene. There is always danger underneath the setup.

The Shift From a Happy Wedding to The Red Wedding

The clues tie together and it is clear that something is going on. The energy of the scene changes completely and the setup does not prepare us for the horror that is to come. The attacks are sudden and brutal. This is where the scene breaks. It’s jarring but effectively so.

Changes in Pace, How Slowing it Down Puts Us on Edge

The chaos of the scene slows down slightly to put us on edge even more.

The character arcs and developments in Game of Thrones are in-depth and complex. Typically, if we have an attachment and share a moral position with a character, we want them to succeed.

Considering how devastating and frustrating The Red Wedding is because we were all rooting for Robb, scenes like this are always logical for another storyline or character development. Where one character loses, another wins.

As the murders were set up and planned by the Lannisters, they will benefit greatly from these deaths and it will be easier for them to keep the throne. This is a strong cause to effect. Though they are perceived to be the antagonists, this is not a story where the protagonist always wins, like in most.

Considering Robb’s character and his positive qualities, it is fair to say that most wanted him to succeed in his goals throughout the series.

But, Game of Thrones is not a typical story.

Killing Robb marks a new stage of storytelling for Game of Thrones. Our ideas of what was to come in the narrative are killed and our establishment and relation to the characters will change and develop as a consequence.

Catelyn is essential to The Red Wedding because she also represents the values of the Stark family. Furthermore, she reflects the audience as she slowly figures out what is happening just as we do. Her emotion and pain is an attempt at the resolution that we want, for Robb to survive.

She’s the closest thing we have to an avatar in this scene. She makes the first discovery that something is up, watches it all unfold, briefly tries to take control and eventually, is the last to be killed. This mirrors our emotional journey in the scene. We discover, are shocked, hold onto one last thread of hope and then finally, are killed.

The Red Wedding confirms Walder Frey’s character as a deceitful and jealous man. His power and control in this scene is difficult to watch, but his point is compelling.

Walder Frey represents the idea that sometimes the bad guys win. He’s a character with little redeeming qualities and we can hardly watch as he takes charge and gets his revenge. This will eventually be resolved later in the series. But for now, we find pain in watching the bad guy triumph over some of our favourite characters.

What Makes The Red Wedding so Memorable?

The Red Wedding is so memorable for a number of reasons.

The Red Wedding stands out as the moment in Game of Thrones where it truly does the unexpected. It goes against traditional notions of storytelling by brutally and suddenly killing the characters we love. However, it also manages to do this in a way that is subtly built up to and doesn’t strike as an easy sudden twist. Consider this when writing your own story, how can you truly provide the audience with the unexpected?

This article was written by Daisy Hirst and edited by IS Staff.