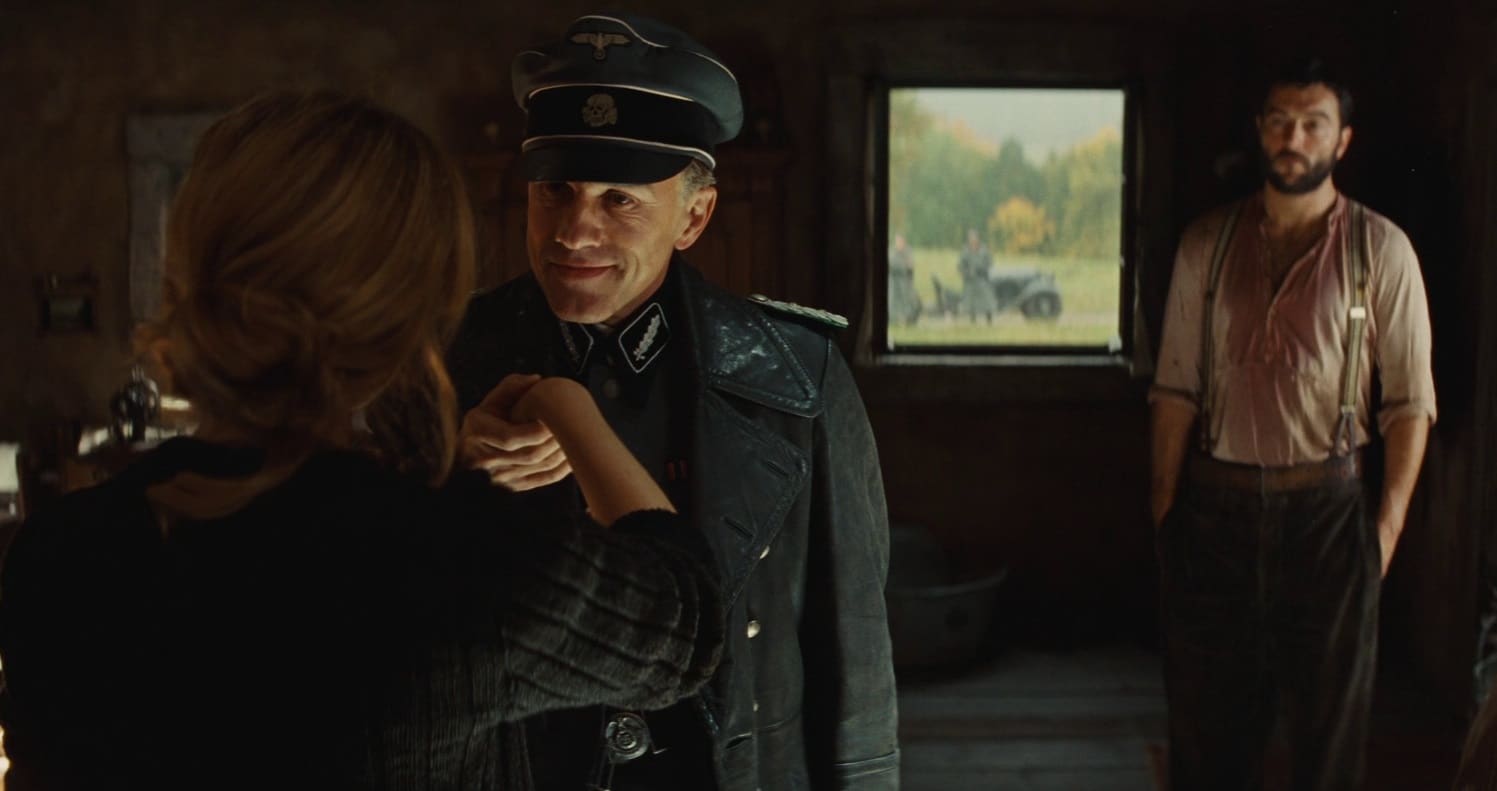 In our Genius Character Reveals series we examine scenes and moments where a film or TV show reveals a tremendous amount of character information in a compressed amount of screen time. This instalment focuses on Hans Landa (Christoph Waltz), the SS Colonel villain of Quentin Tarantino’s INGLOURIOUS BASTERDS.

While it shares its name with a 1978 Italian war film, INGLOURIOUS BASTERDS is entirely its own beast.

In Tarantino fashion, it is an ensemble film.

He establishes multiple groups of characters who are almost in their own separate movies, each with a different genre and tone. For example, the opening caption is a reference to Sergio Leone’s spaghetti Western:

ONCE UPON A TIME IN… NAZI-OCCUPIED FRANCE

Gradually, over the course of the film, these groups of characters are moved closer and closer to each other, until they explosively collide (literally) in the climax.

Tarantino himself has said that Landa might be his greatest character, and despite the stiff competition, it’s not hard to see why.

While Christoph Waltz had been steadily working in Europe, INGLOURIOUS BASTERDS propelled him to international recognition, including Golden Globe and Oscar wins.

Who is Hans Landa?

Hans Landa is a Colonel in the SS tasked with locating Jews in hiding in Occupied France.

He’s fluent in multiple languages, but beneath the educated, polite and even charming veneer is a cruel and sadistic man.

While he takes great pride in his work, he acts entirely out of self-interest, as the story demonstrates.

How is Hans Landa’s character revealed by the action and dialogue?

A farmer cuts wood while his daughter hangs laundry. She notices as a car approaching with two motorbikes.Her father gives brief instructions to his family in French.

Hans Landa, speaking in German, confirms with his driver that this is the property of Perrier LaPadite.

Landa gets out of the car, carrying a case. He asks to be left alone.

Speaking in French, he confirms with the farmer, Perrier himself, that it’s his farm. Landa politely introduces himself.

It is a pleasure to meet you, Monsieur LaPadite.

I was hoping you could invite me inside your home and we may have a discussion.

They head inside the farmhouse.

What do we learn about Hans Landa in this scene?

Hans Landa is a formidable, unnerving villain because he’s so intelligent.

It’s almost irrelevant whether or not he believes in the Nazi cause that he serves, because he can justify anything to himself:

What makes him so intriguing is exactly that; he’s not driven by an ideology… sometimes I feel compelled to say, “Well, he’s not even a Nazi.” Yes, he wears that uniform, but he doesn’t care. Not about Nazi ideology… He just understands how the world turns, and in that way, he’s three steps ahead of everyone else.

Tarantino himself describes Hans Landa as a detective. Every scene he’s in is some form of an interrogation, a piece of theatre.

There are many examples of this in this opening sequence and across the film. Perrier offers him wine, Landa asks for milk. Perrier smokes a pipe, Landa pulls out a bigger pipe. (Never underestimate the usefulness and significance of props!)

This is present even in this first, simple exchange outside.

Hans Landa arrives with a motorcade. He has the full force of the Nazi regime behind him should he call on it.

However, he chooses to enter the farmhouse by himself. Hans Landa considers his presence alone to be sufficiently intimidating, and he’s right.

Is this the property of Perrier LaPadite?

Why does Tarantino have him ask which farm it is twice? Landa already knows this information, and the name of the farmer doesn’t have any significance for the audience.

It demonstrates to the audience that Landa speaks multiple languages. It also shows that he’s already playing mind-games. They both know that Landa knows exactly where he is and has come here deliberately.

On the surface, Landa’s politeness cedes power to Perrier. He asks the farmer to invite him in. This is a bitter irony.

Both know that Perrier is powerless in this situation, completely at Landa’s mercy regardless of what he has actually done. (It’s only partway through the following scene that Tarantino reveals Shosanna and her family, hiding under the floorboards.)

Please excuse my rude intrusion on your routine.

Landa will continue with the ruse of civility as long as he amuses him. He’s a sadist. This is why, at the end of the sequence, he lets Shosanna run instead of following her. To him, it’s almost a game.

Tarantino also does something canny with subtitles here. When Landa speaks German, there are no subtitles; when he speaks French, it is.

Despite Landa’s dominance in this scene, this along with the opening images positions the audience with the French family.

While stupid or bumbling villains have their place (Tarantino has his share of these characters too), it’s difficult to make them as formidable a threat as a highly intelligent villain. What’s more terrifying than an evil Sherlock Holmes?

This speaks to the idea of colliding genres.

The group of Nazi hunters, and especially their leader Aldo Raine (Brad Pitt), are broad, comical. Unsurprisingly, the bulk of the film’s marketing focused around these characters and this section of the film.

Why is this an example of terrific screenwriting?

One key route to getting a script made into a film is to write great parts that actors want to play.

Stars want to work with Tarantino because of his great characters and dialogue. Through these, he’s made and rehabilitated the careers of so many.

Christoph Waltz now has his pick of Hollywood projects. However, few of the characters he plays (many of them villains) compete with Hans Landa.

A villain‘s introduction is just as important as the hero’s, if not more so. Audiences have seen all the moustache-twirling clichés.

Tarantino could stop at the SS uniform – a shortcut to saying a character is evil if there ever was one! – but he doesn’t. He could have Hans Landa storm the farmhouse with his team, guns blazing, but he doesn’t.

Instead, he builds a complex, challenging, iconic villain. This begins with this quiet but unbelievably tense exchange of pleasantries.

Hans Landa doesn’t represent the “banality of evil” exactly. Tarantino’s characters are anything if ordinary. But he shows the polite, charming, educated and self-rationalising form evil can take.