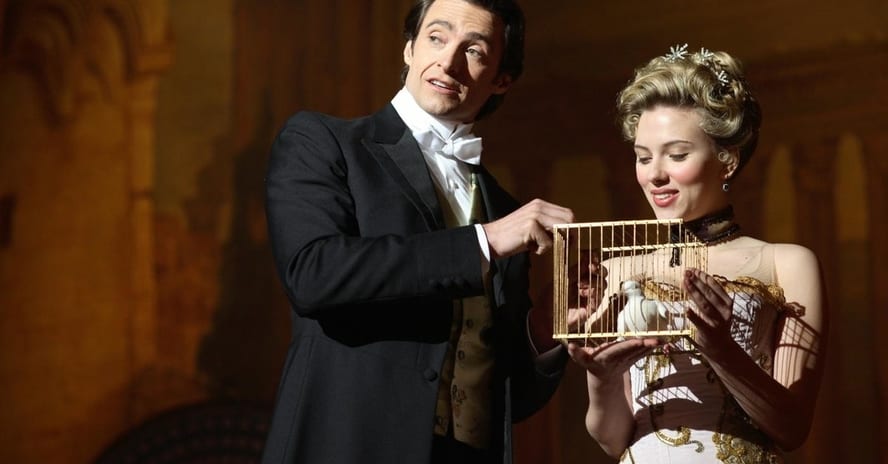 Foreshadowing is typically used to enhance the audience’s experience of the intended themes and messages of the movie or TV show they are watching.

Foreshadowing definition : a literary device in which a writer gives an advance hint of what is to come later in the story.

Throughout the history of cinema and TV, screenwriters and filmmakers have used foreshadowing as a means of engaging the audience with the story.

From a screenwriting perspective, foreshadowing can help lure audiences in by providing elusive clues as to the forthcoming plot and themes.

The following foreshadowing examples used by directors are great illustrations of effective and powerful foreshadowing.

The very nature of foreshadowing means that there are spoilers ahead!

The Prestige: Hiding In Plain Sight

THE PRESTIGE is a period drama centred around a conflict between two magicians –  Alfred Borden (Christian Bale) and Robert Angier (Hugh Jackman).

The story focuses on the conceptions of magic as it unfolds between these two competitors. We are shown the lengths they will go to unearth the dark truths behind their magic.

The bird cage trick scene is a smart and subtle moment of foreshadowing.

Robert Angier kills many cloned versions of himself by drowning them under the stage in a water tank. The audience in the theatre watching the trick are in awe of Angier seeming to teleport from the water tank to the stage.

However, really Angier is just making clones of himself, not performing a real teleportation at all and letting the clones drown in the water tank.

THE DEPARTED contains very subtle and easily missed foreshadowing. After a second viewing you’ll be able to see what the intended “X” foreshadows.

The “X” is visible throughout the film next to the characters it is intended to foreshadow the death of. The “X” is simply foreshadowing the deaths of each character sometime soon in the ensuing action.

Scorsese uses the “X” within the framing of the shot usually in the background of the surrounding architecture or as a shadow in the room.

The “X” is meant to symbolise the fact that in the world of policing and the mob, each character with an “X” is a marked man. Sooner or later they will die from their countering force.

The Hidden Meaning of "X" in The Departed

Famously, Christian Bale took method acting to another level by losing a whopping 63 pounds for the role of Trevor Reznik in THE MACHINIST. He plays a machine worker plagued with insomnia and turmoil in his mental well being.

The whole film surrounds the mystery as to who he really is and what has led to his current state of mind both psychically and mentally.

The pivotal moment of foreshadowing, which unfolds in the middle act, happens when Trevor takes a friend’s young son inside a horror themed carnival ride.

He sees a woman at a gravestone, a guilty hanged man, and a bloodied car crash. This foreshadows the reveal of what happened in Trevor’s past and the guilt he holds about it.

He accidentally killed a young boy in a hit and run the previous year. After repressing the guilt for so long, going to the carnival ride triggers heavy anxiety, weight loss, insomnia, and delusions.

In RESERVOIR DOGS, the plot is ultimately focused around who the police informant is within the heist gone wrong.

Another genius bit of foreshadowing is present in the opening sequence at the restaurant:

Further foreshadowing is present in the sequence involving the men in a room: 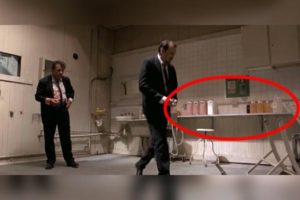 In FIGHT CLUB, The Narrator, played by Edward Norton, lets the audience know early on, “When you’re suffering from insomnia, nothing’s really real“.

Other foreshadowing examples from this film include the fact that most men in the film already know The Narrator without him having any recollection of meeting them.

But the most notable foreshadowing in the film is when The Narrator beats himself up in front of his supervisor.

This resonates when The Narrator realises and remembers the truth of his first fight with Tyler Durden. We see him being watched by confused bystanders as he beats himself up, not fighting Tyler as he (and we) initially thought .

Near the start of THE SHINING, Jack Torrance is in an interview with the manager of the hotel he is to be employed by. Jack’s job is to maintain the hotel throughout the winter period when it’s closed.

In a medium close up shot of Jack Torrance, you can see that his tie is green.

Taking a closer look you notice that the green tie’s pattern resembles that of the maze in the penultimate final act of the film. The subtle green tie foreshadows the maze as being the finale for Jack and his time at the hotel. 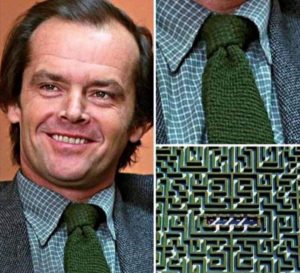 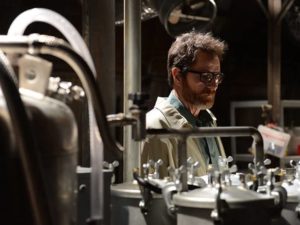 There is a small hint of foreshadowing that Walter White is going to die in the final ever episode of BREAKING BAD.

Right at the start of the finale episode, Walt is looking through the glove compartment of the car he stole to go back to New Mexico, when a cassette tape falls out. The cassette tape is “El Paso” by Marty Robbins.

The lyrics in the song being played at the start of the episode are what really foreshadows the final outcome for Walter White. After putting it in the tape deck and driving off, the lyrics can be heard:

“I saddled up and away I did go, riding alone in the dark. Maybe tomorrow, a bullet may find me. Tonight nothing’s worse than this pain in my heart”.

Walter’s death is foreshadowed as he begins the drive, riding alone, to rescue Jesse Pinkman, his final act of redemption. The one bullet which hits him after seemingly surviving the initial barrage of bullets is the conclusion to Walter’s epic story.

In the original GODFATHER, Sonny Corleone, the eldest son of Vito Corleone and Michael’s older brother is portrayed as a hothead, acting irrationally and impulsively.

Sonny’s aggressiveness serves as his foreshadowing. Especially after the assassination attempt on his father, his lack of constraint serves him and his family poorly.

When his sister is abused by her husband, Sonny beats him. Consequently, his angered brother-in-law snitches on Sonny to the opposing crime families.

Sonny is left as a boiling kettle waiting to explode sooner or later.

In contrast to Sonny, Michael Corleone is calm and smart with his decisions, leaving him a lot more aware of the dangers he is vulnerable to. 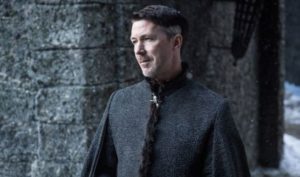 In GAME OF THRONES, Littlefinger makes a bold prediction to Robin Arryn, the son of his lover. He gives a monologue to the young man about the treacheries of life in the brutal world of Westeros.

Within the monologue he says…

“People die at their dinner tables. They die in their beds. They die squatting over their chamber pots. Everybody dies sooner or later. And don’t worry about your death. Worry about your life. Take charge of your life for as long as it lasts.”

This foreshadowing comes into play later that season with:

Upon being said, the monologue may not have seemed to have hold that much significance other than generic life advice.

The profound impact of the subsequent deaths that happened exactly as Littlefinger had said is foreshadowing at its most rewarding.

A STAR IS BORN - Official Trailer 1

In A STAR IS BORN, it feels inevitable from the start that Jackson Maine’s alcoholism will sooner or later catch up with him.

In the opening sequence, after performing a live show, the car in which Jackson is travelling in can be seen driving through the city billboards.

One of the electronic billboards is a rainbow coloured billboard which is filled with a row of nooses. 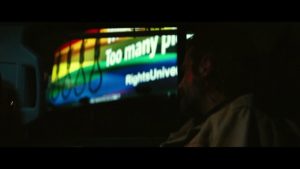 In GRAN TORINO, there is foreshadowing when the protagonist, played by Clint Eastwood, is reading a newspaper.

Walt Kowalski is very much opposed to the idea of integrating and communicating with the minority groups within his neighbourhood.

His direct neighbours are a Vietnamese family. Initially, due to his history of having fought in the Korean War, he holds racist stereotypes about them being a threat.

Walt laughs this off and takes no real notice. Ultimately, Walt changing ends up being the whole purpose to the story.

The family next door invite Walt over for dinner and build a relationship with him, teaching him about South East Asian culture. Walt then protects the Vietnamese family from violent gang members taunting the neighbourhood.

He finally conforms to the foreshadowing of the horoscope by making peace with those around him. Eventually, Walt sacrifices himself to expose the criminal gang members and bring safety to the neighbourhood.

In Edgar Wright’s comedy HOT FUZZ, foreshadowing is present in the sequence set at the village fete.

Tim Messenger, a local journalist claiming to have information for the police, is brutally killed by falling masonry as he’s standing waiting to see Sergeant Angel.

The foreshadowing of his death starts earlier when the village members speak about the disturbance that Tim’s journalism is causing.

Then, when Tim’s name is pulled out in a Tombola, the Compare says ‘Tim, your number’s up’. In the next moment Tim is killed.

The use of the term ‘your number’s up’, a shorthand for death, amps up the tension of the scene and provides some neat comedic irony.

In SHUTTER ISLAND, right from the get go we’re made to believe that Leonardo DiCaprio’s character, Teddy Daniels, is actually a real US Marshal alongside Mark Ruffalo’s character.

But the whole film contains foreshadowing to the truth that he is an actual patient on the island.

Foreshadowing includes Teddy Daniels not being able to remove his holster when entering the island.

Or the fact that in the whole film whenever Teddy needs a smoke and is about to smoke a cigarette, he is never the one lighting his own cigarette.

In THE SHAWSHANK REDEMPTION a scene with Andy and Red shows Andy talking about his dream to go to Mexico when he gets out of Prison.

Red tells him that it’s cruel to have such hopes whilst stuck in prison. He describes them as shitty pipe dreams.

Another pivotal moment of foreshadowing is the bible reference by warden Norton, who quotes “Salvation lies within”. 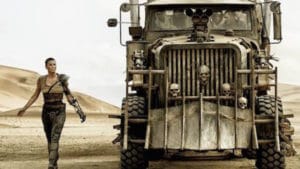 The story of MAD MAX: FURY ROAD focuses around one long chase through the desert.

The foreshadowing comes from a technical standpoint with the camera zooming in on one of the skulls on the beastly war rig vehicle.

Every time this happens, it serves as an indication that someone is going to die in the oncoming sequence.

A tiny moment of precision from the director, within non-stop action, serves to give the plot some depth in terms of foreshadowing the death of its characters.

4 thoughts on “15 Genius Foreshadowing Examples in Film and TV”