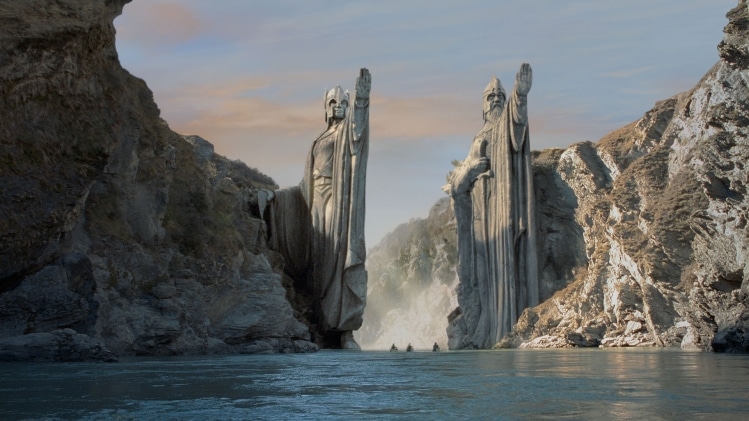 The wider British public are usually treated, once-a-year or so, to a slick piece of PR spin usually including the phrase “British film is booming” and citing major Hollywood releases as contributing to said boom. But the next time you sit down to watch a ‘British’ hit, consider whether it really is precisely that…

(IP) refers to creations of the mind, such as inventions; literary and artistic works; designs; and symbols, names and images used in commerce.

The truth is that from HARRY POTTER and JAMES BOND to FIFTY SHADES OF GREY and MAMMA MIA!, so many of the most iconic ‘British’ franchises – while often built on the work of a British author or writer or even shot and crewed here – are crucially financed and distributed by the Hollywood studios, and you don’t need to be an astro-physicist to work out where profits from these films head back to (clue: it isn’t us).

Here are 10 films based on British IP that we sold to America, and then poured a giant tidal wave of cash, largely into Hollywood coffers…

There’s plenty that’s British about the 2001 romantic comedy, from its basis in the novel of the same name by English writer, Helen Fielding, to the London and Home Counties locations in which it was largely shot. It did have an unquestionably American star in the title role, though – Texas native Renée Zellweger.

British author Roald Dahl’s 1964 children’s book had already been adapted once for film previously when Tim Burton took on directorial duties for the 2005 version, starring Johnny Depp as Willy Wonka and Freddie Highmore as the Golden Ticket-finding hero, Charlie Bucket.

The result was a far quirkier, and somewhat darker take than the 1971 version titled WILLY WONKA & THE CHOCOLATE FACTORY. Portrayed by Gene Wilder, Willy Wonka’s background was relatively unexplored in the 1971 film but for the 2005 hit, Burton and Depp were determined to discover what made Wonka tick. Cue a dark, emotional sub-plot about Wonka’s estranged father, played by Christopher Lee. Suddenly, all the ingredients for Burton’s box-office hit melted together leaving Warner Bros. with plenty of Golden Tickets to cash in. And yes, by ‘Golden Tickets’, this writer means dollars. Lots of dollars.

Many an adaptation may have been made of the tales of Sir Arthur Conan Doyle’s iconic detective, both on TV and film. However, few had the commercial clout of the 2009 film, which saw Guy Ritchie direct and Robert Downey Jr. take the role of Holmes – with Jude Law as Dr. John Watson.

Hot off the success of his superhero caper, IRON MAN, Downey Jr. brought all his charm, wit, and martial arts prowess to this slo-mo filled, punchy, quick-witted detective-thriller. Combined with the British villainy of Mark Strong as the sinister Lord Blackwood, and the equally ‘British’ – i.e. reserved, stiff-upper lipped, polite – Dr. Watson, Warner Bros. had another hit on their hands. Thanks, once again, to British IP.

Possibly the biggest global literary phenomenon of recent times was another product of Blighty, somewhat belying the prim reputation of our isles. However, when it reached cinemas, it was courtesy of Universal Pictures, and with an American actor – Dakota Johnson – as graduate Anastasia Steele.

What started out as Twilight Fan-Fiction, quickly set pulses racing as author E.L. James offended British sensibilities with her saucily detailed encounters between billionaire-playboy Christian Grey and Anastasia Steele. All the necessary elements were there for a Hollywood hit; steamy sex scenes, a raging fan-base, and hunky Jamie Dornan in the role of Christian Grey. With an opening weekend of over $85 million, Universal were seeing Fifty Shades of Green.

It may pay fulsome tribute to the songs of Swedish pop heavyweights ABBA and be adapted from a Broadway musical and distributed by Universal Pictures, but MAMMA MIA! actually owes much to the penmanship of British playwright Catherine Johnson, who wrote the original jukebox West End musical.

With the star-studded cast including three-time Oscar winner, Meryl Streep, ex-Bond, Pierce Brosnan, and Amanda Seyfried, it isn’t hard to see why the film was a hit despite some questionable singing from an ex-spy. Funny, feel-good and carefree, the winner did indeed take it all. The winner being Universal, and they took it all the way to the bank, all $610 million of it.

When Burton took the helm as director for another production culturally inspired by these shores – specifically the 1865 Lewis Carroll fantasy novel, Alice’s Adventures in Wonderland – he was rewarded with the most successful film of his career. It was produced in America by Walt Disney Pictures and distributed by Walt Disney Studios.

That’s right. ALICE IN WONDERLAND. $1.025 billion! We really should better protect our own IP!

In all seriousness, however, this smash-hit was yet another film in the long, long, long line of Burton-Depp collaborations, which saw Johnny Depp tackle the weird, enigmatic, and charismatic role of the Mad Hatter. Of course though, no Burton-Depp project would be complete without Helena Bonham Carter, who lent her immeasurable talents to the character of the oddly-proportioned Red Queen.

J.R.R. Tolkien would have surely never conceived of his 1937 children’s book The Hobbit becoming the unstoppable cinematic money-spinner that it did in the early 2010s, under the direction of Peter Jackson. Although it was distributed by Warner Bros. and largely produced by American studios, its ensemble cast was at least largely British, encompassing such talents as Martin Freeman and Ian McKellen.

Another Middle-Earth adventure, it attempted to rival the scope and scale of Jackson’s earlier THE LORD OF THE RINGS films. Although it fell short of the critical acclaim that the ‘RINGS’ trilogy received, there is no doubting that the resultant box-office takings left Warner Bros. sitting on a mound of riches not unlike those hidden beneath the Lonely Mountain. Of course, one wonders whether that pile is also guarded by a dragon like Smaug, but perhaps it is British IP that needs a Benedict Cumberbatch-voiced dragon to protect it from American studios so that British film might enjoy those profits.

THE HOBBIT’s route to becoming a blockbuster 21st century film franchise was only further smoothed out, however, by the prior success of the three THE LORD OF THE RINGS films, based on another J.R.R. Tolkien novel of the same name. Naturally, one of the all-time most ambitious film projects couldn’t possibly be entirely British, distribution being the responsibility of New Line Cinema and Elijah Wood taking the plum role of Frodo Baggins.

The films themselves however were not just financial big-hitters, they were also critical masterpieces. The final part, THE RETURN OF THE KING, scooped an astonishing eleven Academy Awards, winning every category in which it was nominated. The combination of practical effects, incredible performances, and a dedication to detail that Tolkein would have been proud of, all ensured a trilogy of fantasy epics that won fans and critics over. Alas, Tom Bombadil didn’t feature but with over nine hours crammed full of battles, friendship, and monsters, Jackson can easily be forgiven.

007 has come a seriously long distance since he was first realised in literary form by British author, Ian Fleming. He will take to the silver screen once again in the latest instalment, SPECTRE, which is released in November. Although many members of the cast are suitably British and the franchise is produced by a British company, Eon, distribution and financing comes in the very American form of Columbia Pictures and Metro-Goldwyn-Mayer.

With 24 Eon productions, 6 lead actors, and a franchise that spans 6 decades there is no mistaking that the exploits of suave, daring, super-spy James Bond continue to captivate audiences. Fast cars, unforgettable villains, and the world-famous Bond Girls, the studio knows how to keep providing fresh, fast-paced adventures despite drifting away from the novels. Whilst some Bond films have left us shaken with some truly emotional deaths, others have failed to stir us by going overboard on the action, yet the films still make many many moneypennies.

It’s incredible to think that Gloucestershire’s very own J.K. Rowling set the process in motion for the fantasy behemoth that is Harry Potter with the release of the first novel in 1997. But the resultant multi-billion pound worldwide receipts have been largely enjoyed by Warner Bros.

Fantastical world-building and an array of wonderful characters really did provide the magic for the most successful movie adaptation of all time. The eight films that were made based on Rowling’s seven books never failed to make more than $700 million at the box office. Such is the popularity of the films that by their high standards, 2004’s release, THE PRISONER OF AZKABAN, arguably flopped as it became the first and only HARRY POTTER film to fail to make $800 million worldwide!

The stellar, nearly all-British and Irish cast, featured established names such as Michael Gambon, Ralph Fiennes, and Jason Isaacs alongside the newer talents of Daniel Radcliffe, Emma Watson, and Rupert Grint. The result was a classic, almost timeless**, family-friendly franchise that truly did put a spell on the world.

**The CGI from the earlier films has dated, especially the troll in the Philosopher’s Stone.

You can read a brilliant piece of analysis/commentary (from several years ago) entitled What We Could Learn from Iron Man’s Masters, by producer Arvind Ethan David, by Googling “Arvind Ethan David Marvel” and clicking on the relevant ScreenDaily link. Enjoy!