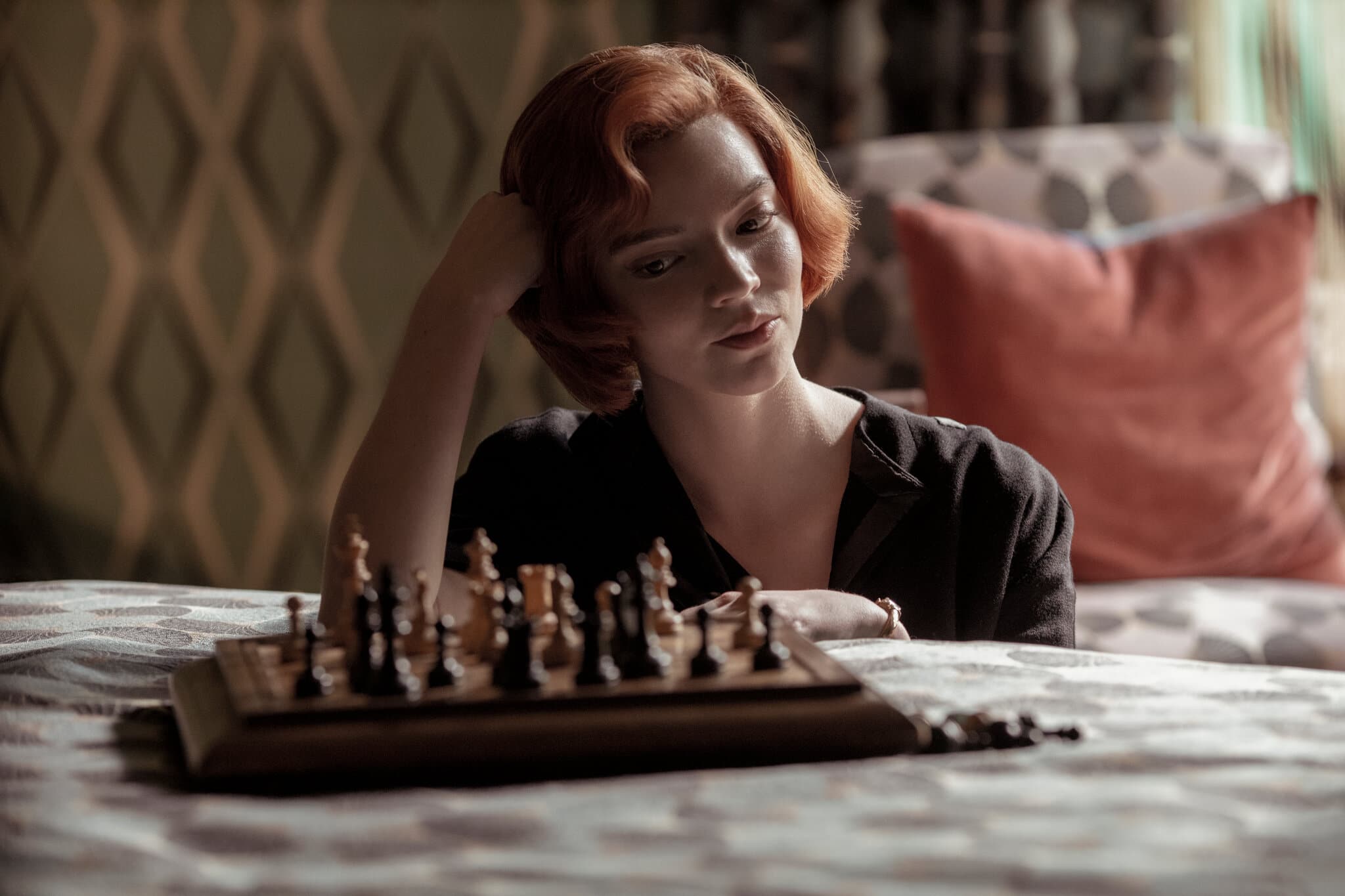 Welcome to Industrial Scripts’ Truly Original Characters series, an ongoing sequence of articles examining the most original characters to appear in both TV and film. This article focusses on Beth Harmon from The Queen’s Gambit.

Whether plucked from real life, an amalgamation of real people or just simply a genius stroke of creativity, these are original characters…

The tenth in our original characters series will look at one of Netflix’s most fascinating heroines, Beth Harmon from The Queen’s Gambit.

*The following article contains spoilers for The Queen’s Gambit*

Who is Beth Harmon?

Elizabeth “Beth” Harmon, an American chess prodigy in the 1960s, is the protagonist of The Queen’s Gambit. She is a genius, extraordinarily complex and the heroine of the series.

Tragically becoming an orphan at eight years old after being in a car crash that killed her mother, with her father unknown, Beth Harmon is placed in Methuen Home – an all-girls Christian orphanage.

Harmon gets her first taste of addiction when she is given tranquillisers whilst in the orphanage. However, it’s also the place where her talent for chess comes to the fore. Her traumatising time in the orphanage juxtaposes the potential she has in life. For example, the orphanage janitor is the one that teaches her the game of chess and her potential for it immediately shines.

As her talent quickly grows in the male-dominated world of chess, Harmon aims to become a Grandmaster.

Being adopted by Mr and Mrs Wheatley allows Harmon to get out of the orphanage and pursue her love for chess in the real world. However, Mr Wheatley turns his back on his newly formed family, leaving Mrs Wheatley and Beth Harmon on their own. Harmon and her adoptive mother start to slowly form a deeper emotional connection.

Though Beth Harmon is fictional, there is an essence of reality as the character is inspired by a combination of real chess prodigies, such as Diana Lanni and Bobby Fischer. This inspiration allows audiences to see a glimmer of realness.

In addition, Harmon presents an unusual heroine when it comes to female characters on-screen. With her trauma, substance abuse and being fearless with love, Harmon has the traits, instead, of many classic male protagonists. This gives Harmon an edge and originality, distinct from many poorly drawn heroines. She has her own struggles, yet in many ways, these feed her success.

Furthermore, her backstory and the way she copes with it through substance abuse raises the stakes. This is what makes her a great character and the series in general so compelling. Beth’s presence significantly raises the stakes of a relatively static game (chess). Losing a game is not just losing a game, it’s a potential tip over the knife-edge that Beth lives on.

Her appearance accentuates her uniqueness too, with an eye-catching style and overall image. Her eccentric style is used to portray her mood and thoughts and her striking fiery ginger cropped haircut adds to the unique figure she cuts on screen.

Creating a multi-dimensional character is not an easy craft. Characters need to go beyond a single purpose driven by the plot. There needs to be layers in order to generate a multi-dimensional feel. These layers can include how characters act, interact with others and why they do what they do.

In order to create a character that truly fascinates audiences, writers need to be able to scratch beneath the surface of character’s personalities and mannerisms. Multi-dimensional characters will have different angles to them. And these angles typically involve some form of profound inner conflict.

Throughout the series, Harmon is seen to have inner conflict via her relationships with others, addictions and outsider status. We are open to assume reasons for the way she acts, whether that’s because of her mother’s death, her experience as an orphan, her experience at school or being a young woman in a male-dominated world.

In short, nothing is ever easy for Beth, despite her obvious talent and success. This is what makes for rich characters. If we get the sense that things are easy for the protagonist, then it’s easy to lose interest.

The struggles and what lies beneath glossy images of success are what make characters engaging. There always has to be some root cause of the character’s complex personality. And this is exactly the case with Beth Harmon.

Beth is known for rarely connecting with people on a deeper or emotional level. However, when she does there is a lot to say about the relationship and how it shapes her.

Beth Harmon meets Mr Shaibel at the orphanage when she is just eight years old. With not many people she can rely on in her life at that moment, Beth becomes intrigued by Shaibel’s chess playing.

Shaibel teaches Beth how to play chess, making him important to her story.

Both Beth and Shaibel care for each other, even though Beth does not visit Shaibel or repay him for the entry fee for her first tournament. Shaibel is obviously proud of Beth, shown through his pinboard full of newspaper clippings of her chess successes.

Beth always reiterates just how much Shaibel meant to her. When she finds out about Shaibel’s death, her grieving finally brings her true feelings about him to the surface.

D. L. Townes is a keen chess player, journalist, photographer and Beth Harmon’s teenage crush. Meeting at her first chess tournament, they develop a complex friendship that follows them for life.

Throughout The Queen’s Gambit, Beth develops several close relationships – mainly with men due to the nature of the game – but Townes is one of the strongest. Becoming friends when Beth is just a teenager, Townes is one of the most consistent and dependable male figures in Beth’s life.

Their intense and mutual attraction to each other is what causes the complexity of their relationship.

However, it seems that Beth and Townes are actually better off as friends. After coming close to kissing each other, when Beth lets go of her romantic feelings, their relationship becomes healthier and growth occurs in both of them.

Benny Watts is Beth Harmon’s closest relationship to that of a soulmate. Both are American chess prodigies, though Benny is more arrogant by nature. Both are somewhat isolated by their genius and can relate to one another on a different level than others. Whenever they are together, the world doesn’t feel quite so lonely.

Benny and Beth’s relationship is complicated but flourishes from their competitive nature to win.

Over their ups and downs along the way, Benny and Beth create a friendship that’s about complicated love and learning. Bettering themselves, sharing their obsession and thriving on the potential of winning is what their relationship is all about.

They are characters that are almost too similar to work as a harmonious couple. But this competitiveness is what makes their relationship interesting, as well as furthering Beth’s complexity.

Beth goes through multiple challenges over the series, all of which inevitably shape her character. These challenges are exacerbated by her biggest challenge: substance abuse. If a challenge is too painful to deal with Beth turns to substance abuse through tranquillisers or alcohol.

Beth Harmon’s character is an independent, young female genius who thrives on competition. However, she carries demons that can sidetrack her from her potential. From episode one to the finale, Harmon’s growth and journey is evident in how she carries herself.

The yo-yo nature of Beth’s character arc is what makes her so interesting. Success does not bring harmony. There is something deeper driving her which cannot be fulfilled and which substance abuse takes the place of.

Beth Harmon has many strengths which her journey helps develop, including self-confidence, resilience, persistence and dedication. And this draws us to her.

Among her strengths, Beth has to deal with many weaknesses. Some of these weaknesses cross over in the challenges she comes across. For example, her extreme perfectionism and competitive nature turns into punishment if she loses a match of chess.

Again, this helps raise the stakes. Her weakness in giving herself a hard time upon losing makes losing a dangerous prospect. The drama would not be the same if she was a good loser.

Another key weakness Beth possesses is the coldness she can have towards others. She finds it hard to connect with people and open up to them. Instead, she can be quite closed off, preferring to be independent and self-reliant. There are only a handful of characters that Beth genuinely opens up to and even then, it’s not straightforward or instantaneous.

This is particularly true of TV. More work for the audience to do means longer engagement in the series. It’s a cliffhanger in this sense, the drama always keeping the audience on their toes and wanting more from the character.

Beth Harmon captured the hearts and fascination of many viewers of The Queen’s Gambit. A limited series about a chess prodigy in America during the 1960s may not sound extraordinary. However, Beth Harmon provides an unusual spin to a slow and quiet game.

With her tragic past and inner demons from a young age, Harmon’s character seems unique and original in the context of the chess world.

In this, Beth Harmon provides an original character that we cannot get enough of. She delivers an exciting and intriguing aspect to a game of chess. In a game that is slow and traditional, Beth brings more than a dash of the unconventional.

This article was written by Georgie Watts and edited by IS staff.