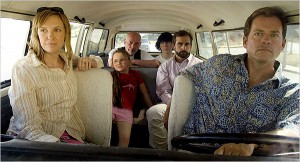 In 2000, screenwriter Michael Arndt had no credits, no agents, no publishing history when he took a year off to write “a salable script” that got him an agent and a deal fourteen months later, and five years after that, one of the big hits of 2006. Exclusive to this book are the complete shooting script, Arndt’s introduction and scene notes about his filmmaking experience, and a humorous essay “How to Write a Sundance Hit in Nine Easy Steps.” Also included are the full credits and a 12-page color photo section. Brazenly satirical yet deeply human, LITTLE MISS SUNSHINE introduces the Hoovers, whose trip from Albuquerque to Redondo Beach, California, to a pre-pubescent beauty pageant results not only in comic mayhem but in death, transformation, and a moving look at the surprising rewards of being losers in a winning-crazed culture. A runaway hit at the Sundance Film Festival, where it played to standing ovations, the film strikes a nerve with everyone who’s ever been awestruck by how their muddled families seem to make it after all. The Hoover family members are played by Greg Kinnear, Toni Collette, Steve Carell, Abigail Breslin, Paul Dano, and Alan Arkin. When they pile into their rusted-out VW bus and head west on a three-day tragicomic journey to the LITTLE MISS SUNSHINEbeauty pageant, the entire misfit family will change in ways they could never imagine.
Author: Michael Arndt Publisher: Newmarket Press ISBN: 978-1557047700 Format: Paperback Pages: 156 pages Product Dimensions: 22.9 x 17.5 x 1.3 cm

If you enjoyed this article, why not check out the KNOCKED UP script?