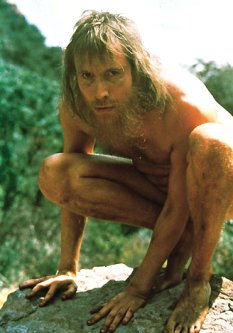 Charlie Kaufman‘s unconventional worldview is once again in evidence in this powerful satirical exploration of a civilization that idealizes both nature and culture. A philosophical burlesque about an obsessive scientist, a female naturalist, and their discovery of a man raised in the wild. HUMAN NATURE marks Michel Gondry’s feature film debut. He has directed the videos for Bjork since 1993, as well as videos for The Rolling Stones, Beck, Daft Punk, Chemical Brothers, Foo Fighters, Lenny Kravitz, Sheryl Crow, Cibbo Matto, and the White Stripes, among others. Produced by Anthony Bregman and Ted Hope of Good Machine, along with Spike Jonze and Kaufman, the cast includes Patricia Arquette (Lila), Rhys Ifans (Puff), Miranda Otto (Gabrielle), Tim Robbins (Nathan), Robert Forster (Nathan’s Dad), Rosie Perez (Louise), and Mary Kay Place (Nathan’s Mom).

In the interview, Kaufman reveals, in his trademark style, how he wrote his first screenplay post-BEING JOHN MALKOVICH “without the shackles of portals or head invasions,” detailed accounts of his inspiration for the distinctive characters, including the trainer who teaches elk to tap dance and influenced Nathan’s character, and his approach to writing dialogue (“Because Puff was so naive and childlike at first, it gave me the opportunity to write really direct, basic, emotionally-clean lines, like ‘I am Puff.'”) In the acclaimed Newmarket Shooting Script® series format, the book contains a facsimile of the shooting script, an interview with writer Charlie Kaufman, a 16-page color still insert, and full cast and crew credits.
Author: Charlie Kaufman Publisher: Newmarket Press ISBN: 1557045097 Format: Paperback Pages: 128 Product Dimensions: 23.7 x 18.2 x 1 cm

If you enjoyed this article, why not check out the GOSFORD PARK script?