Hi and welcome to Industrial Scripts!

We’re a leading film and TV consultancy delivering script coverage, training and other services to writers and filmmakers from around the globe. 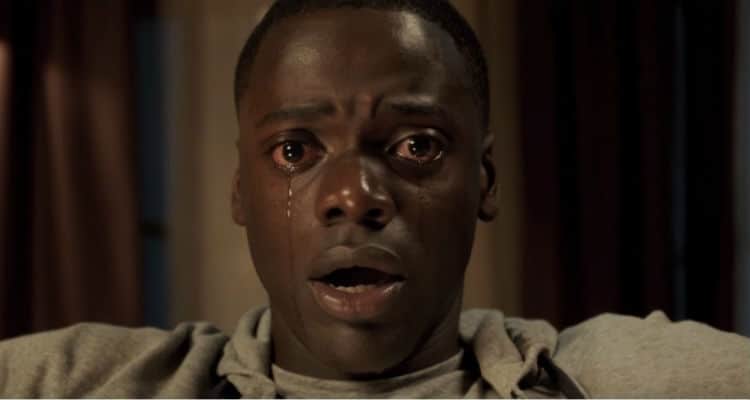 About the GET OUT script

Written and directed by Jordan Peele, Get Out is a 2017 American Horror film.

The film won Jordan Peele the Oscar for Best Original Screenplay at the 90th Academy Awards, making him the first African American to do so.

A young African American photographer, Chris, visits the country residence of his white girlfriend’s parents, but is soon made uneasy by their reception of him into their home.

Chris, and his girlfriend, Rosie, drive to her parent’s house, upstate. Whilst driving, Rosie hits a deer at speed.

A passing police cruiser asks for Chris’ I.D even though he was not the driver, causing Rosie to vehemently intervene, feeling that the the need for Chris to have to give identification is as a result of racial profiling.

After Rosie argues on his behalf, the officer stands down, without taking Chris’ details, thereby having no record of his having passed that way.

Soon, the behaviour of the estate’s black workers: gardeners, house maids etc. and the ignorant, though seemingly well intended comments on race from Rosie’s parents start to unsettle Chris.

Eventually, Missy convinces Chris to undergo hypnotherapy to cue his nicotine dependency. Whilst hypnotised, Chris experiences paralysis and falls into a realm known as ‘the sunken place’.

When he wakes he can barely remember, leaving the audience and himself unsure as to whether the episode was simply a nightmare.

The next day Missy’s parents host a party with lots of white elderly friends. Here Chris receives an unsettling level of admiration, with party goers complimenting his physique, his looks and his photography abilities.

Chris decides to call his friend, TSA agent, Rodd Williams to touch base on all the strange goings on at the house.

Chris says he recognises a young black man who is married to one of the elderly party goers. Chris photos the man and sends it to Rodd, who recognises the photo as Andre Hayworth.

When Chris photos the man, the flash from the camera appears to trigger him into a kind of seizure and his behaviour drastically changes. He screams at Chris that he has to ‘get out’.

Rodd decides to go to the police to report a conspiracy of rich up state white folks taking young blacks hostage and brainwashing them to work on their estates.

The police are not convinced, and for the time being, Chris is left on his own, with Rosie’s parents and their friends on the ranch.

The script is filled with subtle references to America’s bleak recent civil rights history, marking Peele out for his skill with imagery and satire.

This is an inspiring script that we think all screenwriters should read.

If you enjoyed this article, why not check out the CATCH ME IF YOU CAN script?