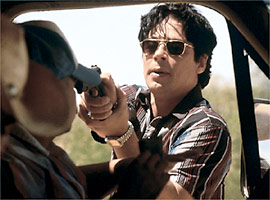 In the acclaimed Newmarket Shooting Script® format comes the complete script by Stephen Gaghan, a contemporary thriller set in the world of drug trafficking starring an ensemble cast that includes Michael Douglas, Don Cheadle, Benicio Del Toro, Albert Finney, Luis Guzman, Dennis Quaid, and Catherine Zeta-Jones. From a border policeman in Mexico caught in a web of corruption, to the conservative judge appointed by the President as the new anti-drug czar, to undercover DEA agents fighting a drug cartel, to the wife of a drug baron and the judge’s drug-addicted teenage daughter, TRAFFIC evokes the high stakes and high risks of the drug trade, as seen through a series of interrelated stories, some of which are highly personal and some of which are filled with intrigue and danger. The book includes the complete shooting script, an introduction by Steven Soderbergh and Stephen Gaghan, 30 film stills, and the complete credits.