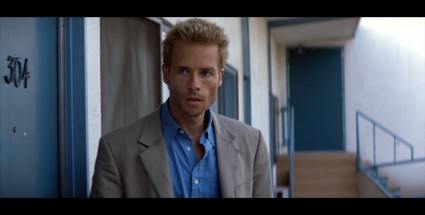 Christopher Nolan’s MEMENTO is an intricate, original, fascinating thriller, hailed by Philip French of the Observer as ‘one of the year’s most exciting pictures’. Its protagonist Leonard (Guy Pearce) is a puzzle, even to himself. He sports the trappings of an expensive lifestyle, yet he lives in seedy motels, and seems to be on a desperate mission of revenge to find the man who murdered his wife. Worse, Leonard suffers from a rare form of amnesia that plagues his short-term memory, so in order to keep track of his life, he must surround himself with written reminders, some of them etched onto his own flesh. In this state, Leonard finds that nothing is what it seems, and no one can easily be trusted.

FOLLOWING (1998) was Christopher Nolan’s micro-budgeted debut feature. Bill (Jeremy Theobald), a lonely would-be writer, spends his considerable free time stalking strangers at random through the streets of London. This vicarious form of ‘research’ takes an unexpected turn when Bill is caught out by one of his quarries: a suave cat burglar who introduces him to the art of breaking and entering. Soon Bill is striking up a liaison with a girl whose flat he has turned over. But Bill discovers too late that he is out of his depth.