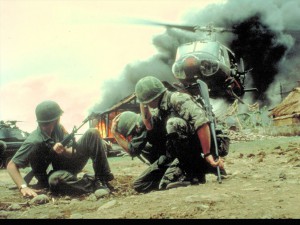 In May 1979, Francis Ford Coppola unveiled a ‘work in progress’ cut of his film, APOCALYPSE NOW, at the Cannes Film Festival. After winning the prestigious Palme d’Or, the convention-shattering film was nominated for eight Academy Awards and became a worldwide phenomenon.

In 2001 Coppola introduced a new version – wholly re-edited from the original raw footage – that included forty-nine minutes of never-before-seen footage: APOCALYPSE NOW: REDUX APOCALYPSE NOW relocates Joseph Conrad’s Heart of Darkness to the Vietnam War, focusing on the hazardous mission of Captain Willard to find and terminate ‘with extreme prejudice’ a renegade American colonel in Cambodia.

If you enjoyed this article, why not check out the ANNIE HALL script?