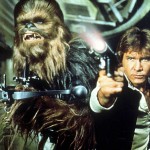 The phenomenal success of George Lucas’s first STAR WARS trilogy quite simply revolutionized the cinema; but what sets Lucas’s films apart from their legion of imitators is the quality of their screenplays. Lucas originally intended this trilogy to be a single film, but the epic scope of the story (combining hi-tech, sci-fi cinephilia with elements of Arthurian myth and mysticism) demanded that it be split into three. The first panel of the triptych is A NEW HOPE. A long time ago, in a galaxy far, far away, young Luke Skywalker leads a dull, isolated existence on his uncle’s homestead. One day, two androids, C3PO and R2D2, show up bearing a message from Princess Leia, the leader of the rebel forces engaged in a struggle against the vicious tryranny of the Empire – as personified by the rasping presence of Darth Vader. The message leads Luke to realize his heritage as a Jedi Knight. He sets out on a wild adventure across the galaxy and, together with Leia and rogue pilot Han Solo, attempts to thwart the Empire by destroying its menacing base of operations: the Death Star.
Author: George Lucas Publisher: Faber and Faber ISBN: 0571202993 Format: Paperback Pages: 184 Product Dimensions: 17.2 x 11 x 1.4 cm